There are 78 firefighters, nine helicopters and 32 pieces of heavy equipment working on this fire.

BC Wildfire Service reports that “the fire remains extremely active along the northern flank and is growing moderately in a north east direction.” 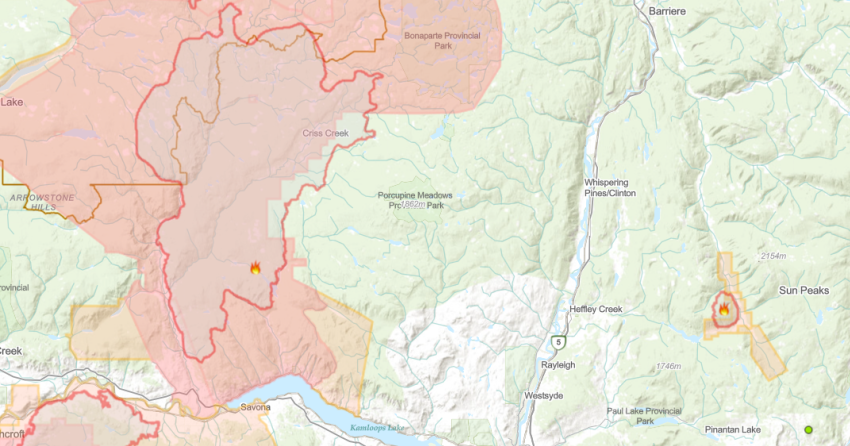 The agency is forecasting increased fire activity in the northern and northeast areas due to the high temperatures and low humidity.

BCWS reiterates crews are staying out of the northern area of this fire due to unsafe working conditions and higher priority areas.

However, BCWS is reporting that there has been no significant movement to the west and the western flank is showing minimal growth.

“As areas in the south are being secured, crews will move up along the eastern and western flank to create control lines and direct attack where possible towards the north.”

The north flank of the fire continues to show intense behaviour due to the hot and windy conditions.

BC Wildfire Serivce reports that there are currently no ground or air resources in this area due to other higher priority areas and unsafe conditions.

“There are no crews or equipment to redirect to properties in this area,” explains BCWS.

Crews set up structure protection equipment on properties in this area and will monitor their equipment once it is safe to do so.

BCWS stressed the importance of obeying evacuation orders so firefighters and other resources are not forced to keep people out of harm’s way. 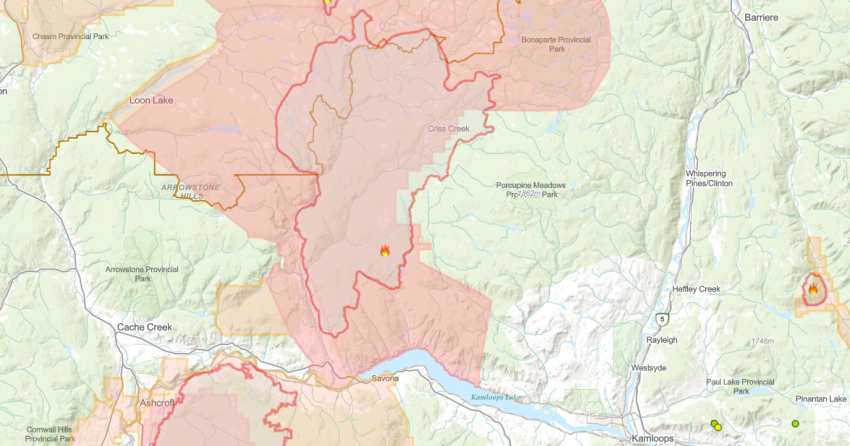 “Choosing to remain in an area that is under an evacuation order puts yourself, your family, and first responders in danger. It's not worth the risk.”

Today, there are 90 firefighters, nine helicopters and 38 pieces of heavy equipment fighting this fire.

(UPDATE: July 27 @ 10:25 am) - The Sparks Lake wildfire is an estimated 58,964 hectares in size, which is only a few hundred hectares bigger than it was mapped on Monday.

However, the BC Wildfire Service says "the north flank of the Sparks Lake wildfire is exhibiting intense fire behaviour driven by wind and (hot) temperatures."

Unfortunately, there are no ground or air resources assigned to the northern flank, which is due to a couple factors.

The intense fire behaviour is making suppression efforts unsafe, while there's also other higher priority areas of the fire that need more immediate attention from crews.

In this morning's update, the BCWS also addressed residents that are ignoring evacuation orders that are in place for this fire.

"If you've been placed under an evacuation order, that means you are advised to leave the area for your own safety and for the health and safety of firefighters," the agency said.

"People who remain in an area that's under an evacuation order may impede the ability of fire crews to fight a wildfire, because crews may be forced to stop fighting the fire to keep you out of harm's way."

Evacuation orders remain in place from the Thompson-Nicola Regional District for 296 properties, while another 298 are under an evacuation alert.

There are currently 116 firefighters, 42 pieces of heavy equipment and nine helicopters assigned to the fire, along with five structure protection crews. 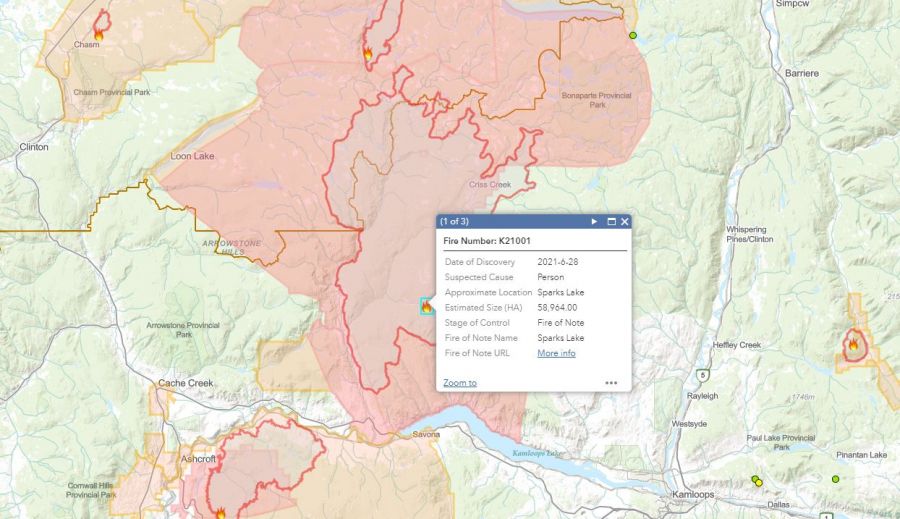 (UPDATE: July 26 @ 10 am) - The Sparks Lake wildfire, which remains the biggest active fire in British Columbia, continued to grow over the weekend.

The fire is now estimated at 58,172 hectares in size and remains out of control.

According to the BC Wildfire Service, crews have successfully secured the fire perimeter on the eastern flank from Tranquille Road to Frog Lake.

As areas in the south continue to be secured, firefighters will move up along the eastern flank to create control lines and direct attack where possible.

On the west flank, crews continue to work on patrol and mop-up in the Deadman Valley, as well as establishing containment from Sabiston Lake north towards the fire's perimeter.

"Heavy equipment supported by helicopter are building guard from Hihium Lake connecting to existing roads down to the Tobacco Creek Drainage," said the BCWS.

"The fire has not grown west toward Hihium lake, but small areas of coniferous fuels are catching but the main flank of the fire is not moving west."

There are 128 firefighters, 33 pieces of heavy equipment and 12 helicopters currently assigned to this fire, along with five structure protection crews made up of 29 personnel.

Evacuation orders remain in place for 296 properties, while the Thompson-Nicola Regional District also has 298 properties under an evacuation alert.

BC Wildfire Service now estimates the fire to be 55,815 hectares in size.

It remains the largest fire in the province.

"The increase in size is inclusive of growth over the last three days that has been mapped more accurately now," BCWS explained in an update last night.

"Most of this growth is in the northeastern flank of the fire."

Evacuation orders and alerts remain in place for hundreds of properties.

The fire – which is suspected to be human-caused – remains out of control.

In its last update, BCWS said it had 112 firefighters, nine helicopters and 43 pieces of heavy equipment fighting the fire.

"Crews are working to secure 100 feet into the fire perimeter along the east flank from Tranquille Road to Frog Lake," BCWS explained.

"South Carbine Hill is being monitored and all excursions south of control lines are being extinguished. Structure protection specialists are working in the Red Lake, North Gisborne, Vidette, Enright Lake areas to triage structures and set up equipment. Crews continue to work on patrol and mop-up in the Deadman Valley and will work on establishing containment from Sabiston Lake north towards the fire perimeter.

Although the fire is still estimated at 47,732 hectares, more properties are now being threatened by the blaze, which is currently the biggest in BC.

Residents living in Bonaparte Plateau and Copper Desert County are affected by this latest order, which you can learn more about here. 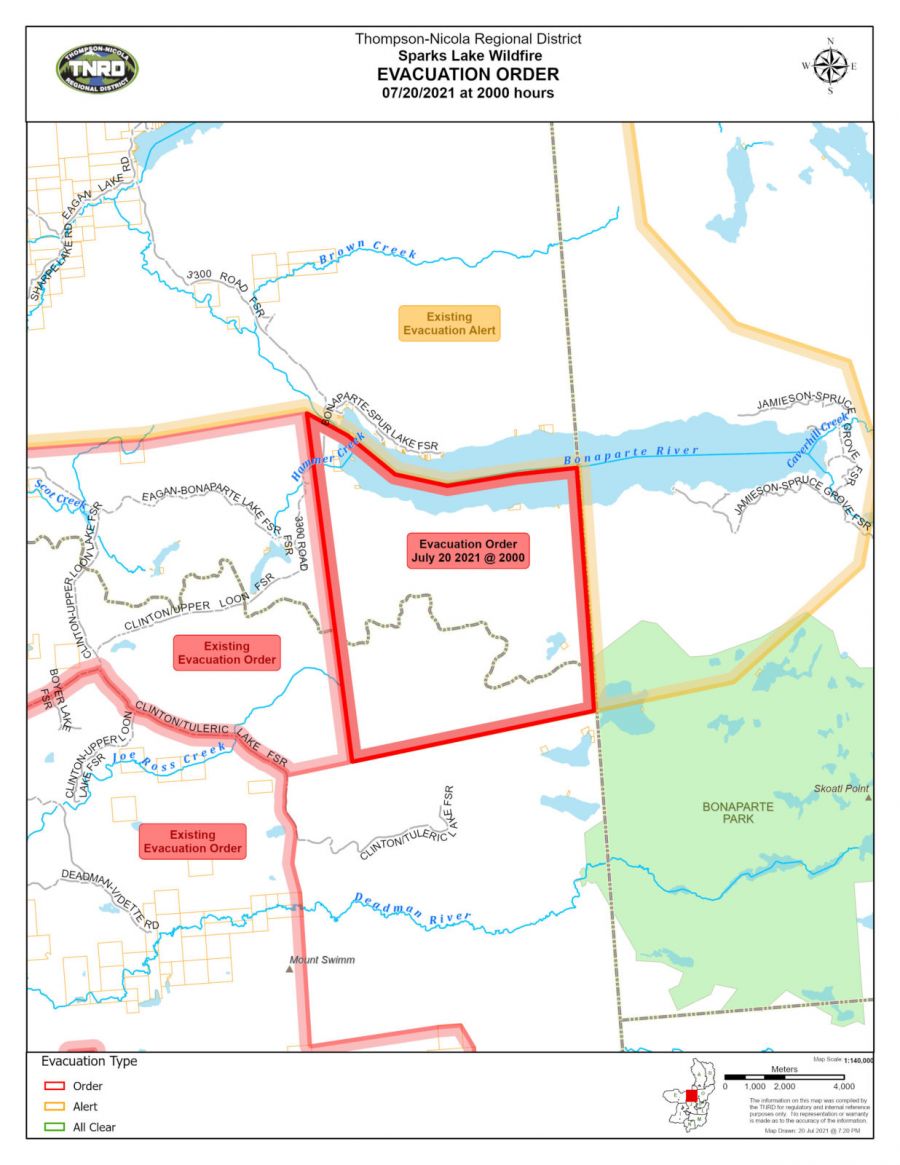 There are 140 firefighters, 49 pieces of heavy equipment and 11 helicopters currently assigned to the fire, along with an incident management team and additional support staff.

Multiple structure protection crews and specialists are also on site.

Crews continued to work on patrol and mop up on Tuesday, as well as establishing containment from Sabiston Lake north towards the fire's perimeter.

Planned ignitions remain a possibility in the Mount Uren area in the coming days, but it will depend on whether conditions are favourable.

It's only a minor increase this time, as the first has grown around 2,500 hectares to 47,732 hectares in size.

"(On Monday), crews completed some small hand ignitions in the Wadley Hill area to tie into some of the planned ignition from the day before," said the BC Wildfire Service.

"Today, crews will be working on mop-up in the Wadley Hill area, as well as along the east flank from Tranquille Road to Frog Lake. Crews will begin work to establish direct line by Frog Lake."

Crews will also work on patrol and mop-up in certain areas today, while also establishing containment from Sabiston Lake north towards the fire's perimeter.

Opportunities for an ignition operation will also be assessed today, as the BCWS is hoping to conduct them in the Mount Uren area over the next several days if conditions allow it.

There are 140 firefighters, 11 helicopters and 49 pieces of heavy equipment assigned to this fire, along with an incident management team.

Evacuation orders remain in place for 289 properties through the Thompson-Nicola Regional District.

On Saturday, July 1 crews were successful in their planned low intensity ignition operations to secure the containment lines around Wadley Hill.

“Structure protection personnel and crews are continuing to apply FireSmart principles and triage communities in the Red Lake, North Gisborne and Vidette areas,” says the BCWS fire of note page. 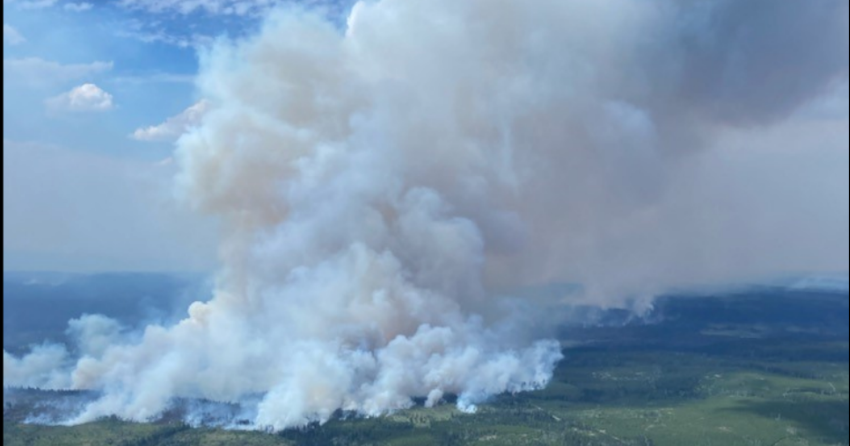 There are currently 131 firefighters, 11 helicopters, 52 pieces of heavy equipment and an incident management team working on this fire.

The evacuation order for 289 properties remains in place and 298 remain on alert.

Heavy smoke in the area has made that process difficult over recent days, but visibility improved enough on Wednesday night to give air crews a chance to re-assess the perimeter.

The BC Wildfire Service says active fire behaviour has been seen on the southwest and southeast flanks over the past 72 hours. 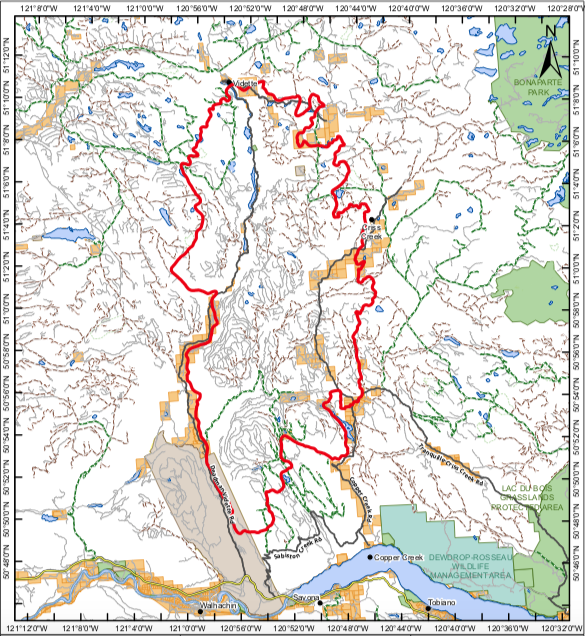 "Heavy equipment is continuing to prepare the Sabiston Forest Service Road for planning ignitions set to occur in the area."

There are currently 90 firefighters, 10 helicopters and 58 pieces of heavy equipment assigned to this fire.

Evacuation orders remain in place for 289 Thompson-Nicola Regional District properties, while another 298 are on evacuation alert.

You can find out more on the TNRD website.

It's been just over two weeks since the fire north of Kamloops Lake was discovered and it remains out of control.

Visibility has been hampering suppression efforts, but light winds are expected to improve that today, although it could also result in increased fire behaviour.

The size estimate could jump once the smoke clears enough to get updated mapping on the fire.

There are 125 BC Wildfire Service firefighters assigned to the blaze and they're getting support from 58 pieces of heavy equipment and 10 helicopters.

The areas around Frog Lake, Red Lake and Avery Hill continue to be priorities for crews.

Evacuation orders remain in place for 289 Thompson-Nicola Regional District properties, while another 585 are on evacuation alert.

You can find out more on the TNRD website.

(UPDATE: July 13 @ 9:58 am): Another 110 properties have been issued evacuation orders because of the Sparks Lake wildfire.

"If you are in the described area, you must leave immediately," the regional district said.

According to the latest update, the fire is being dealt with by:

(Original story: July 13 @ 5:30 am): Another nine properties have been made the subject of an evacuation order as the Sparks Lake wildfire continues to burn out of control.

It said it was doing so "because of the potential danger to life and safety." 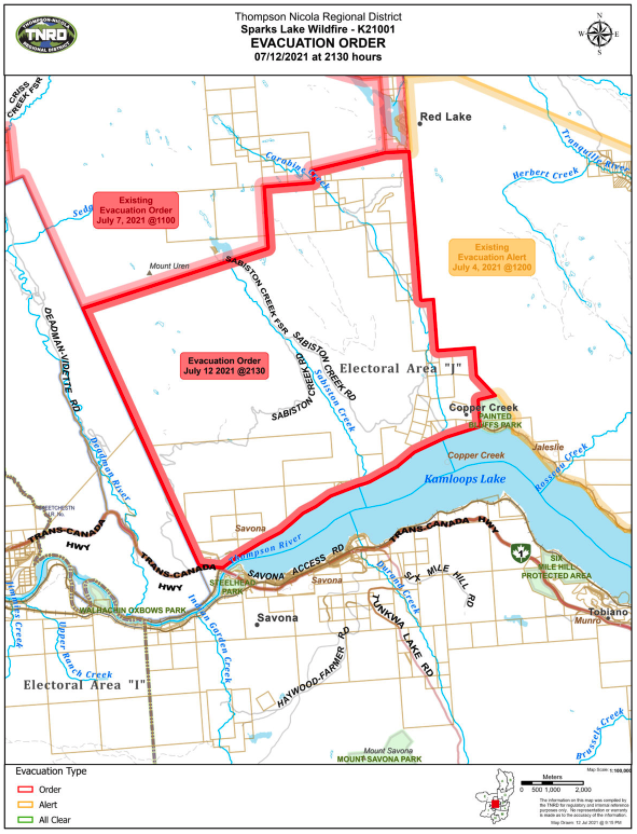 The following properties are affected:

The fire, which was discovered on June 28 and is thought to be human-caused, is now at 40,267 hectares. 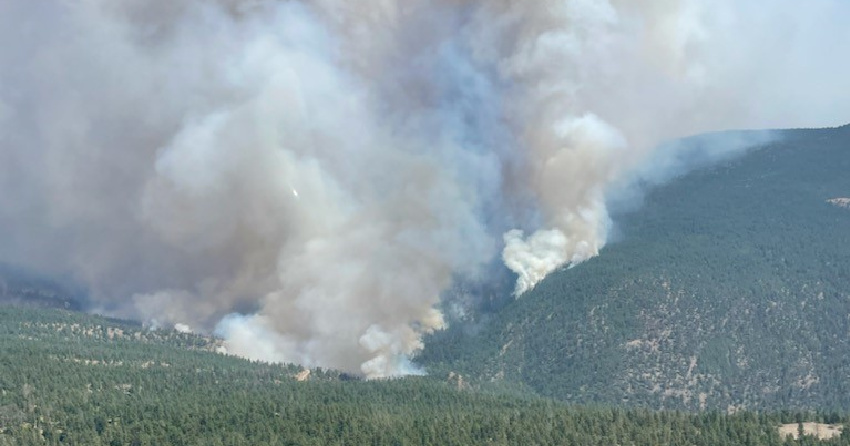 It added: "Air tankers provided support on the west flank near Split Rock, while helicopters worked in the Frog Lake area on the east flank."

According to BCWS's latest update, there are 128 firefighters, 10 helicopters and 60 pieces of heavy equipment battling the fire.