(UPDATE: Sept. 26 @ 3 p.m.) - The death of more than 40 birds that plummeted to the ground in Delta last week has been explained by the Environment and Climate Change Canada's Wildlife Service.

A statement from the organization says it was a natural occurrence that caused the deaths, as the starlings were being chased by a much larger bird.

Attempting to avoid their predator, the cloud of birds swooped toward the ground before pulling back up.

However, the tail end of the swarm didn't manage to pull up in time and about 200 birds hit the round, killing 42 of them on impact.

A necropsy was conducted by a veterinarian pathologist with the B.C. ministry and agriculture, which confirmed this explanation.

The cause of death was a chest injury and there was no evidence of underlying infectious disease or intoxication.

European starlings are known to form very large flocks and execute these swooping and whirling patterns, called a murmuration, to avoid a predatory bird.

Kevin Beech was driving in Tsawwassen on Friday, Sept. 14 when the bizarre incident happened.

He says that dozens of birds just started to hit the ground around his vehicle and it was clear they were either dead or dying.

As a result, the Canadian Wildlife Service, officials with the provincial ministries of environment and forests and other officials are investigating. 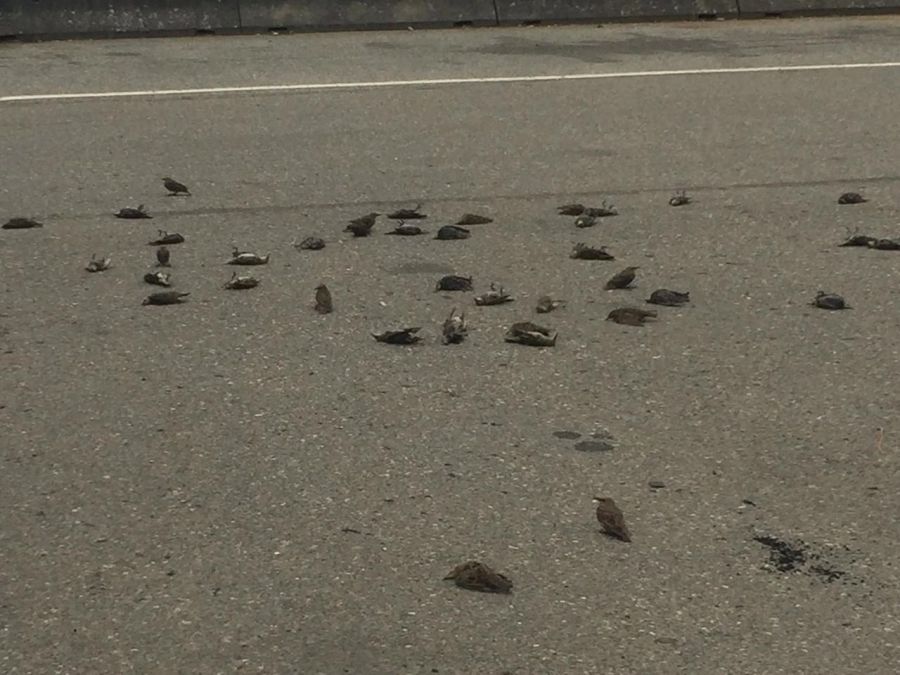 Laurie Wilson of Environment Canada says the remains of 42 European starlings have been collected from the scene.

They’ve now been sent to a lab in Abbotsford in hopes of determining why they died.

According to Beech, there was nothing unusual about the weather or other conditions that day and described what he saw as “really, really creepy. Like Alfred Hitchcock creep.”