(UPDATE: Nov. 15 @ 6:40 am): Vancouver police say they've identified the suspects who threw maple syrup on an Emily Carr painting and glued themselves to a wall at the Vancouver Art Gallery over the weekend.

Sgt. Steve Addison says an investigation is underway and officers will be speaking to witnesses, reviewing security video and assessing the cost of the damage.

The Vancouver Art Gallery says in a statement that Carr's "Stumps and Sky" painting suffered no permanent harm.

It quotes director and CEO Anthony Kiendl as saying the gallery "condemns acts of vandalism" towards works of cultural significance in its care, or in any museum.

Kiendl says the gallery supports free expression, but not at the expense of suppressing others' ideas and artistic expression, or inhibiting people from access to those ideas.

Don Marshall, a spokesman for the environmental group Stop Fracking Around, says the protest was intended to focus public attention on the climate.

Addison says that after police finish collecting evidence, they will move forward to Crown counsel for review and approval of charges.

(Original story: Nov. 12 @ 2:32 pm): Climate activists calling for an end to a gas pipeline project in northern British Columbia threw maple syrup on an Emily Carr painting and glued themselves to the wall at the Vancouver Art Gallery.

A spokesman for the environmental group Stop Fracking Around says two activists splashed maple syrup on Carr’s painting "Stumps and Sky," which is on display at the gallery.

Don Marshall, speaking for the environmental group, says the protest action at the museum aims to focus public attention on the global climate emergency.

He says the protesters are demanding an end to the Coastal Gaslink Pipeline project, currently under construction from Dawson Creek to Kitimat on BC’s north coast. 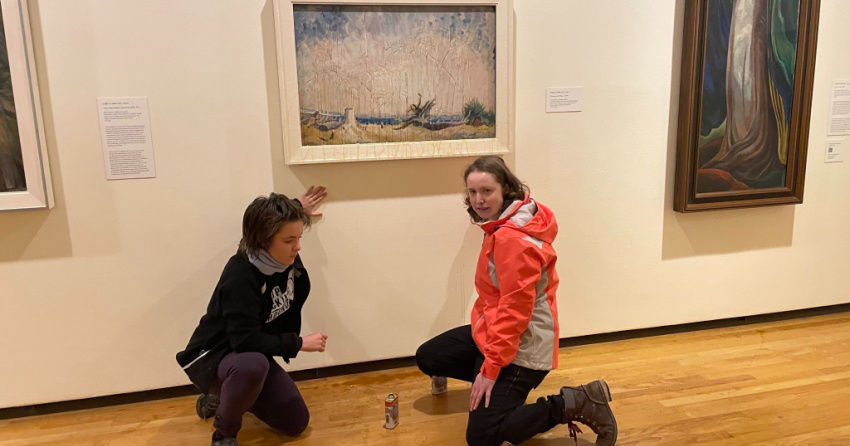 Marshall says protesters are targeting works of art around the world because too little is being done to stop the deadly progress of human−caused climate change.

The Vancouver Art Gallery or Vancouver Police Department were not immediately available for comment.

"It’s just a question of trying to get the public and especially our leaders to actually respond to the climate emergency which Canada has declared," says Marshall in an interview. "That’s the logic behind it."

This report by The Canadian Press was first published Nov. 12, 2022.