PHOTOS: The faces of the firefighters battling the Keremeos Creek wildfire

Today, the temporary encampment that materialized Sunday at Penticton's King's Park to accommodate up to 100 structural protection firefighters and forestry management specialists battling the escalating Keremeos Creek wildfire is disappearing. 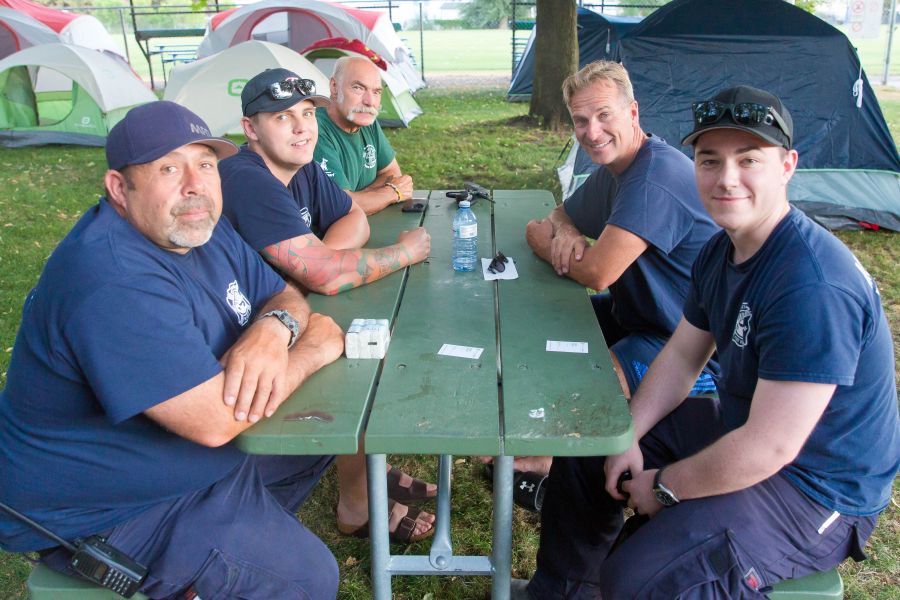 The camp is made up primarily of municipal, district and city firefighters and specialists -- and their vehicles and gear -- summoned here this past weekend from across the province to engage what has now become a 2,790-hectare monster in extremely difficult terrain. 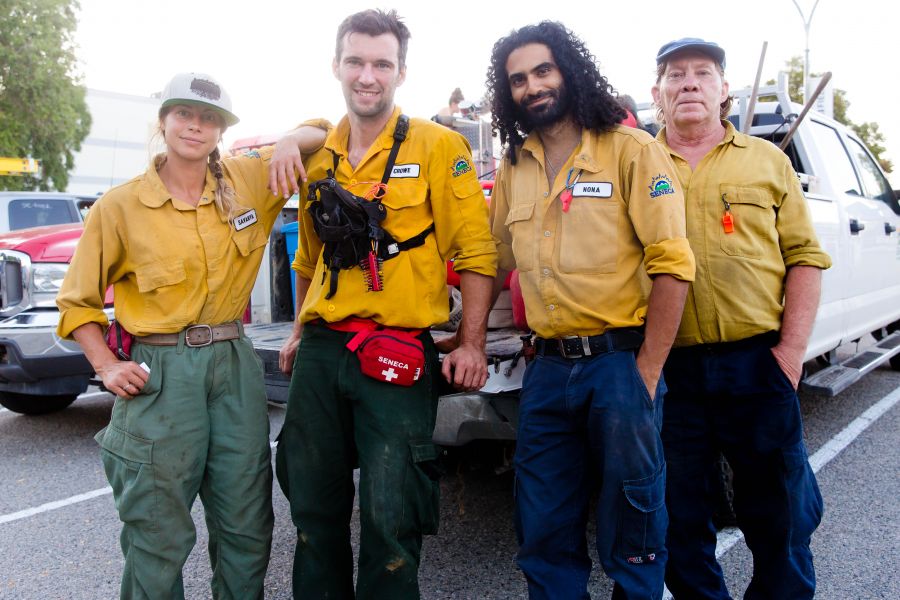 But today the folks stationed at King's Park are being moved to an already established firefighter camp (known as a "base camp") adjacent to the Oliver airport -- the same locale used during the 2021 fire season. There, they'll join forces with firefighters and members of the British Columbia Wildfire Service. 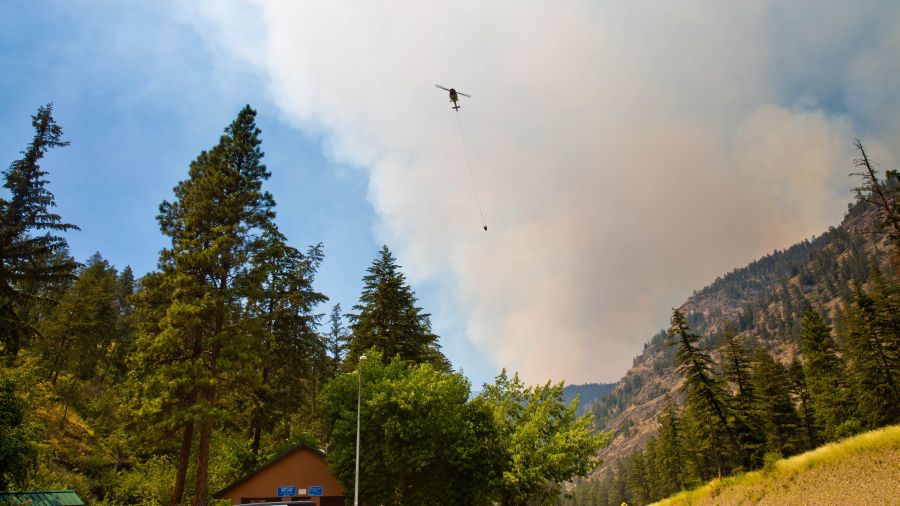 "We're moving into one spot where we already have a base camp," said Saanich Fire Dept. Captain Craig Ford Sunday evening at the King's Park setup. "Food, facilities, showers, all that sort of stuff. Logistically and operationally it just makes more sense. BCWS and these guys all in one place." 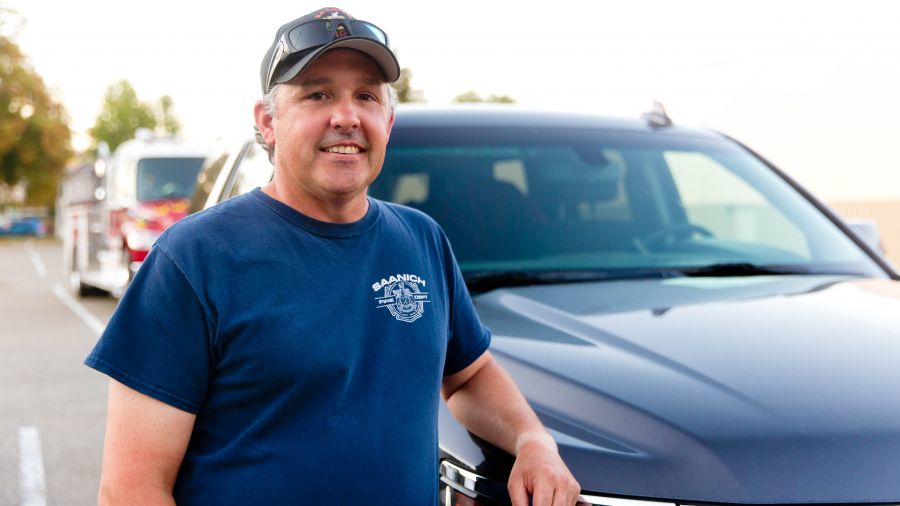 Capt. Ford was one of several firefighters PentictonNow spoke with and photographed Sunday evening at the King's Park camp. Our goal? To give our readers a chance to see some of the faces and learn some of the names of the people literally wading into the line of fire.

"I'm the task force leader here on the Sheep Creek area of operations," said Kirk Corby of Victoria Fire Rescue. "I look after structural offense. I look after apparatus." 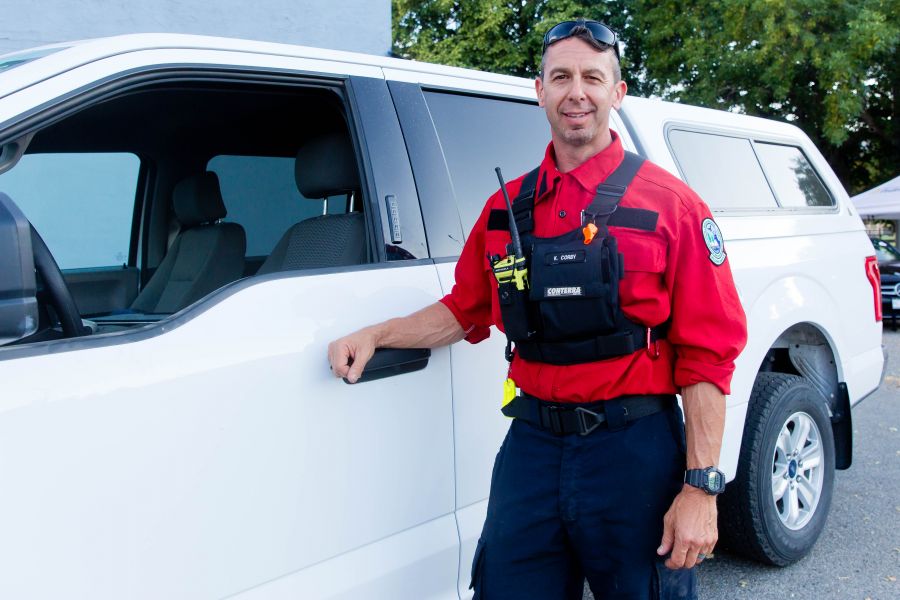 Corby admitted the fire is larger than he expected when he arrived.

"But I think all the people are in place," he added. "We have made structural defence plans for the area and all the homes up there and right now the objective is to bring all those resources in and set them up where they're needed. 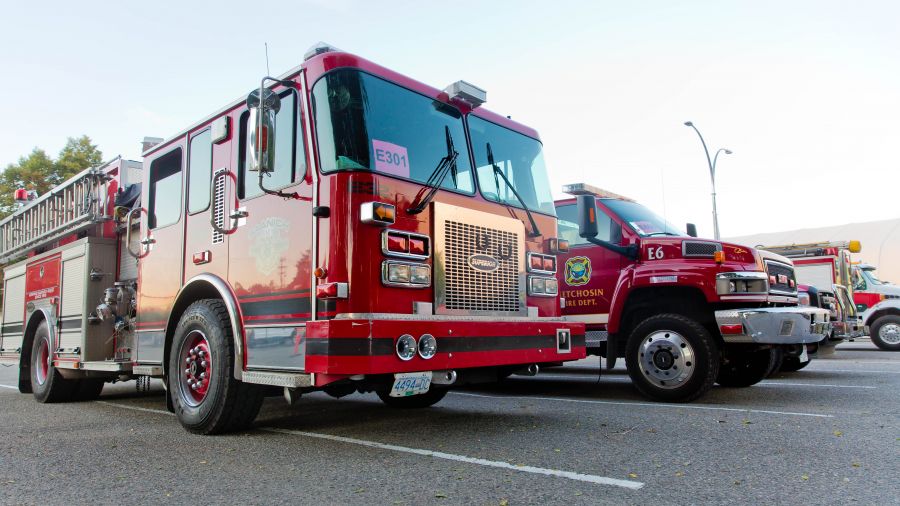 "The wind shear in the valley, nothing is prominent in one direction. So what they're doing is called a dirty burn. So we have fingers all over and where those are encroaching upon structures, that's where were putting our priorities."

Kymo Van Ores, part of a large and friendly crew from Duncan's "Warriors Alpha 200," schooled us on numerous aspects of fires and firefighting. 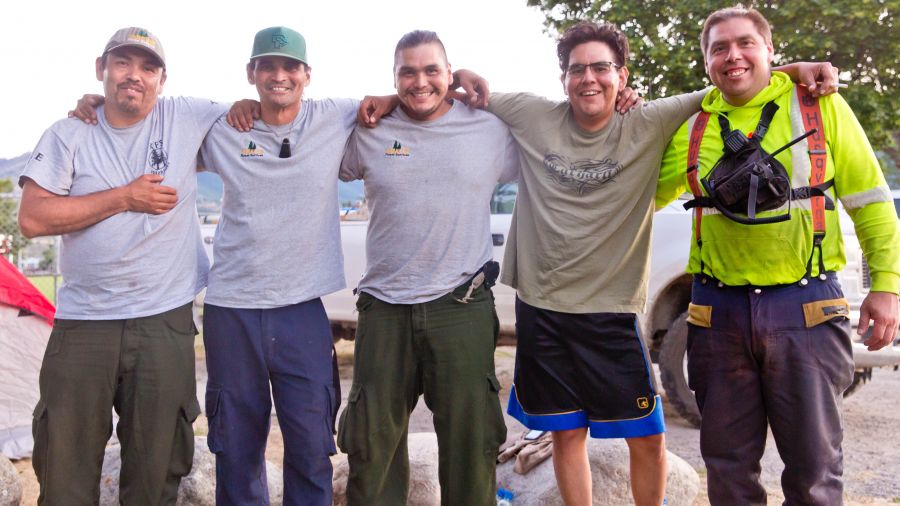 He had us observe the clouds in the sky and the colour of the smoke from the fire in the distance. Was it light grey? Medium gray? Dark grey? And from that we learned even more.

"In this new age of global warming," he said, "there's a new age in firefighting too.

"It's not as straight ahead as it used to be. We're doing a lot of different techniques and styles. Like coming in and doing a backburn swath before the fire gets there is one way to take the guts out of it.

"It doesn't always work, but we're only human." 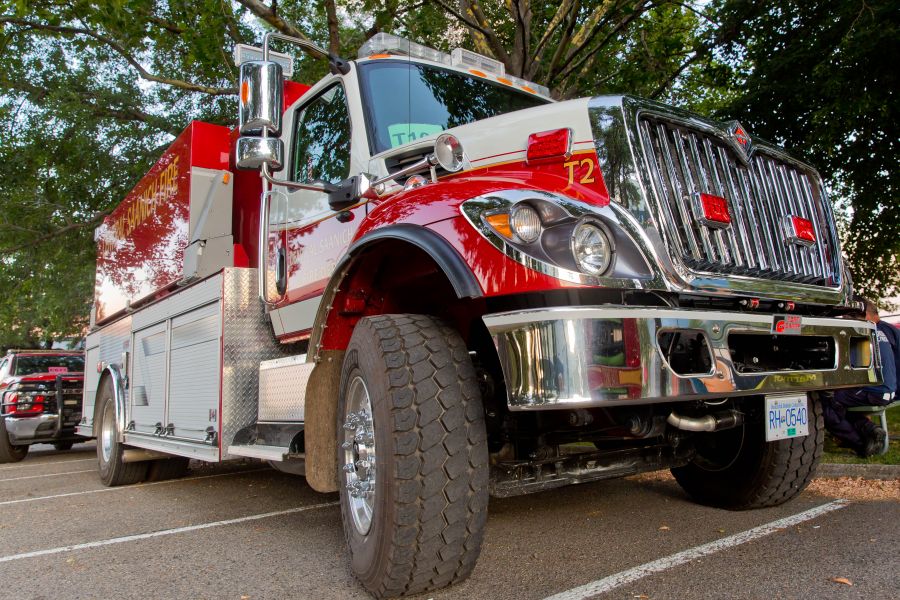 We caught up with Joshua Westcott of the Hope Fire Dept. as he jumped in his truck and prepared to motor away. 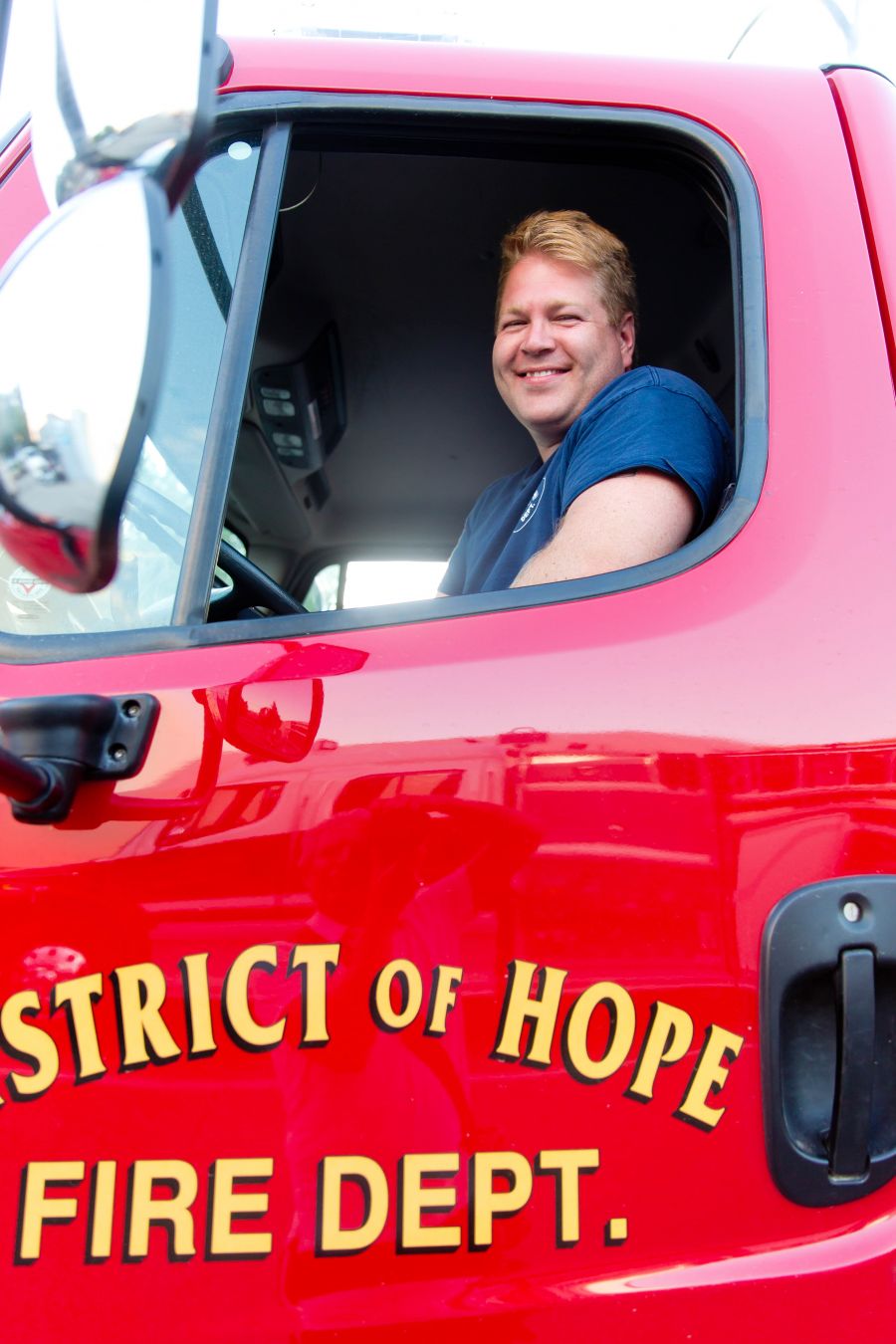 "The fire is bigger than it looks from the outside," he said.

Tyler Bergen of Lake Cowichan Fire Dept. arrived Monday morning at 4 am and called his first day out there a time of "learning." 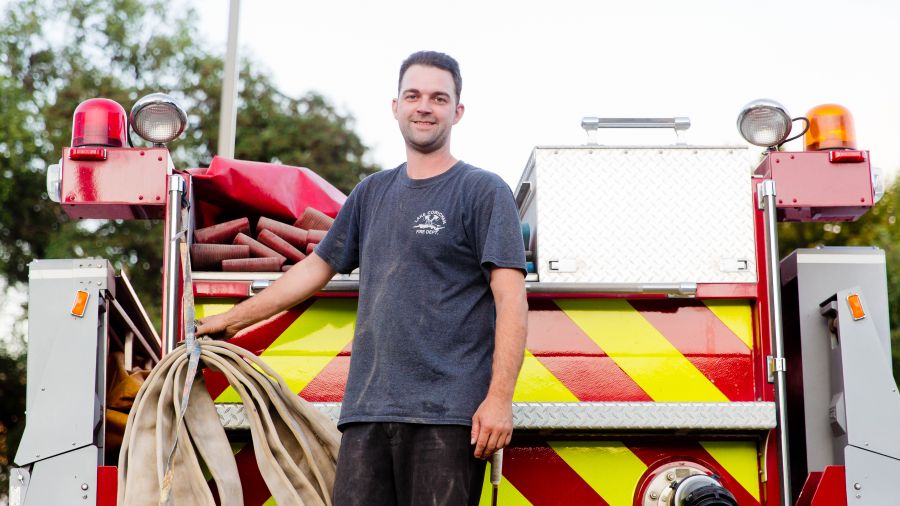 Chandler Kerr of Cowichan Bay Fire Recue said this was his first time "on deployment." 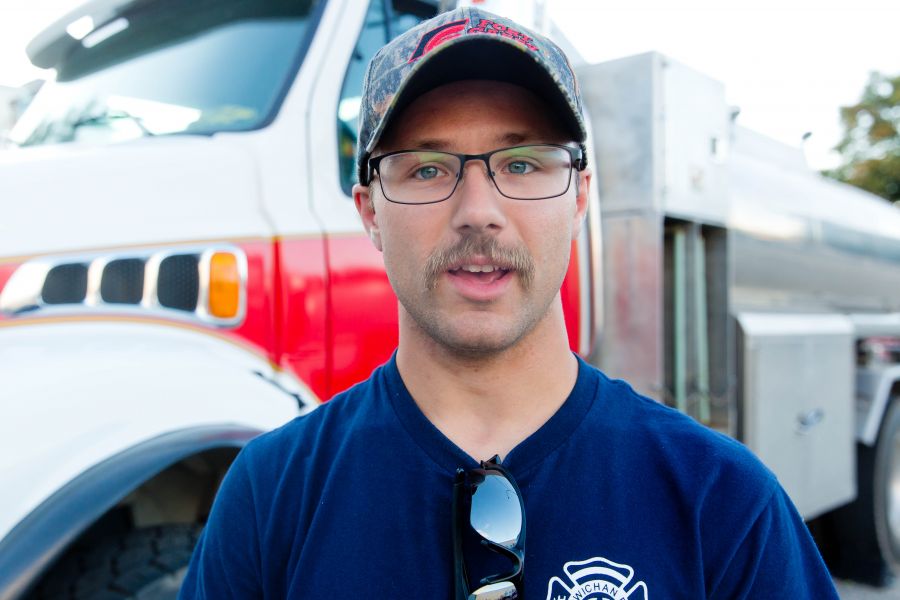 "They reached out to our chief and asked if we were able to send a crew out," he said. "The page to our fire hall went out at noon and we were on the 7 pm ferry out of Victoria. Now we have three tenders (trucks that transport water) here."

"It's a good experience for me." 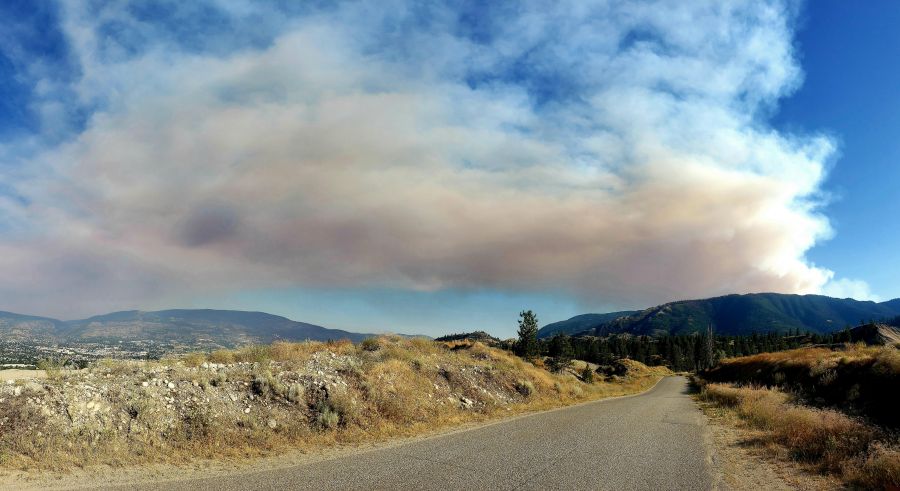 Just before we left the camp, several members of the Hernes family of Penticton (Brooklyn, Brody, Chloe, and mom Tricia) and friend Brooklyn Neufeld showed up with a homemade sign and a whole bunch of home-baked cookies and muffins. 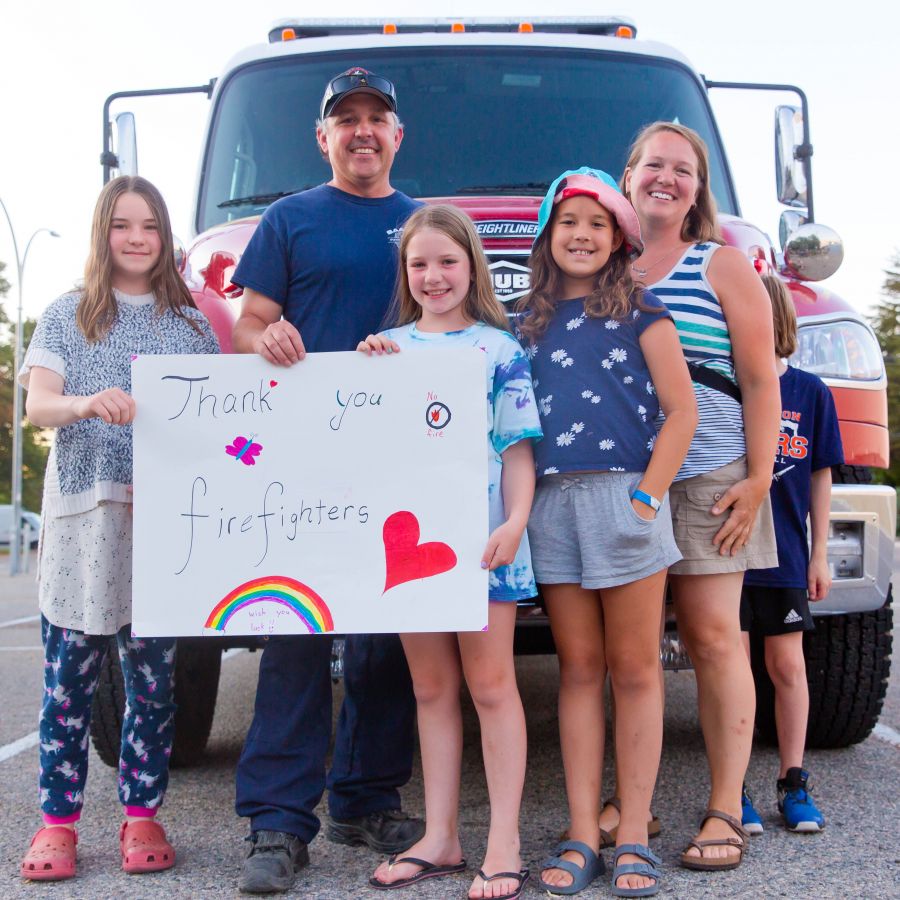 Capt. Ford, who we met earlier, was more than happy to accept them.

"We drove past here earlier today," said Tricia, "and noticed they're camped here and we just wanted to do something. 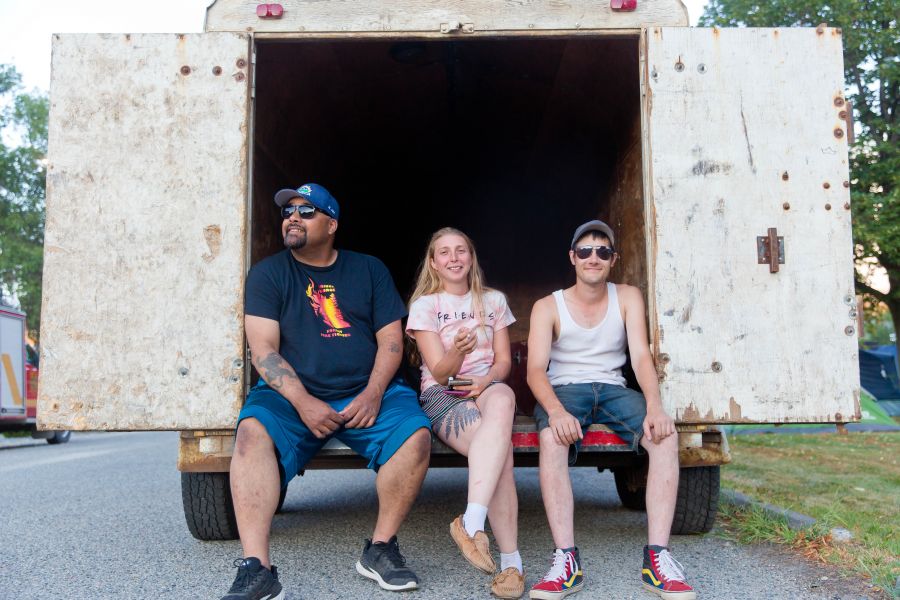 "There's not much we can do when it comes to the fire, so we just wanted to show our appreciation, knowing they need stuff like this."