Wess Campbell is a big part of the Summerland Health Care Auxiliary, a committed group of Summerlanderers (Summerlandites?) who specialize in raising money for regional health care. 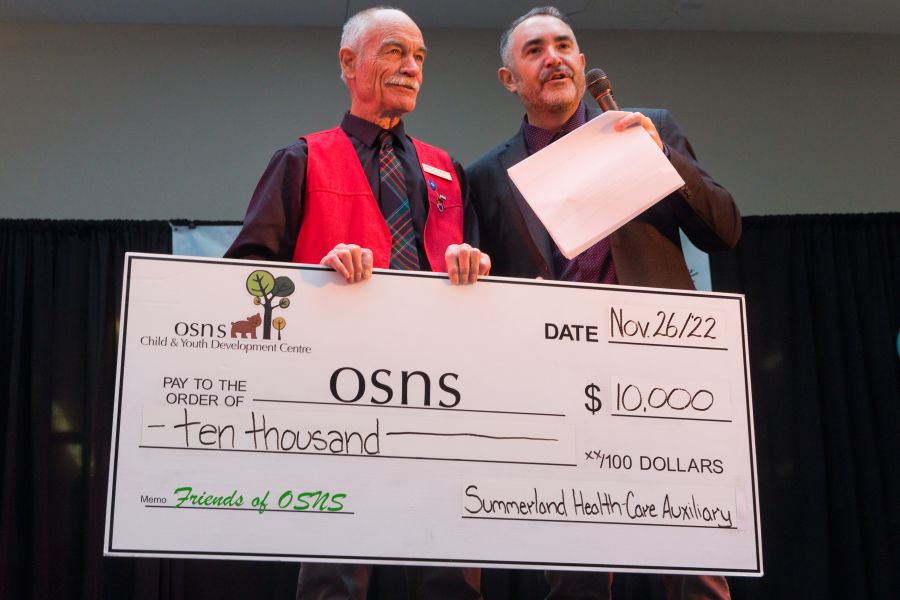 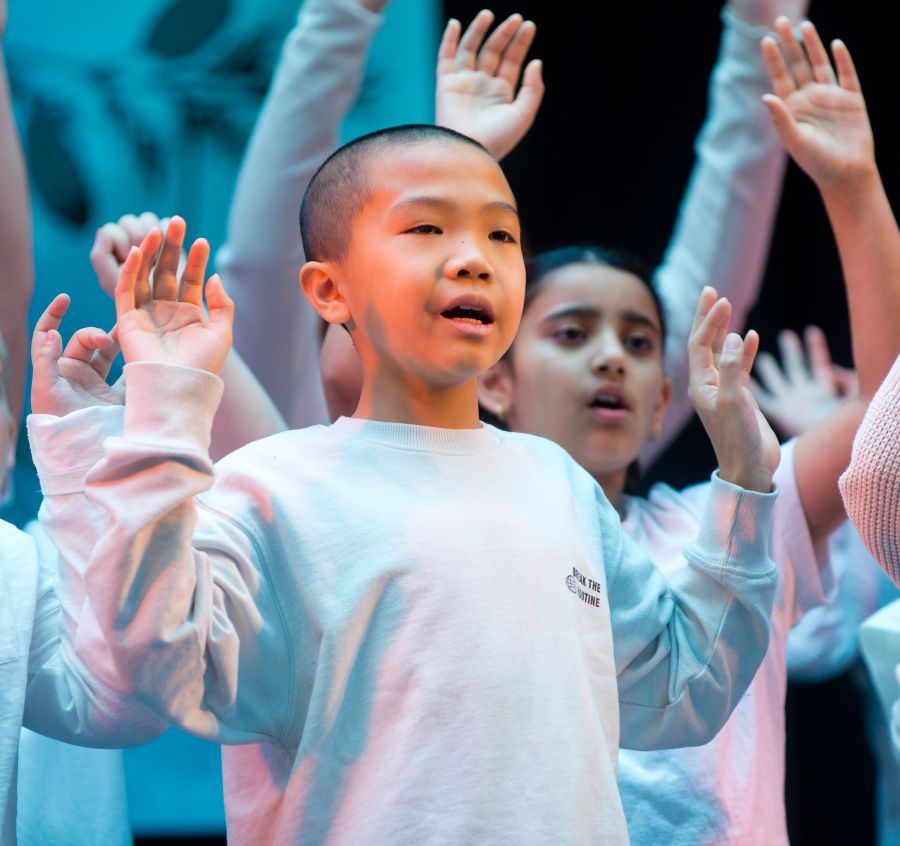 And he was there again Saturday morning as the 2022 edition of the telethon -- the first to be held publically since pre-pandemic 2019 -- unfolded at Cherry Lane Mall. 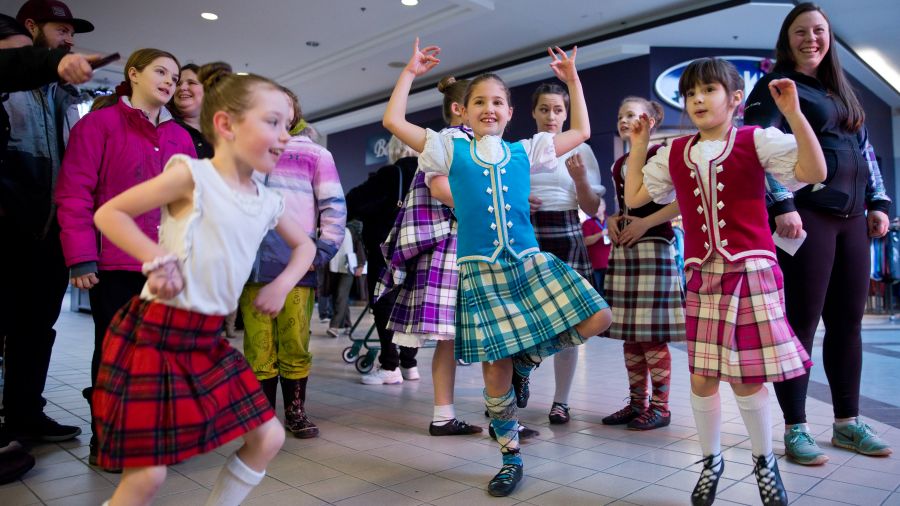 He did what he does best -- proudly presenting impressive cheques to worthy organizations.

Saturday at just about noon, Campbell hit the stage with repeat event host Chad Mielke and presented him a cheque for ten thousand dollars. 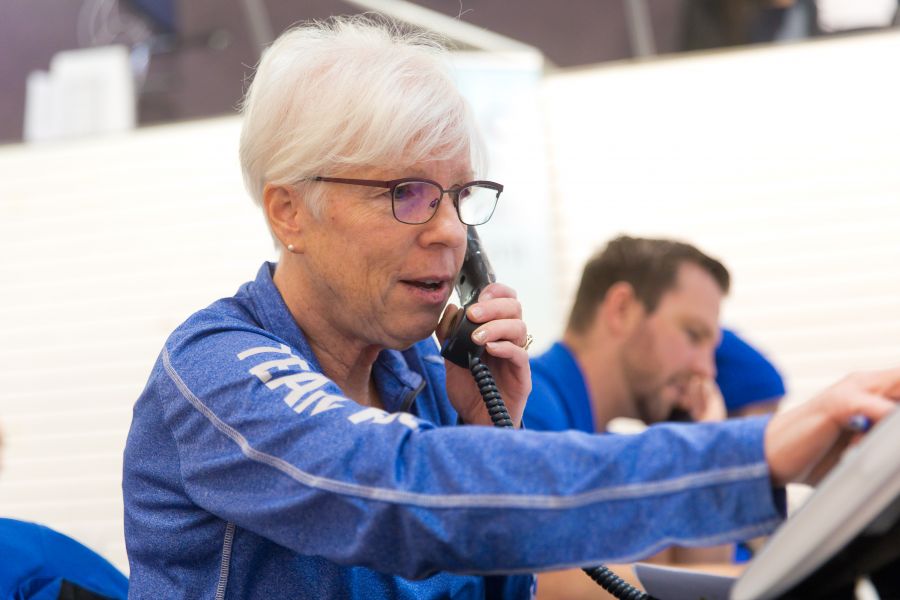 It was one more stunning contribution for Campbell's valiant organization, which to date has donated a whopping $165,000 to the OSNS cause.

"Our first donation was in 1995 for $500," smiled Campbell later. "But this has become one of our favourite projects. It's health-related and it’s about kids. To us, kids are our future." 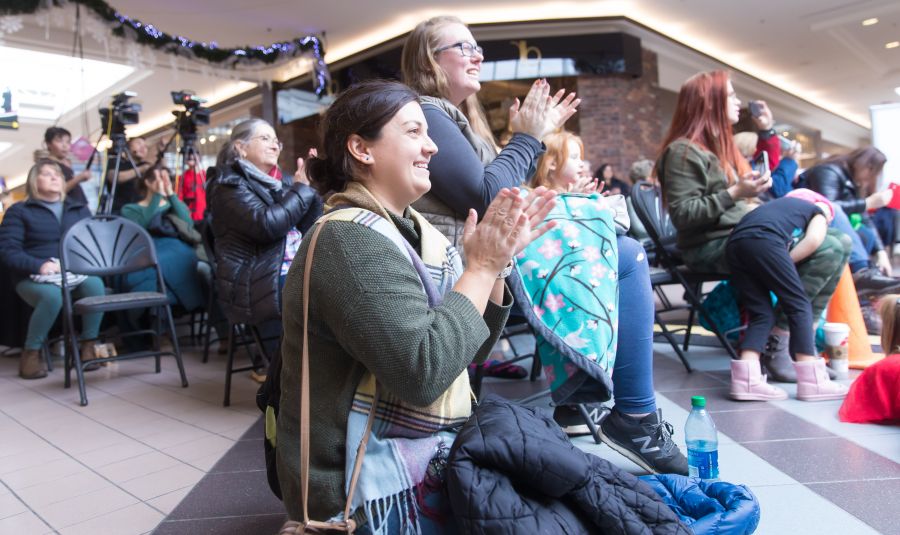 A lot of people in Penticton and area echo the thoughts of the Summerland Auxiliary -- that OSNS is one of the most important causes in the region. And that's a big reason its telethon attracts so many high-dollar donations.

And middle- and low-dollar too. Put it all together and it’s obvious why the organization once again surpassed its goal. As of Sunday afternoon, the Telethon total was $103,00 and counting. 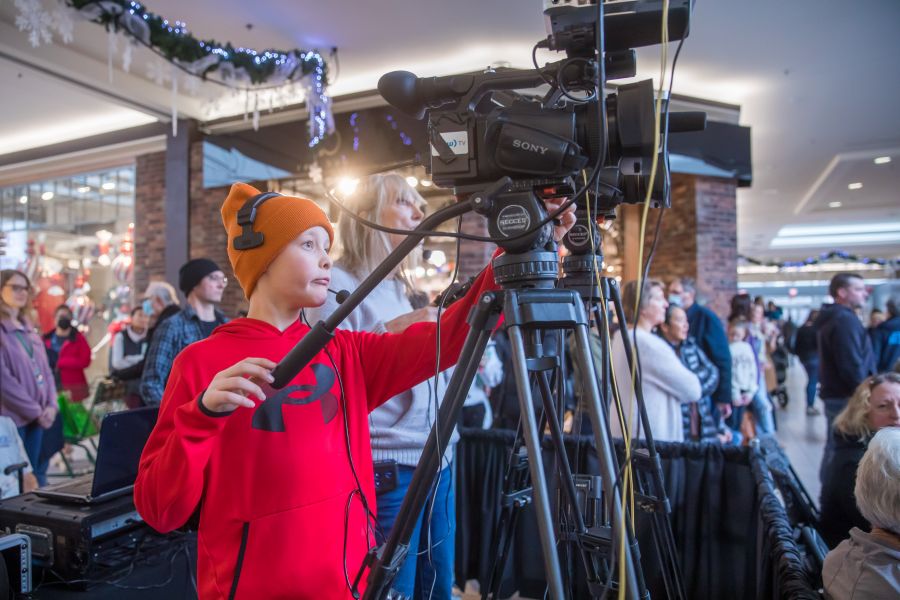 But it wasn't all about money. When OSNS brought its signature winter event to Cherry Lane in 2018, it wanted to increase public exposure and add a "live" element to a happening normally reserved for local TV viewers.

And it did just that. For two years anyway. And then COVID shut it down. 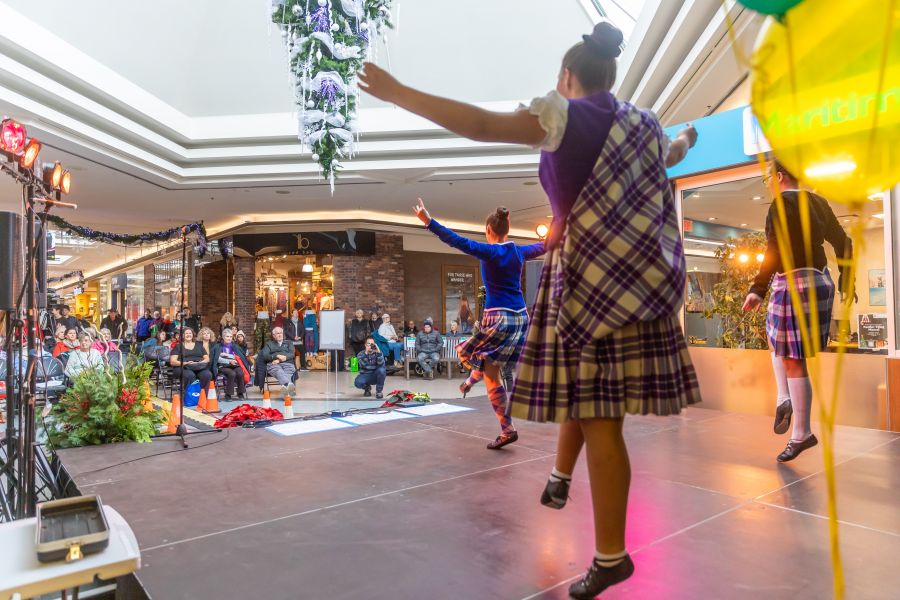 So the return Saturday to the big space just outside Save-On-Foods was good for everyone, including entertainers like Beamer Wigley. 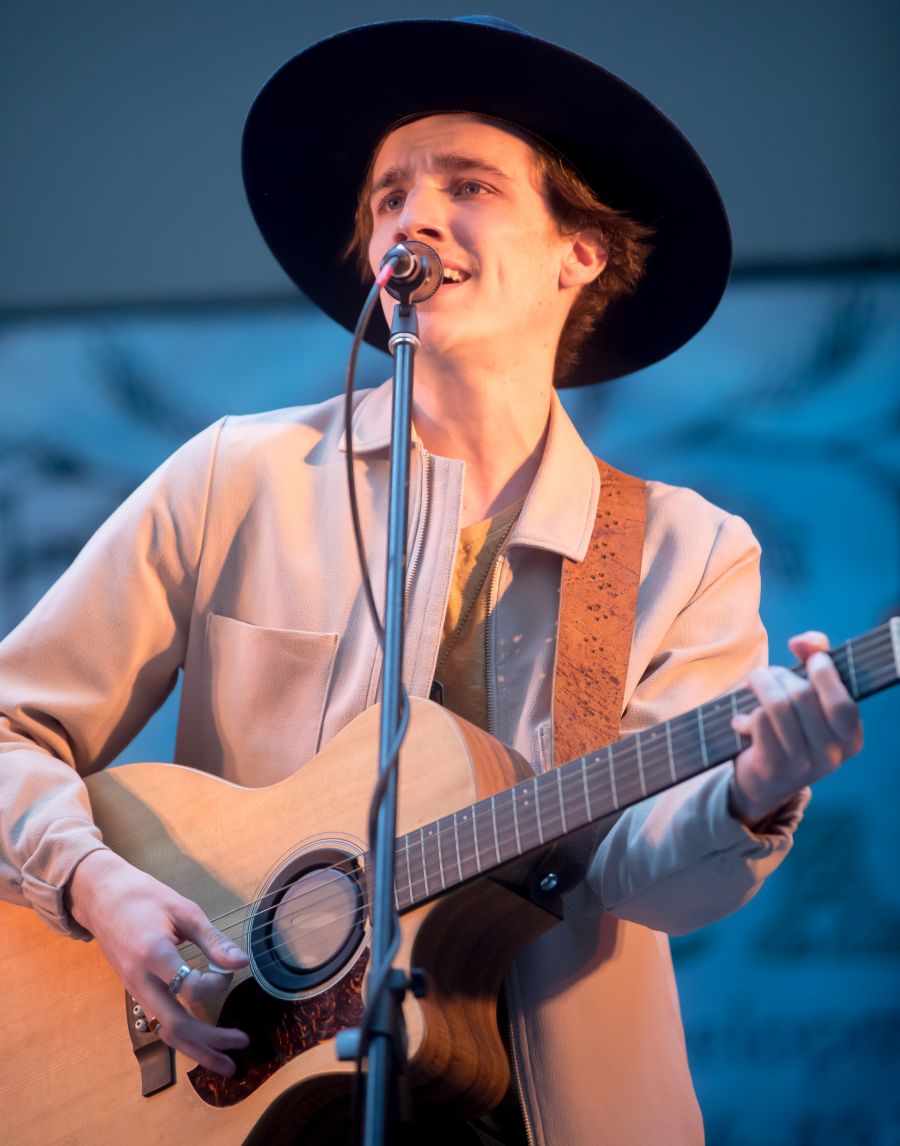 The young Penticton singer-songwriter-guitarist, a longtime supporter of OSNS, was on stage in the early afternoon, working the crowd like a seasoned veteran and showing off a voice and presence that should take him places. 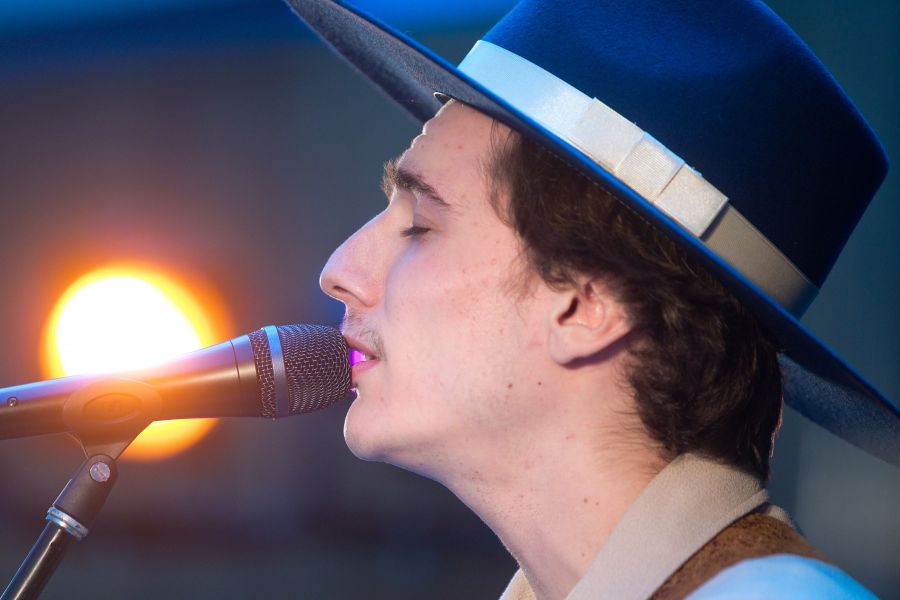 Also there, in full force, was the talented crew -- 50-plus kids, split into various teams -- from Okanagan Dance Studios, who took over the stage midway through the event and didn’t let it go until it had rocked the crowd to the ground. 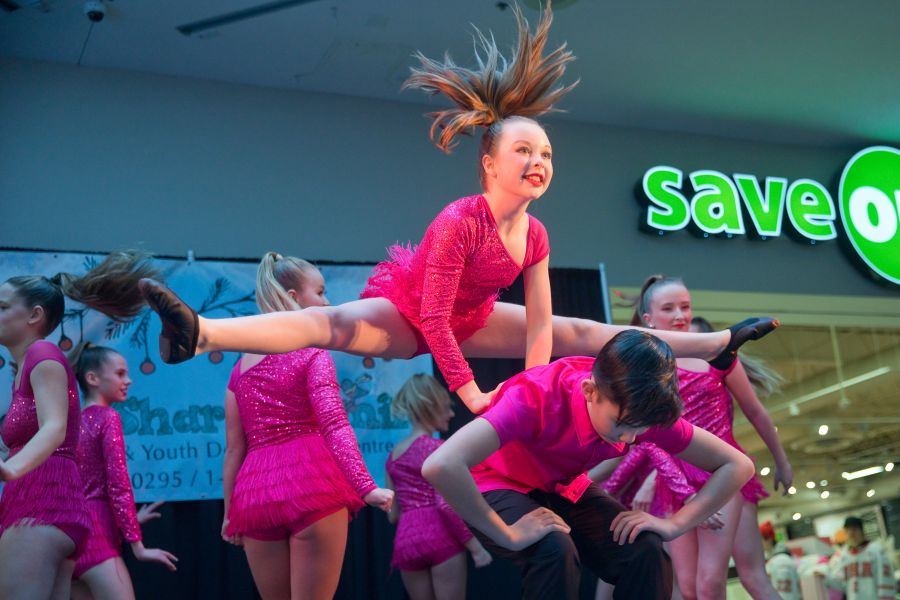 "It’s such an amazing cause," said instructor Shannon Cote when asked why ODS did the show. "And it's also really important for our kids to be involved in the community, to give back to the community and to share their love of dance with a live audience.

"During COVID we did videos, but seeing them up there, you could just feel their energy. In the end we get a lot out of it too. The experience is so fulfilling." 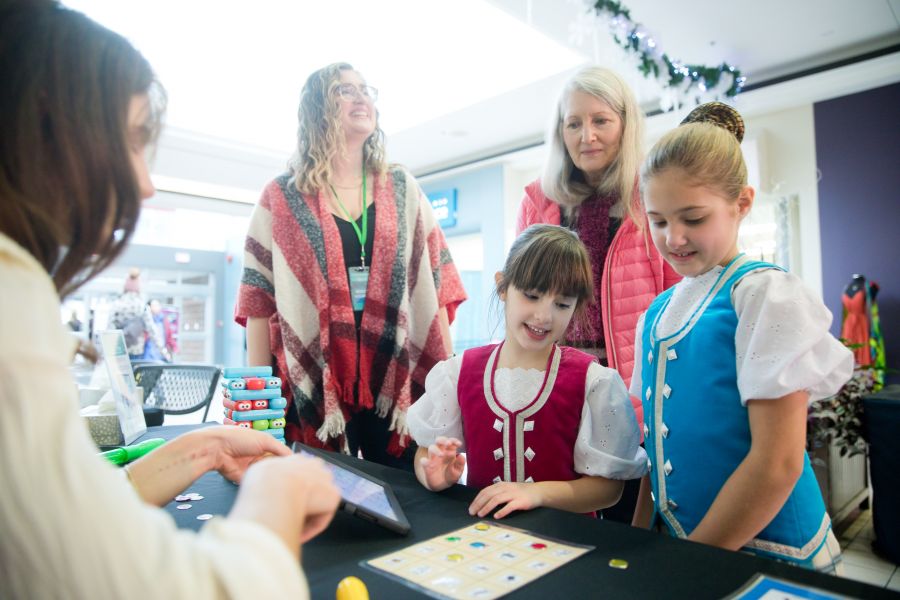 While the dancers danced and singers sang and other entertainers entertained, OSNS volunteer Scott Kehler and board member Marcus Toneatto watched over a jar of colourful jelly beans.

Why? In the hopes they'd get passers-by to stop, guess the number of beans, and donate a few bucks. Every guess and donation would win an entry to a $100 Save-On-Foods gift certificate. 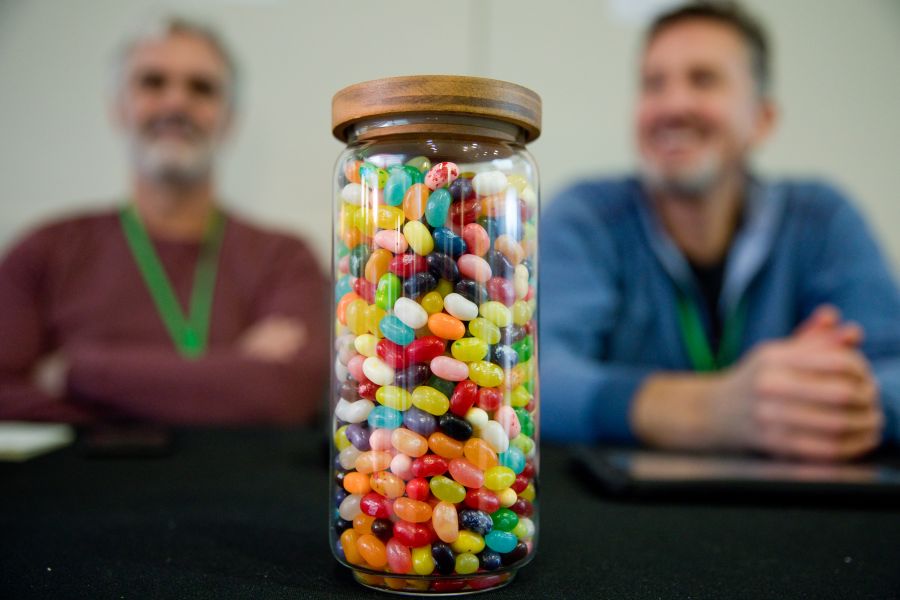 "This is the biggest fundraiser of the year," said Toneatto. "OSNS does amazing work for the children and the community, but it can't operate without the community's support. It really helps keep OSNS going."

Kehler added that the donations don’t have to end when the telethon does. 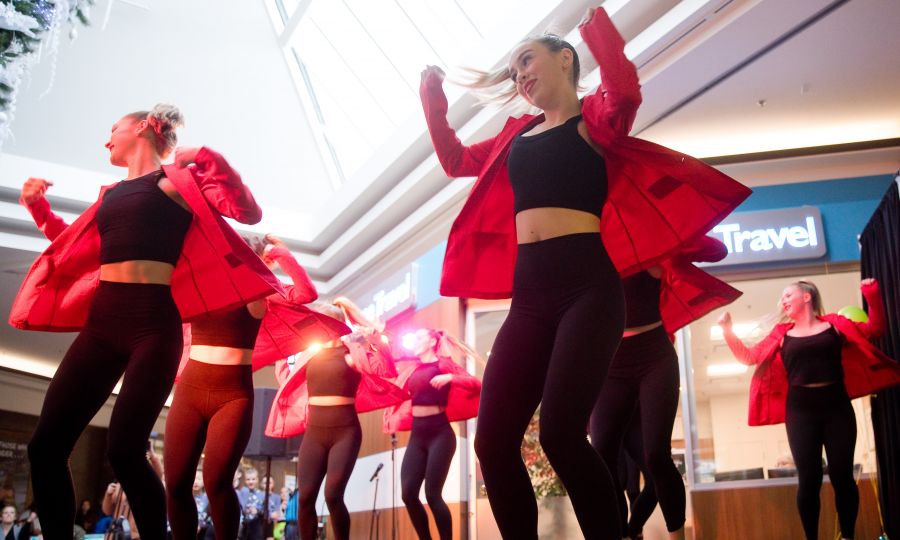 "People can contribute anytime," he said. "They can go to OSNS online whenever they have a moment."

Not far from the jelly beans was a big group of young kids wearing Okanagan Hockey Academy jerseys. As part of the event, they were raising money helping shoppers with their groceries. 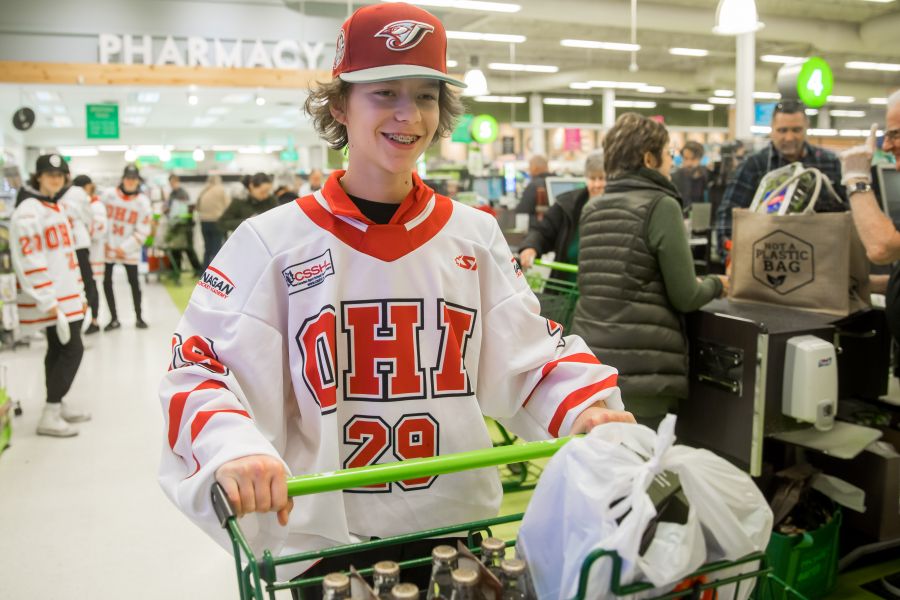 "Most of these guys are in their first year in the program," said OHA U15 head coach Jeff Urekar, "so it's good for them to get out in the community, to see what it is to be an OHA player.

"They need to know Junior players don’t just go to the rink and play. They have to be active members of the community too. So instilling those values at a young age is important." 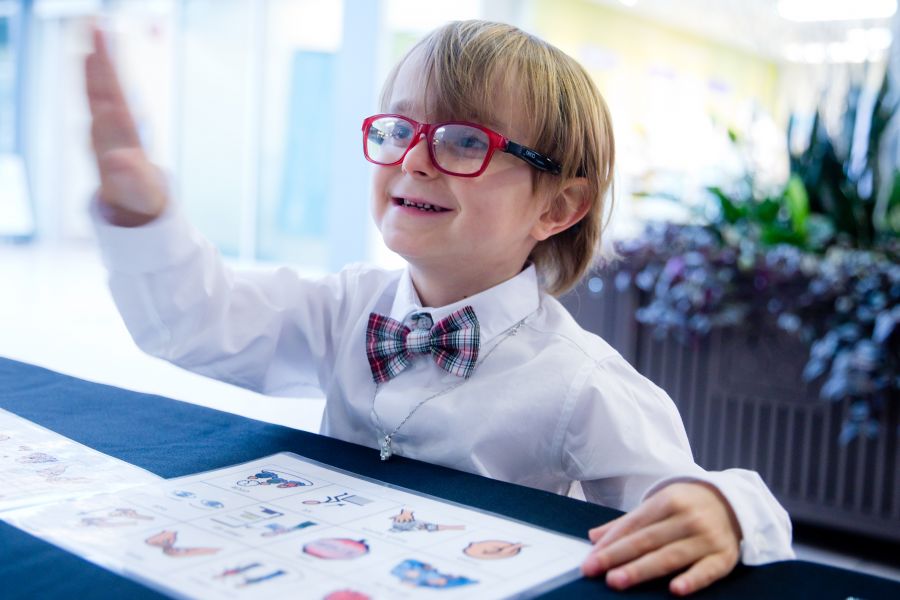 Later, a half-dozen Penticton firefighters showed up, all looking quite spiffy in their formal uniforms. Not only would they take a shift on the phones, they also brought a big cheque.

"This was a big year for us," explained first-year PFD member Evan Guthrie, who also handles duties as the secretary of the Penticton Firefighters Charitable Society. 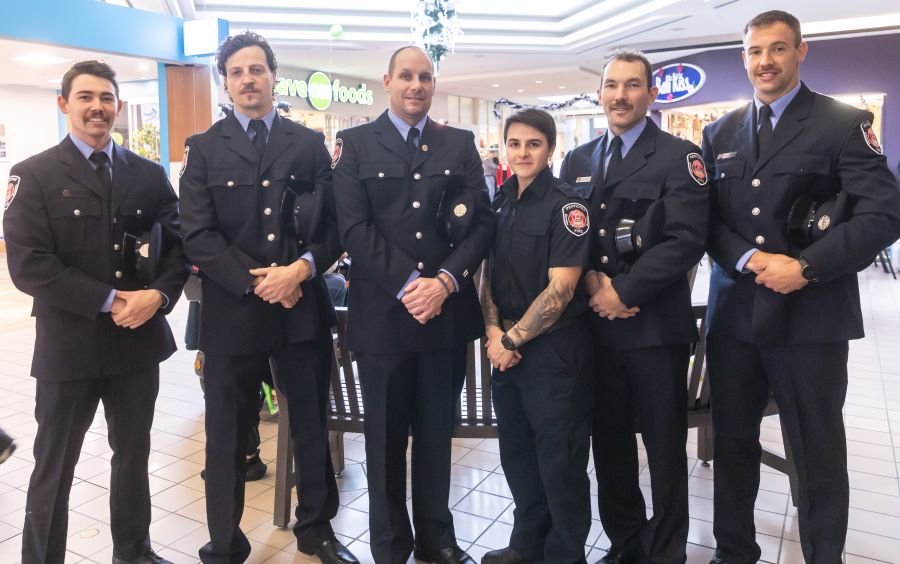 "We wanted to make our society more official, so we now have a board. And we started a big yearly event we're going to keep running -- a Penticton firefighters dodgeball tournament."

According to Guthrie, dodgeball was both literally and figuratively a smash hit and the entire year was a very good one indeed for PFD fundraising. 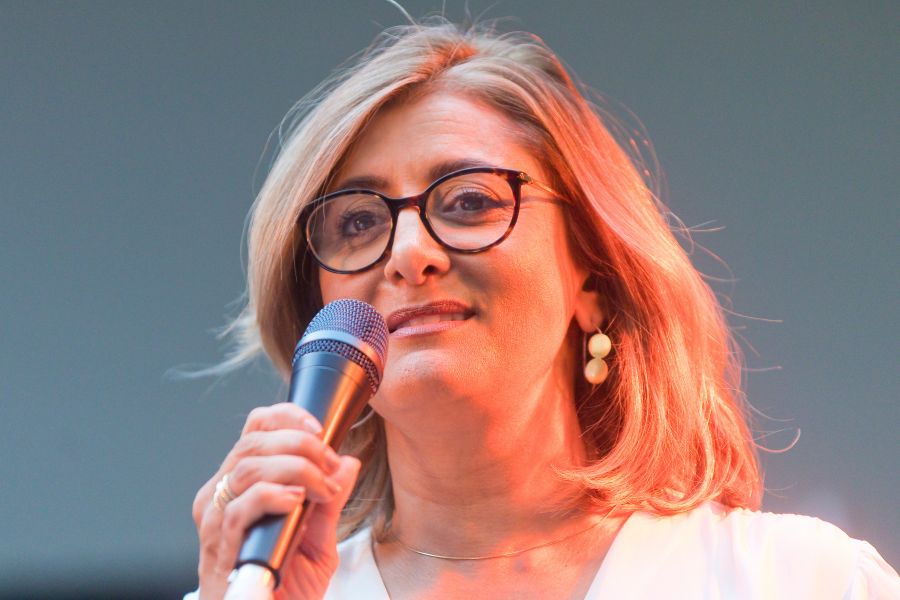 "We raised a lot of money," he said. "In fact we were able to raise substantially more than any other year, and OSNS is one of the biggest donations we're giving this year at $4,000."

As has become typical, PentictonNow had a great time at the OSNS telethon. Great entertainment, great community spirit, and big bucks headed to a great cause. We look forward to doing it next year. 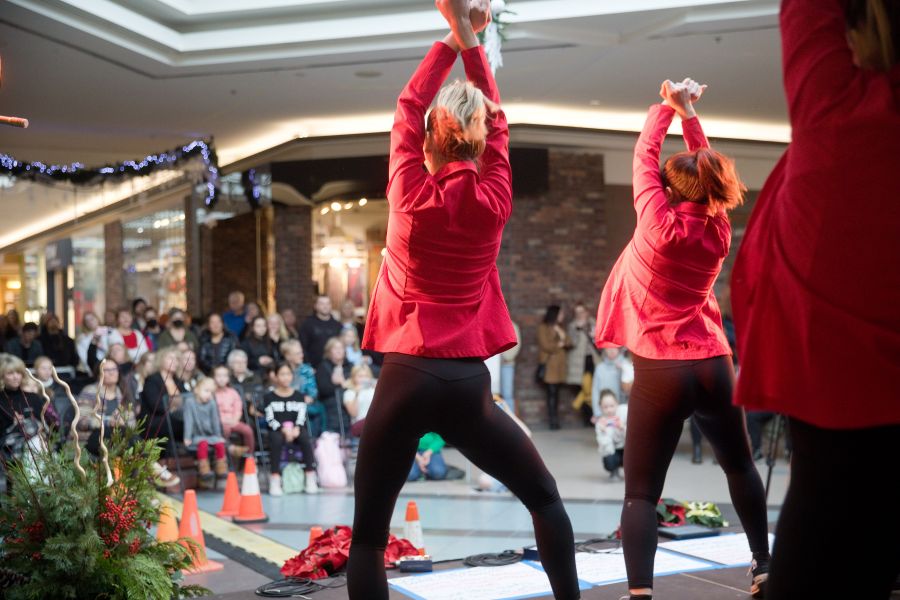 To learn more about OSNS and its work with local youth, and/or to donate, head to the website here. 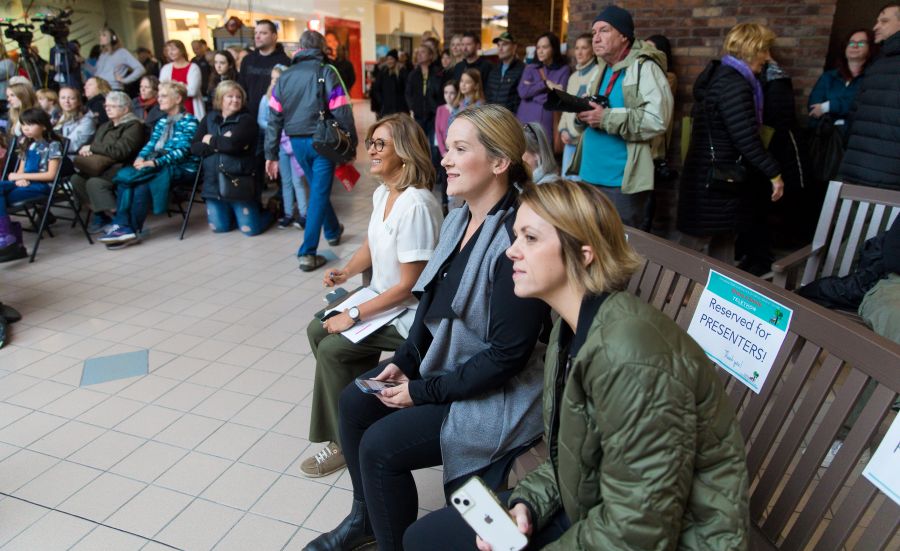 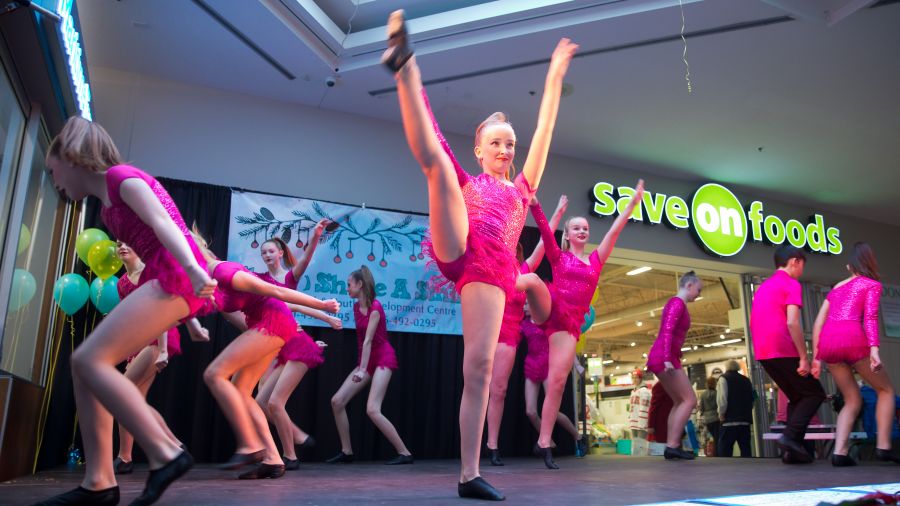