The next phase of construction for the Lake-to-Lake Bike Route is set to begin this month.

Residents can expect periodic road closures or delays over the next few months as crews work to finish by October.

Some of the work that has been completed on Atkinson Street, between Duncan and Industrial Avenues, includes installation of a storm water system, water main replacement and paving.

From July to August, work on this section will include installing lighting, working on pedestrian crossings, construction of curbs, finishing sidewalks and adding signage and road lines.

On July 18, the Atkinson Street Bridge will be closed for about six week. The city says this will allow work to continue during the fish window.

Work on Atkinson Street between Warren and Industrial Avenues will also start in July and will include:

Residents can expect single-lan alternating traffic on this part of Atkinson Street. On-street parking will longer be allowed here either.

Later this month, crews will begin on the section between Warren and Kinney Avenues.

There will be some repaving and concrete work. Other works will be much the same as other sections.

Finally, in September, crews will begin work on Duncan Avenue between Fairview Road and Main Street.

Click here for updates about the construction or here for road closure information. 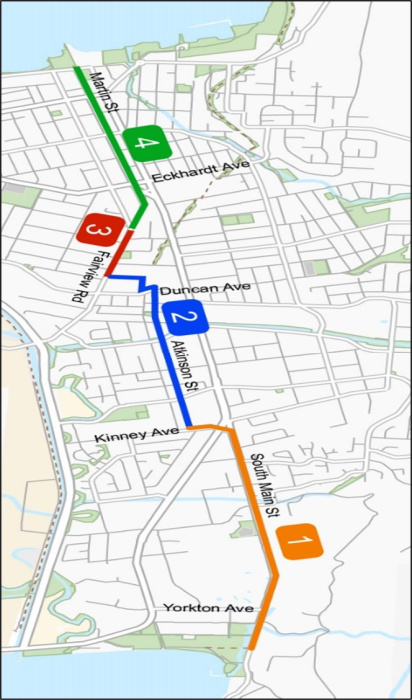