Alberta Premier Jason Kenney is calling for the federal government to impose economic sanctions against the United States in response to newly inaugurated US President Joe Biden’s “gut punch” decision to tear up the permit for the Keystone XL oil pipeline expansion.

“As friends and allies of the United States, we are deeply disturbed that one of President Biden’s first actions in office has been to rescind the presidential permit for the Keystone XL pipeline border crossing. This is a gut punch for the Canadian and Alberta economies,” Kenney said at a news conference late Wednesday.

“Sadly, it is an insult directed at the United States’ most important ally and trading partner on Day 1 of a new administration.”

Kenney said he was upset the US wouldn’t consult with Canada first before acting but saved his strongest criticisms for federal Liberals, whose statements in response to Biden’s actions Kenny characterized as too accepting.

“If the US government refuses to open the door to a constructive and respectful dialogue about these issues, then it is clear that the government of Canada must impose meaningful trade and economic sanctions in response to defend our country’s economic interests,” he said. 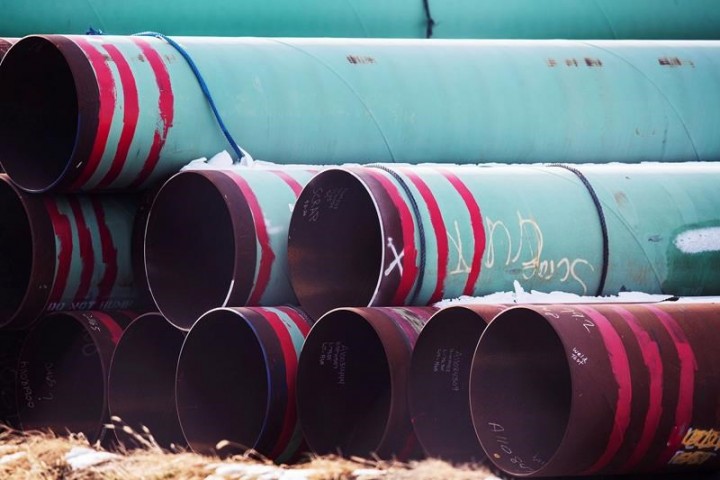 The lack of a strong response sets a precedent that could allow other members of Biden’s government to call for other “retroactive” permit revocations for existing pipelines, Kenney said. Part of Keystone XL has been built but it is not complete, nor is it operating.

“While we welcome the president’s commitment to fight climate change, we are disappointed but acknowledge the president’s decision to fulfil his election campaign promise on Keystone XL,” he said in a brief statement that outlined previous efforts to make a case for the project to the incoming administration.

Biden’s first phone call with a foreign leader will be with Trudeau, White House press secretary Jen Psaki said Wednesday, noting that she expected the Keystone decision would be among matters under discussion.

The Calgary-based company also warned the move would lead to the layoffs of thousands of union workers and comes despite the company’s commitments to use renewable energy to power the pipeline and forge equity partnerships with Indigenous communities.

The Biden decision was condemned by the Canadian Association of Petroleum Producers.

“This action is killing thousands of Canadian and American jobs at a time when both economies badly need private investment,” said CEO Tim McMillan in a statement.

“Killing the Keystone XL pipeline once and for all is a clear indication that climate action is a priority for the White House,” said Dale Marshall, national climate program manager for Canada’s Environmental Defence.

“We should take heed when the biggest customer for Canada’s oil kills a pipeline that is already under construction. The Keystone XL pipeline never made sense for either the US or Canada.”

“We need to get as many people back to work, in every part of Canada, in every sector, as quickly as possible. The loss of this important project only makes that harder,” O’Toole said.

The Business Council of Canada and the Progressive Contractors Association of Canada said in news releases they are disappointed.

The association, whose member companies employ thousands of Alberta and BC construction workers, said the pipeline would have generated as many as 60,000 direct and indirect jobs in Canada and the United States.

“Canadian oil will be an important source of North American energy for decades to come, and will play a critical role as Canada and the United States work together to transition to a low-carbon economy,” said Goldy Hyder, CEO of the Business Council of Canada.

TC Energy approved spending US$8 billion in the spring of 2020 to complete Keystone XL after the Alberta government agreed to invest about US$1.1 billion (C$1.5 billion) as equity and guarantee a US$4.2-billion project loan.

Kenney has said the province has about $1 billion at risk if the project is killed.

The 1,947-kilometre pipeline is designed to carry 830,000 barrels a day of crude oil from Hardisty, Alta., to Steele City, Neb. From there it would connect with the company’s existing facilities to reach the US Gulf Coast — one of the world’s biggest oil refining hubs.

TC Energy announced a plan Sunday for the Keystone XL project to achieve net-zero emissions by spurring an investment of over US$1.7 billion in communities along the Keystone XL footprint to create about 1.6 gigawatts of renewable electric capacity.

The Calgary-based company has also struck a deal with four labour unions to build the pipeline and has an agreement in place with five Indigenous tribes to take an ownership stake.

Some 200 kilometres of pipe have already been installed for the expansion, including across the Canada-US border, and construction has begun on pump stations in Alberta and several US states.

TC Energy said it will stop capitalizing costs, including interest during construction, effective Wednesday, and will evaluate the carrying value of its investment in the pipeline, net of project recoveries.

It says this will likely result in “substantive” mostly non-cash writedowns in its first-quarter financial results.

The company remains committed to growing earnings and dividends through its investments in critical energy infrastructure even without Keystone XL, said Francois Poirier, who took over as TC Energy CEO at the beginning of the year.

“Our base business continues to perform very well and, aside from Keystone XL, we are advancing $25 billion of secured capital projects along with a robust portfolio of other similarly high-quality opportunities under development,” Poirier said in a statement.

Biden was vice-president in 2015 when Barack Obama rejected Keystone XL for fear it would worsen climate change.

‘I was yelling and swearing’: Pure shock for BC woman after $637K lotto win

Here’s everything coming to Netflix Canada in March 2021

1 man shot dead by police, another in custody after possible hostage situation in BC

From lockdowns to spring break, provinces split on next steps in COVID-19 fight

BC reports 1,478 new COVID cases over the weekend, confirms all eligible residents will receive vaccination before August

White House clear on whether US will share vaccines with Canada: ‘No’