British Columbians can expect a slower start to spring and above-average precipitation this year, according to a major national forecaster.

The Weather Network's predictions for spring 2021 include an "outstanding" close to the skiing season in BC.

That's because spring will be slightly delayed across the province.

"However, this could also bring a heightened risk for spring flooding when warm weather finally does arrive," the Weather Network warned.

The forecaster added: "At this point, it does not look like we will see an early start to the wildfire season. While it is too early to discuss the summer wildfire season, a cooler and wet spring should at least delay the start of the fire season." 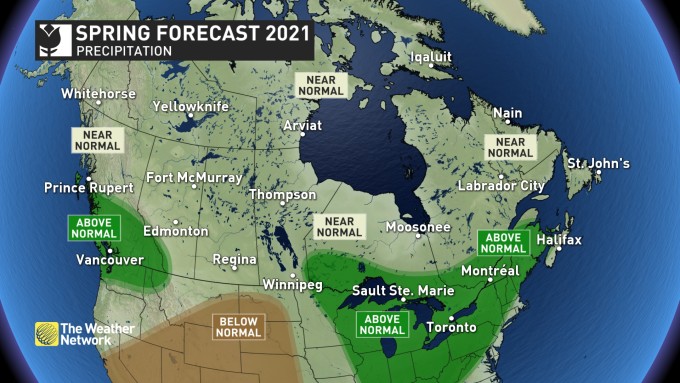 Canadians across the country, though, can look forward to a mild spring peppered with the odd winter flashback throughout the first part of the season.

Chris Scott, chief meteorologist at the Weather Network, said Canadians can count on some sunny days to put a bounce in their step after a long winter.

“There’s going to be some challenges. We’re not out of the woods for winter, but we’ve certainly put the worst behind us and there’s some really nice days ahead,” said Scott, adding that people should get out and enjoy the sunshine when the daily forecast calls for it.

The Weather Network predicts that March will bring extended tastes of early spring to Ontario and Quebec after a particularly wintry February. But Scott said the province should brace for a period of colder weather in mid-spring before more consistent warmth sets in.

Its outlook suggests March will be dramatically warmer through the Prairies, but indicates western parts of the region will struggle to reach consistently mild temperatures. 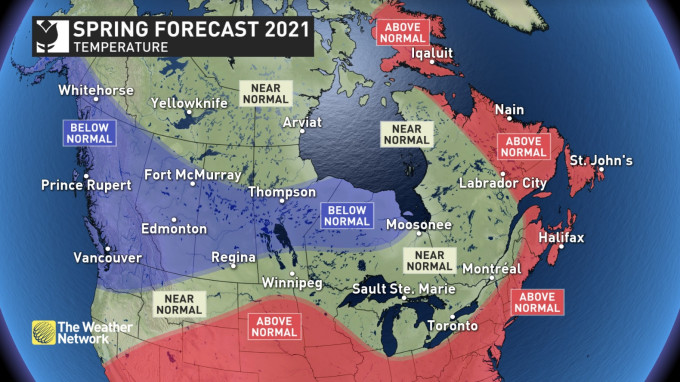 The network said it’s concerned that drought conditions south of the border could become more widespread and affect southern parts of the region by the start of the growing season.

In Northern Canada, colder than normal spring temperatures are expected for southern Yukon, while eastern Nunavut will be warmer than usual.

“There’s going to be good days (for outdoor activities) in every part of the country, you’re just going to have to pick your battles,” Scott said.

The meteorologist did have good news for most of Canada’s largest river valleys, predicting they would be spared disastrous floods in the months ahead.

Scott said the Red River Valley in Manitoba, the Ottawa and St. Lawrence valleys in Ontario and Quebec, as well as the Saint John River valley in New Brunswick likely won’t have to contend with dangerously high water levels in March and April.

“That’s because we don’t have the tremendous snowpacks that are the antecedent condition that you need to get really severe spring flooding,” said Scott.

“That’s really good news in places, especially in Eastern Canada, that have been hit with floods.”

– With files from Canadian Press