The BC Wildfire Service is expecting fire behaviour to increase in the coming days as temperatures rise.

Planned ignitions and aviation support will be ongoing for this fire.

BC Wildfire Service says air resources may be picking up lakes in the area and requests that people stay clear of these operations.

There are currently 84 firefighters, 16 helicopters and 44 pieces of heavy equipment working this fire.

Crews are being supported by 10 structure protection personnel. 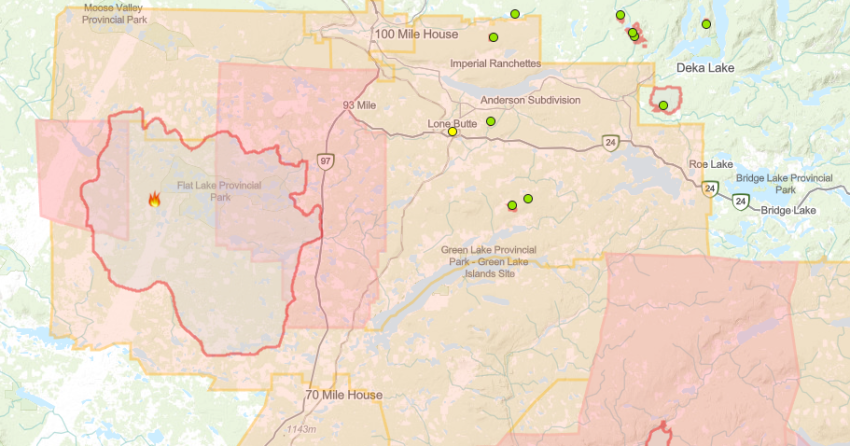 The Cariboo Regional District evacuation order and alerts remain in place with the exception of Flat Lake to Green Lake North.

The evacuation order in the vicinity of Flat Lake to Green Lake North has been replaced with an evacuation alert.

DriveBC reports that Highway 97 remains open and travellers are asked to reduce speed and watch for crews working in the area.

(UPDATE: July 27 @ 11:40 am) - The Flat Lake wildfire is quickly catching up to the Sparks Lake wildfire when it comes to the biggest fire in British Columbia conversation.

New data shows that the fire is now 39,584 hectares in size and it remains out of control.

According to the BC Wildfire Service, planned ignitions continue to be executed at the Flat Lake wildfire when the conditions allow it.

"The objective of the planned ignition is to remove unburned fuels between the fire perimeter and pre-determined control lines such as roads and machine guards," explained the BCWS.

"This tactic will bring the fire's edge to more easily accessible locations where ground crews can safely deliver water directly to the fire's edge."

The agency called planned ignitions an "essential and effective" tactic that is used to help contain very large fires.

Fire behaviour is expected to continue increasing over the coming days thanks to the high temperatures and windy conditions.

A number of evacuation orders and alerts remain in place from the Thompson-Nicola Regional District for rural properties, while the entire District of 100 Mile House remains under an evacuation alert.

There are currently 78 firefighters, 44 pieces of heavy equipment and 15 helicopters assigned to the fire, along with 10 structure protection personnel.

According to the BCWS, the fire is still out of control at 32,194 hectares. Hwy 97 in the area has since reopened, though the evacuation order is still in effect.

"Yesterday a portion of the planned ignition operation was completed. Heavy equipment and crews also made progress on establishing and securing control lines."

"There was moderate fire behavior yesterday with some growth in the south and minimal growth in the north. The fire continues to be monitored by crews overnight."

A total of 92 firefighters, 15 helicopters, 51 pieces of heavy equipment and 23 structure protection units are on scene.

NowMedia will update the story when more information is available.

The BC Wildfire Service now estimates the fire, located southwest of 100 Mile House, to be 32,194 hectares in size.

"There was moderate fire behaviour with some growth in the south and southwest," the BCWS said.

"With the expected weather forecast for the next few days, crews can safely conduct direct attack operations."

Heavy equipment will be working to gain access and establish indirect control lines on the east flank of the fire today.

There's also plans for ignitions in a small area north of Davis Lake if conditions permit.

"Crews will be working north of stormy road to remove available fuels between the fire and the guard.," added the BCWS.

"On the north end, crews will be working to connect existing road systems in the vicinity of Gustafsen and Neilson lakes."

There are 89 firefighters, 53 pieces of heavy equipment and 15 helicopters currently assigned to the lightning-caused fire.

With properties threatened by the fire, 22 structure protection personnel are on scene as well.

On Thursday, the BCWS dispelled rumours that 100 Mile House had been put on an evacuation order and the District remains under evacuation alert at this time.

(UPDATE: July 22 @ 2:20 pm) - The Flat Lake wildfire remains at an estimated 26,191 hectares today, but it doesn't reflect growth in the area from Tuesday onwards.

Although the mapping of the fire has not changed since Wednesday, the BC Wildfire Service did provide an update today to dispel recent rumours that 100 Mile House had been moved from an evacuation order.

Simply put, that rumour is not true.

"At this time, the BCWS has NOT made recommendations for the evacuation alert for 100 Mile House to be upgraded to an evacuation order," the agency said.

The status of Hwy 97 continues to evolve, but the latest update is that the highway is currently open south of 100 Mile House.

Today, heavy equipment has been working to gain access and establish indirect control lines on the east flank of the fire.

Crews in the southeast section of the fire are building an additional guard below Stormy Road, while work is also being done in the north to connect existing road systems near Gustafsen Lake and Neilson Lake.

There has been a bit of precipitation in the area and the BCWS is working to determine exactly how much rain the fire received.

"It is thought that it received more than 5 millimetres, which provides crews a day or two to take advantage of the expected lower fire behaviour to build guard and conduct other operations," explained the BCWS.

There are 81 firefighters, 53 pieces of heavy equipment and 15 helicopters actioning this fire, while 22 structure protection personnel are assigned to it as well.

It's now estimated at 26,191 hectares in size, a growth of more than 10,000 hectares from Tuesday's estimate, although the BC Wildfire Service attributes some of that to more accurate mapping.

There are 62 firefighters, 53 pieces of heavy equipment, 14 helicopters and 22 structure protection personnel currently assigned to the fire.

The BCWS says the fire has advanced to Hwy 97 at 83 Mile and Green Lake Road, which is where many of the structure protection personnel are focusing their attention.

(UPDATE: July 20 @ 9:10 am) - The BC Wildfire Service says "there was a small amount of growth" on the Flat Lake wildfire since Sunday.

The increased activity came on the southeast section of the fire, but fortunately there have still been no structures lost, the agency said.

On Monday, crews worked with heavy equipment to establish control lines down the east flank of the fire, south of Bullock Lake Road.

In the afternoon, conditions finally permitted crews to begin planned ignitions in the area south of Bishop Lake and Eighty Three Lake.

There are 59 firefighters, 17 structural protection personnel, 14 helicopters and 64 pieces of heavy equipment

The BC Wildfire Service estimates it to be 14,000 hectares in size as of Sunday night and it's still considered an out-of-control interface fire.

Planned ignitions were tentatively planned for Sunday afternoon, but they did not occur due to unfavourable conditions.

The BCWS currently has 35 firefighters, 12 helicopters and 64 pieces of heavy equipment assigned to this fire, as well as structural protection personnel.

It grew to 10,000 hectares on Thursday and the BC Wildfire Service said "aggressive fire behaviour" was observed in the evening.

Suppression efforts have been successful enough to slow the fire's movement towards Hwy 97 and as a result, the highway reopened on Thursday.

However, DriveBC warned that the highway could close again on short notice.

"Heavy equipment has been establishing machine guards and connecting to existing features, such as roads and lakes, which serve as natural fuel breaks," said BCWS.

"Helicopters will continue to support with bucketing activities today. Due to fire behaviour, it is difficult for ground crews to engage in direct suppression at this time."

The Cariboo Regional District has evacuation orders and alerts in place for rural properties around the fire, while the entire District of 100 Mile House is under an evacuation alert.

It had been closed for some time due to the Flat Lake wildfire, which is moving east towards the highway.

While it is now open, DriveBC warns that future closures of the highway due to the fire are possible and could happen at very short notice.

It quadrupled in size on Wednesday, growing from 2,000 hectares to 8,750 hectares, and the BC Wildfire Service said it continues to experience "aggressive fire activity."

"The head of the fire and the majority of fire growth is to the east, moving towards Hwy 97," explained the BCWS. "Given current and forecast weather conditions, additional growth is expected."

Air tankers and helicopters are actioning the fire from above today, while heavy equipment continues to establish guards that connect to existing features, like roads and lakes, that serve as natural fire breaks.

The Cariboo Regional District has evacuation orders and alerts in place for rural properties around the fire, while the entire District of 100 Mile House is under an evacuation alert.

Their relocation is necessary due to the fast-moving Flat Lake wildfire, which is estimated at 2,000 hectares and located southwest of 100 Mile House.

"The 100 Mile District General Hospital is not evacuated at this time, anyone requiring emergency care should proceed to this hospital as needed," explained an IH release.

Evacuation orders and alerts remain in place for rural areas around the fire, while the entire District of 100 Mile House is under an evacuation alert.

It’s now estimated at 2,000 hectares and the fire growth is primarily to the east, which means it’s moving towards Hwy 97 and 100 Mile House. 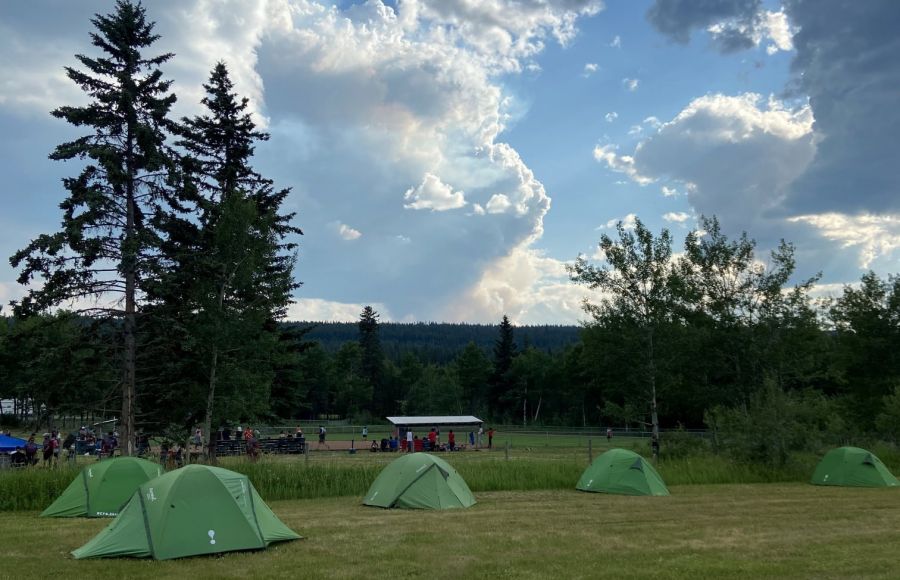 “Low humidity and strong winds have resulted in significant growth throughout the evening and into today,” explains the BC Wildfire Service website.

“Aggressive fire activity has been observed today and has resulted in tactical evacuations.”

While the Cariboo Regional District already had an evacuation order and alert for hundreds of rural properties, the District of 100 Mile House has now issued its own evacuation alert.

It affects every property within the district because of the potential danger to life and health.

“An evacuation alert has been issued to prepare you to evacuate your premises or property should it be required,” explained a release from the District’s mayor, Mitch Campsall.

“Residents will be given as much advance notice as possible prior to an evacuation; however, you may receive limited notice due to changing conditions.”

Hwy 97 is also closed 16 kilometres north of 70 Mile house due to the fire and DriveBC suggests Hwy 24 and Hwy 5 as an alternate route.

On Tuesday, there were around 20 BCWS personnel battling the blaze with air support, but that number will likely grow today.

The BCWS has yet to provide an updated personnel count.

“Air tankers and helicopters are supporting with a focus on structure protection,” the BCWS said. “Aggressive fire behaviour is preventing ground personnel from directly actioning the fire.”

According to the BCWS, this fire was sparked by lightning on Thursday, July 8.

NowMedia will continue to update this story as more information becomes available.