To paraphrase Snoopy, it was a dark and stormy morning. 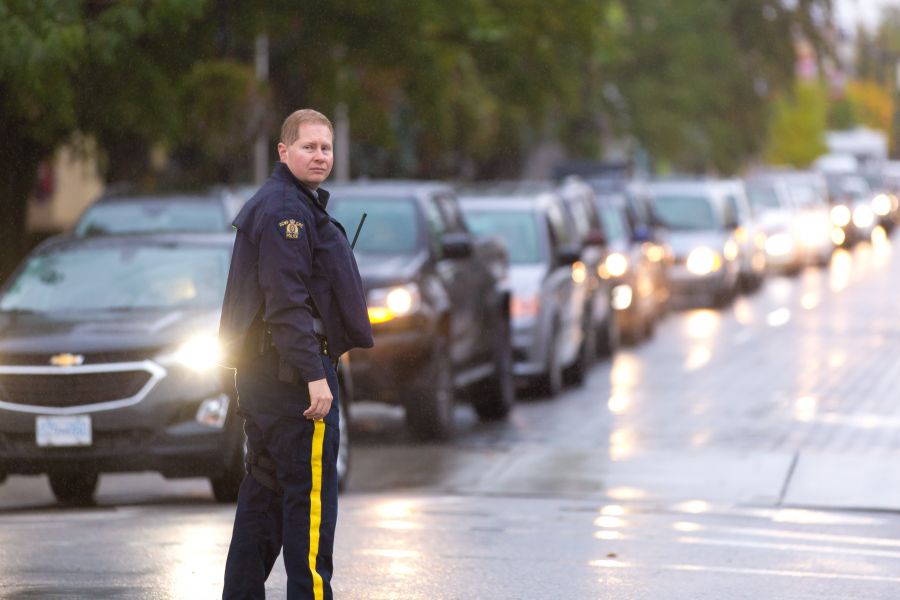 But down at the Lakeside Resort, all systems were go for the 2019 South Okanagan United Way Drive Thru Breakfast. The bags were packed, the troops were ready to roll out, and even the Penticton Vees (yep, the same team that just topped Canadian Junior Hockey League rankings) were out on the wet streets to attract passing motorists. 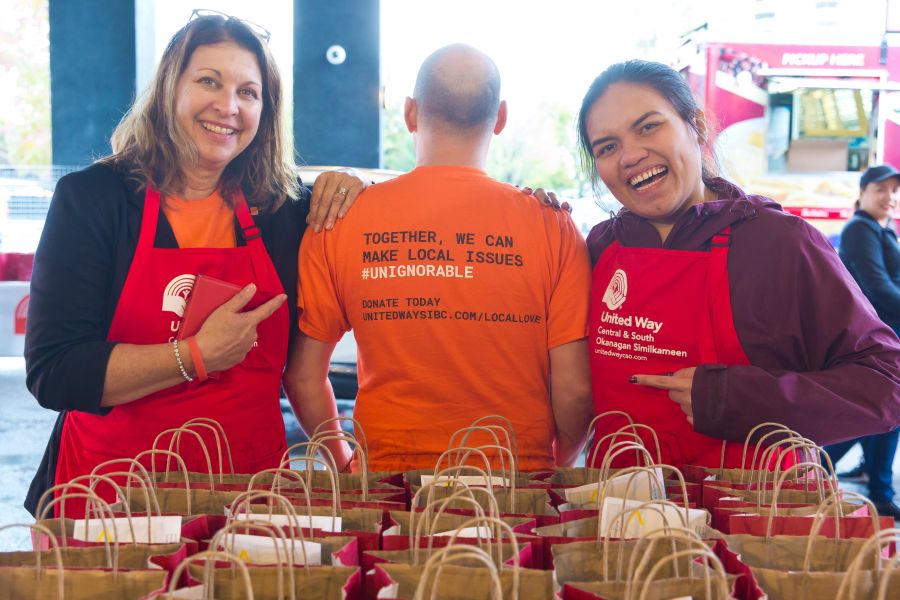 But would they come? 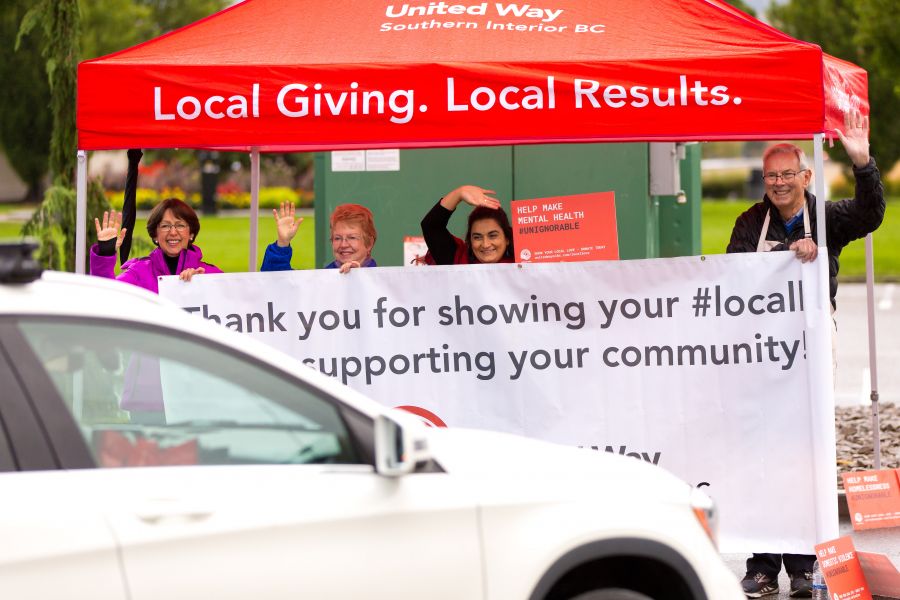 Of course they would. The Drive Thru Breakfast is a big deal in Penticton, and seemingly becoming a bigger deal every year. 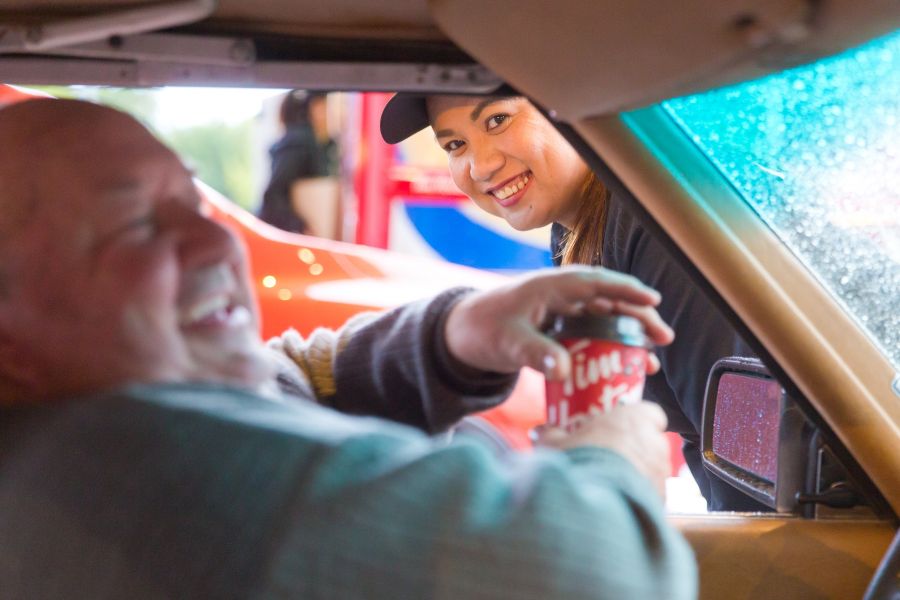 This year, organizers targeted a cool $25,000 If they hit it, it would be the most money ever raised in the event's eight-year run. 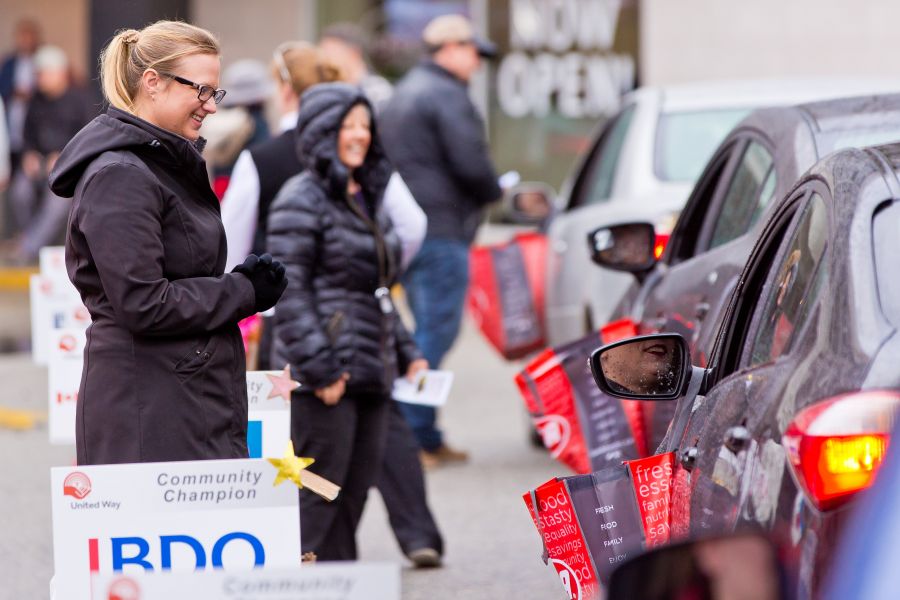 And that's just what they did. According to United Way Southern Interior BC manager of marketing and events Marianna Dahl, today's Drive Thru Breakfast ultimately raised $25,134. 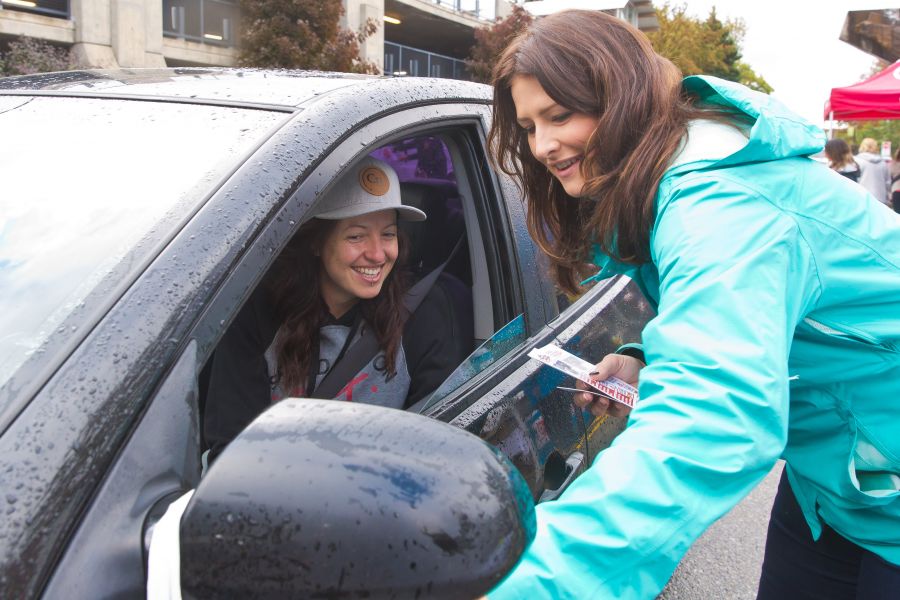 One of today's Breakfast guests was Lisa Plourde. She works at the Penticton Public Library, and this morning she brought along a dozen or so library cohorts, just like last year. 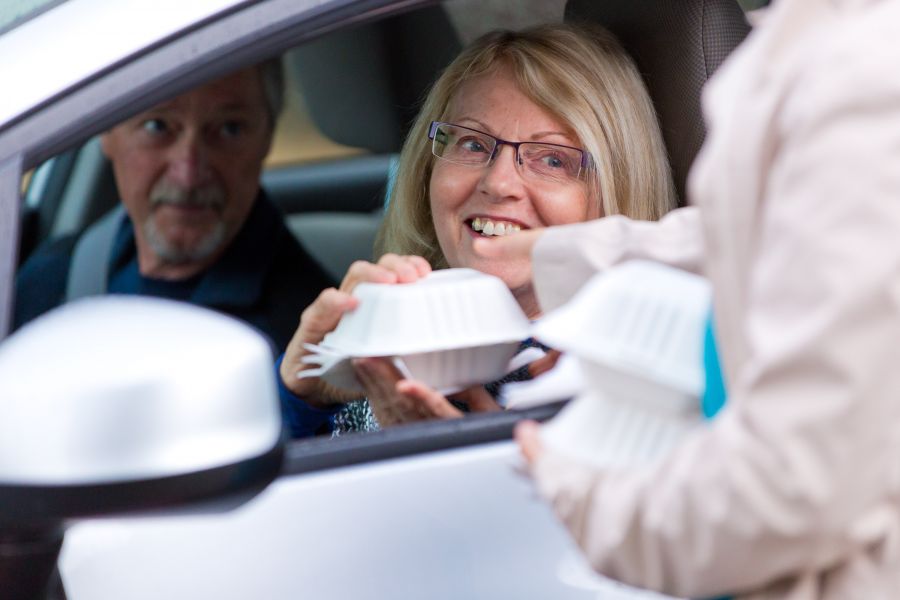 "It's near and dear to me because sometimes I don't get a chance to do anything for the community, " she said. "So this is my way of giving back. I got the whole library involved." 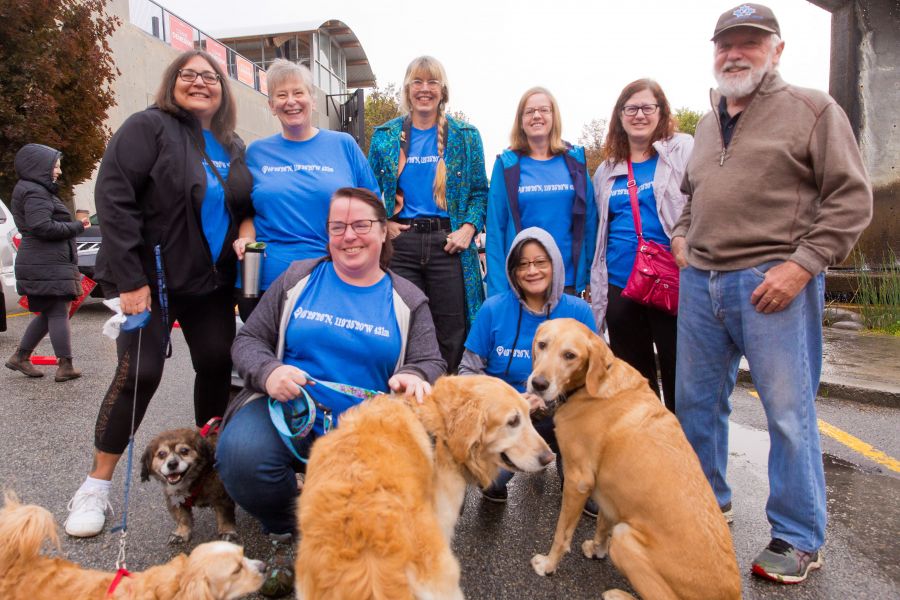 It should be noted that the library gang showed up without a car, again just like last year. 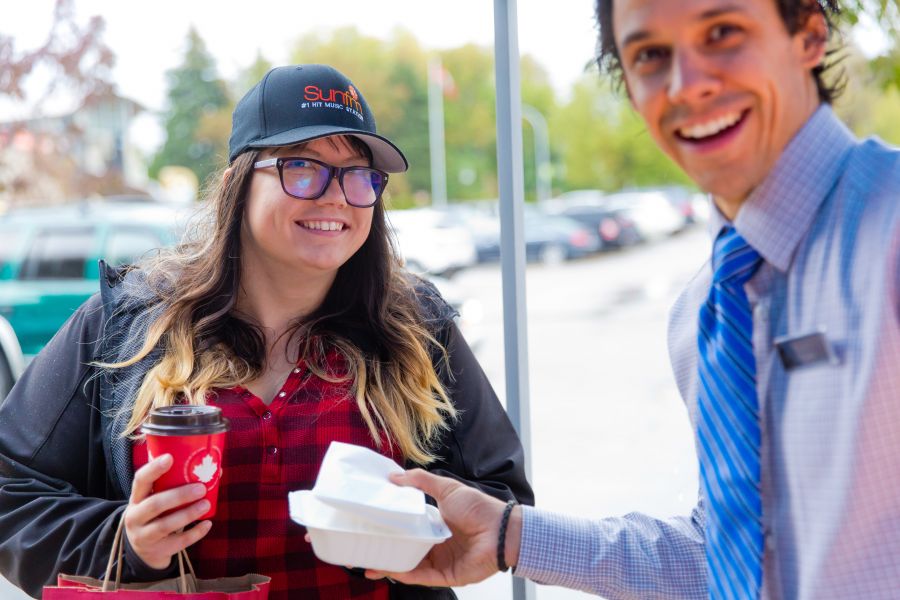 Another pedestrian was Doug Gaidica of Penticton. He works at City Hall, just a block or so away, and he says he's walked on in for several years in a row. "I want to contribute," he said, "and it’s a fun event. Everybody's in great spirits today." 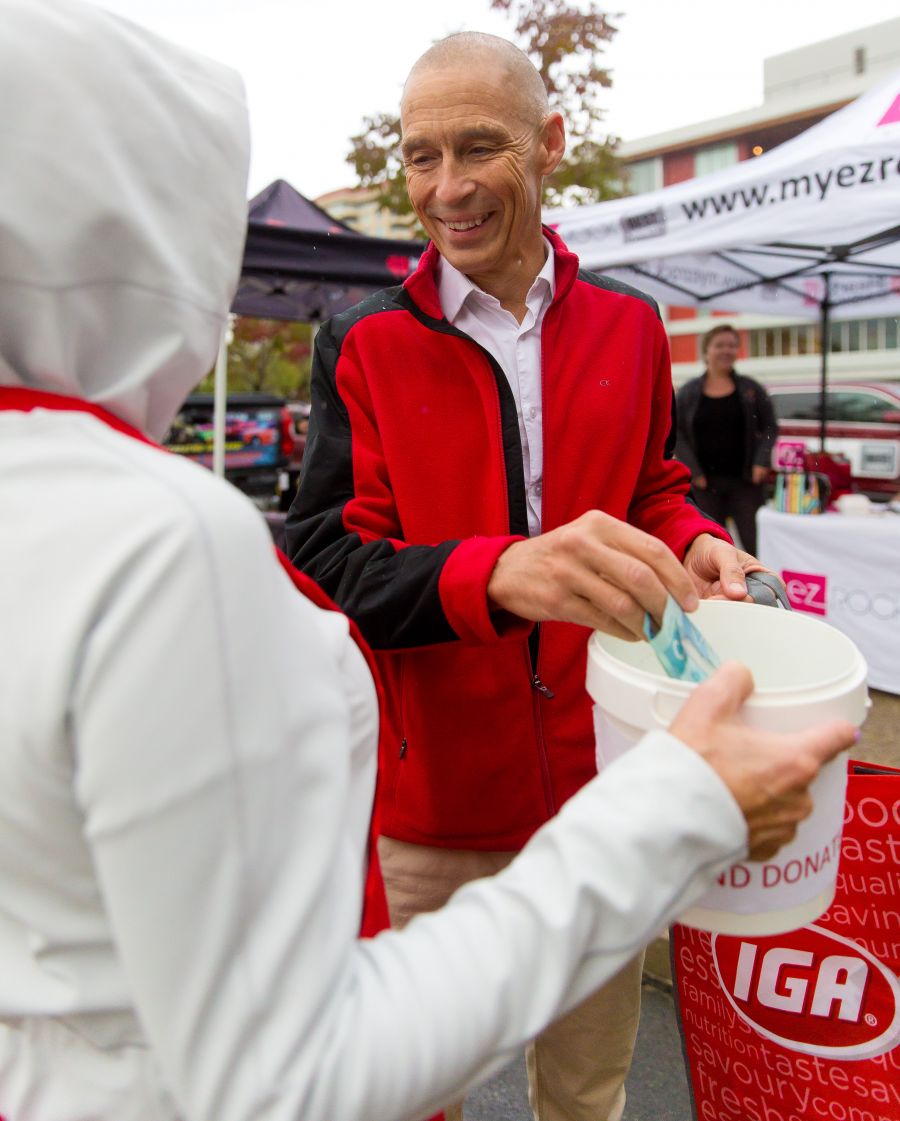 New to the Breakfast was Bill Hatch. And in a case of first time lucky, Hatch opened his breakfast bag only to find he'd won a trip to Vancouver to watch a BC Lions football game and luxuriate at Best Western Sands Hotel in English Bay. Hatch was understandably all smiles afterward. 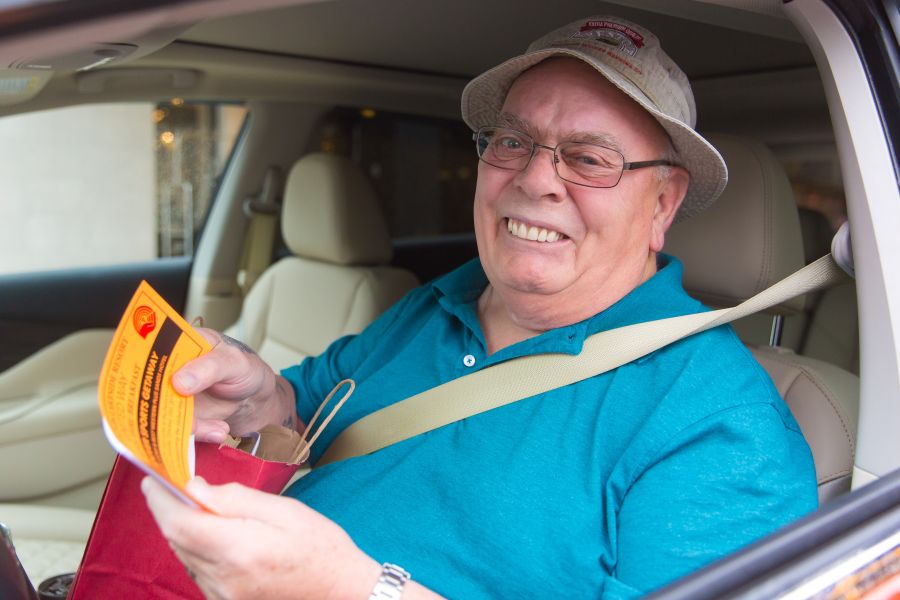 Perhaps the biggest group of the day was the platoon from Murray GM. A dozen of them came through, taking a total of 20 breakfasts back to the dealership. That they handed over a cheque for $1,000 got them the VIP treatment - again. They do it every year. 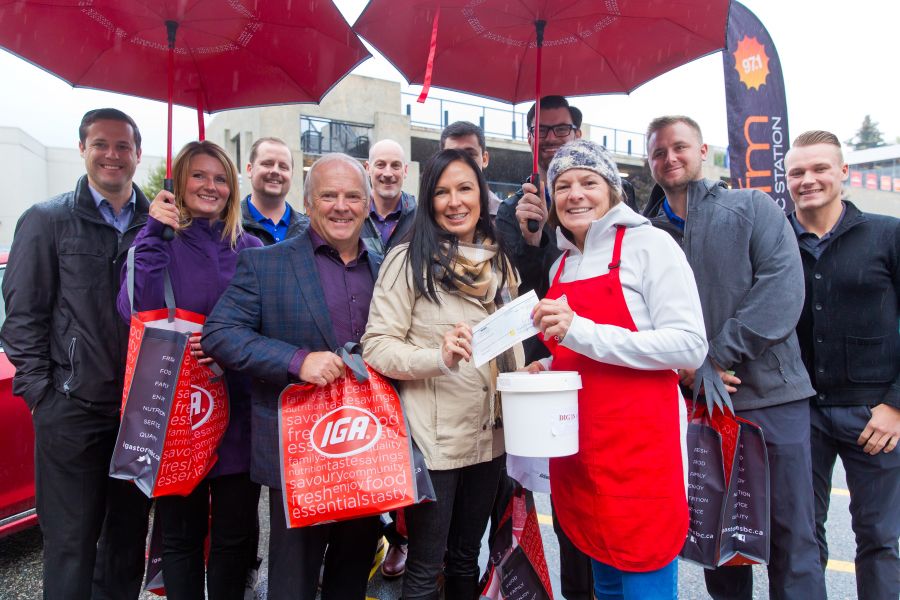 Another Breakfast regular is Colin Powell of the Penticton and Summerland IGA Stores. Powell is one of those guys who gets involved in a ton of local charitable events, and today he was handing out all sorts of goodies. 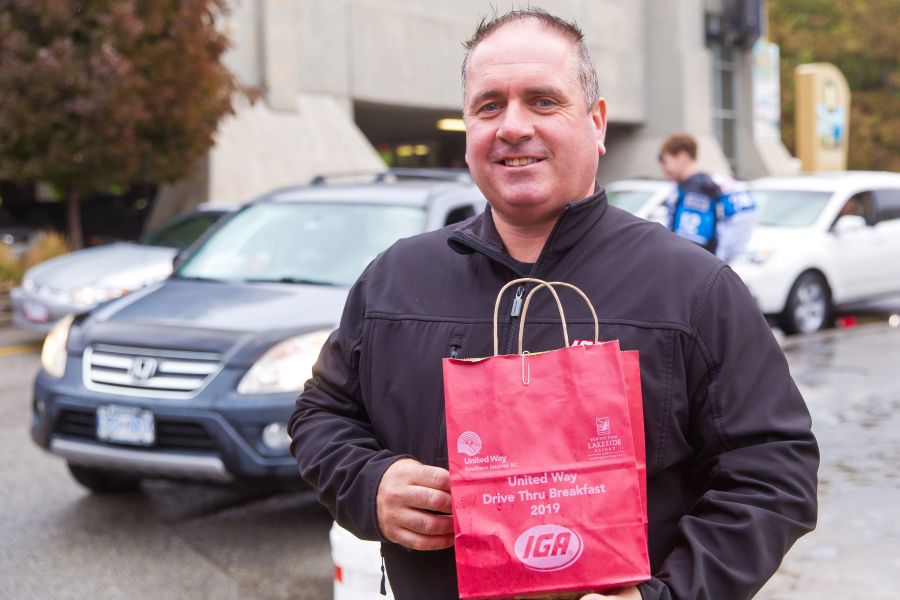 "We try to support our communities where we have our stores, and we have a great community here in Penticton," he said. "We're a major sponsor for this event. And we're also giving out our covered shopping bags, along with bananas, Sun-Rype juice, granola bars, and Sun-Rype bars." 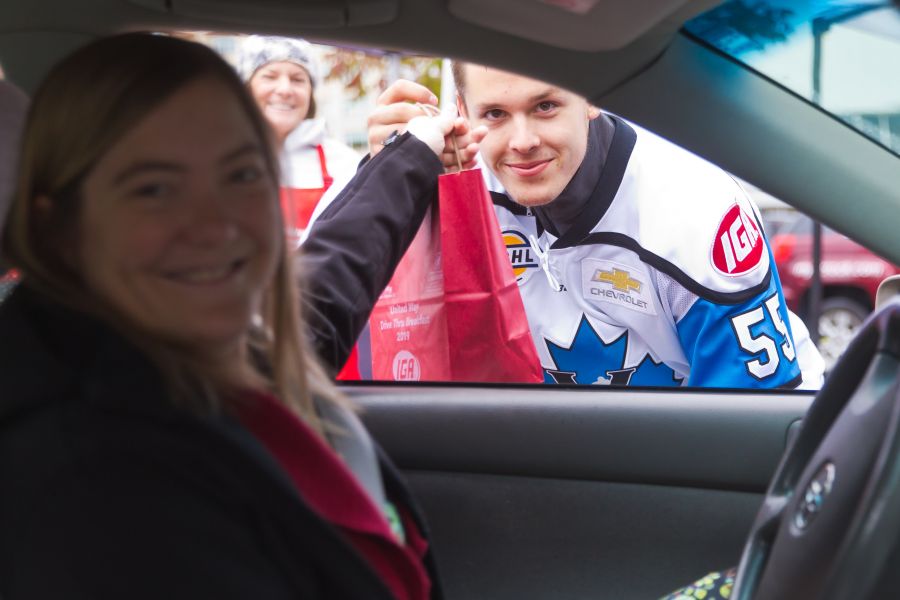 Dahl was proud of the effort. "The Vees were out there on the street drumming up business for us. Richard Canning (South Okanagan--West Kootenay MP) has been at the end of the line, putting all the bags hanging on the mirrors back into the cars. And we had one lucky gal (Penticton's Kim Guenther) win $1,000 from Valley First Credit Union." 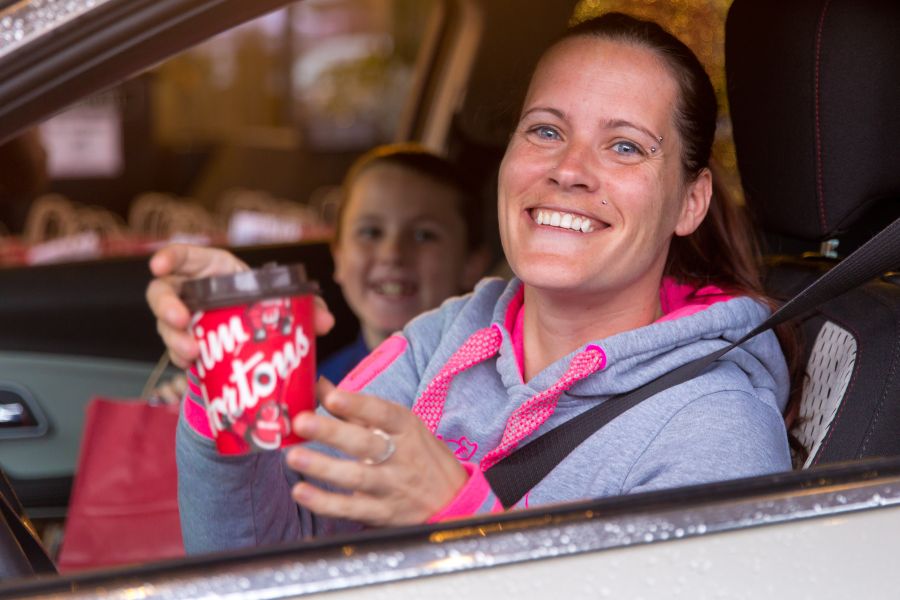 And she was particularly upbeat about this year's big-ticket donators and supports, rattling off names like Cascades Casino, Penticton Speedway, IGA, Valley First, Cobs Bakery and the CRA as going above and beyond. And a last minute cheque from the Lakeside itself that helped put them over the hump. 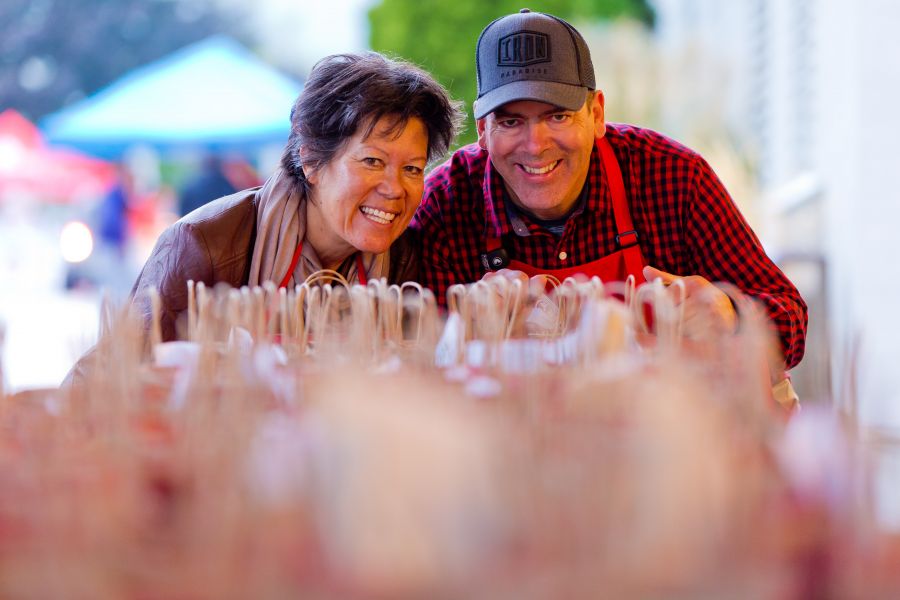 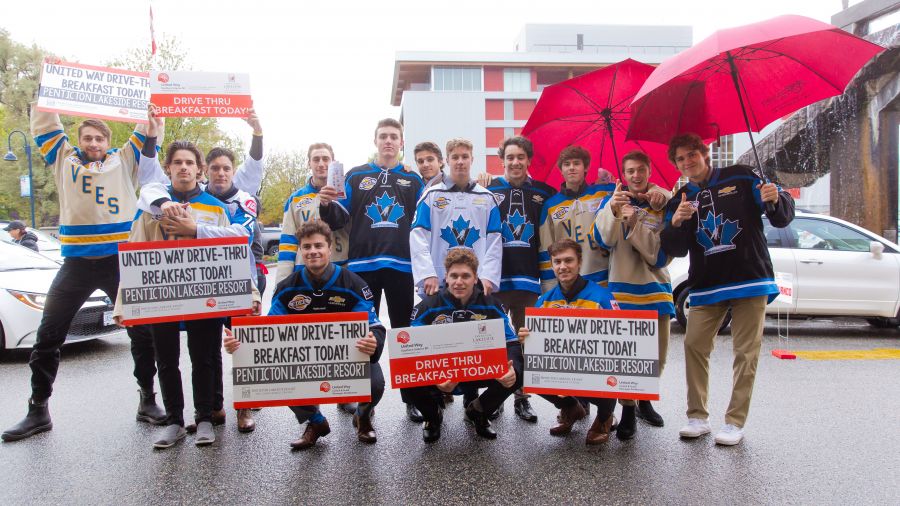