Peach Fest 2019 opens August 7th, and it promises to be a huge day for fans of aerial exploits. First up will be the Canadian Forces Skyhawks parachute team at 5 p.m., followed almost immediately by the Canadian Forces Snowbirds aerobatic squad. It'll be a frenzied two hours.

But as it turns out, Pentictonites with an eye on the sky had an advanced preview of the Skyhawks today. 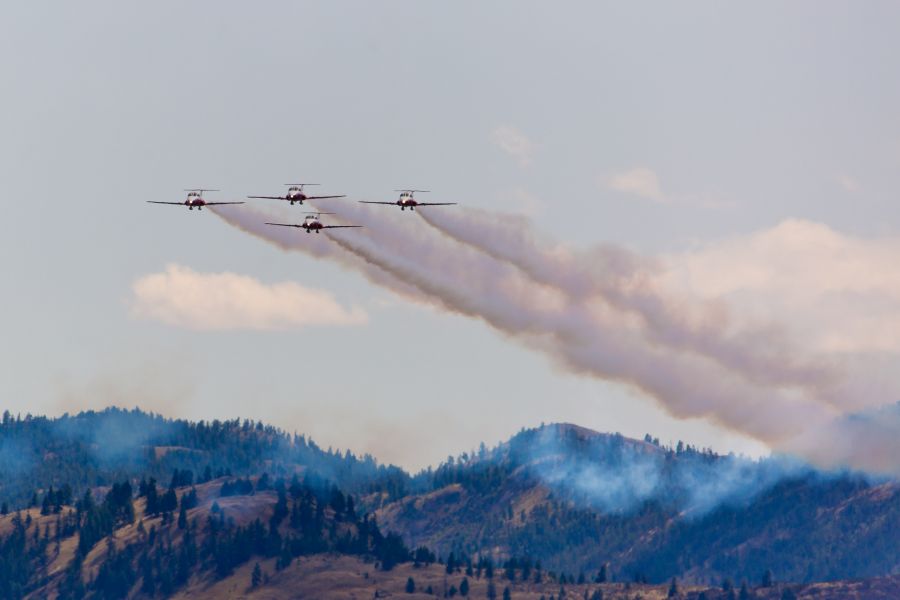 All eleven aircraft (two advance team planes and nine "show" planes) touched down for fuel stops at the Penticton Airport on their way to Delta's Boundary Bay Airshow this weekend. The advance team landed just after 10:30 this morning, and the big group hit the tarmac between 2:00 and 2:30.

Captain Sarah Dallaire is the pilot of Snowbird 2. It's her second year on the team and she says she's living the dream.

"For me it's special because I got inspired by Maryse Carmichael. She was the first female Snowbird pilot, and I was 12 at the time when I saw her fly in Quebec City, my hometown. And I thought it was the coolest job ever." 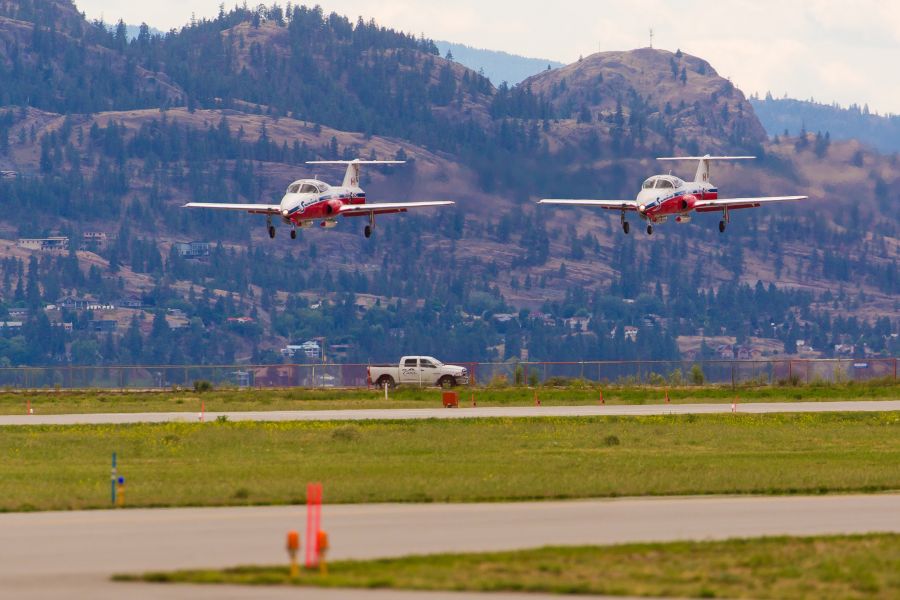 Dallaire signed up with the air cadets right away, then joined the Air Force at 17. "And I decided to apply for the Snowbirds, and it was pretty neat because Maryse was at my selection."

And she gave us a glimpse into the Snowbirds August 7th Penticton performance. "This year's show is a bit different. We've added a new split that no one has ever seen before this year. And when I asked the crowd what's their favourite, they all said it's that split, right at the beginning of the show. It's called the Athena Split. I'll let you discover that it's all about, but I can tell you it's pretty fun to fly."

Captain Jennifer Casey of Halifax is the Snowbirds' Chief Public Affairs Officer. She says she started her career in media, as a reporter. "But I was looking for something different, and found myself in the military five years ago. It was a summer gig, and then the Snowbirds came knocking." According to Casey, who's also working on her private pilot's license, the Snowbirds' aircraft is Canadair CT-114 Tutor. "It was originally used for training. It was our jet aircraft trainer. It's a very stable aircraft. During the show you'll see nine of them in close formation. They're very good at formation flying."

From the Penticton Airport runway, Casey points to two residential towers on the other side of town - 160 Lakeshore and 75 Martin - and says, "That's where they've built the aerobatic box. They'll sanitize that airspace so there's nothing else flying around, so we can do the crazy stuff you see us do."

The show, she says, will run roughly a half hour and will include "lots of smoke." Captain Ari Mahajan was born in India but grew up in Delta, so he was particularly psyched about the Snowbirds visit there this weekend.

He says he landed the Snowbirds position by "being in the right place at the right time." "I started flight training in 2016 and got my wings a year after that. My commanding officer at the time was aware that I didn't want to fly the F-18. I wanted to fly the Buffalo. At the same time, the Snowbirds wanted to try something new. They wanted to take a guy brand new who'd just got his wings and bring him into the squadron." 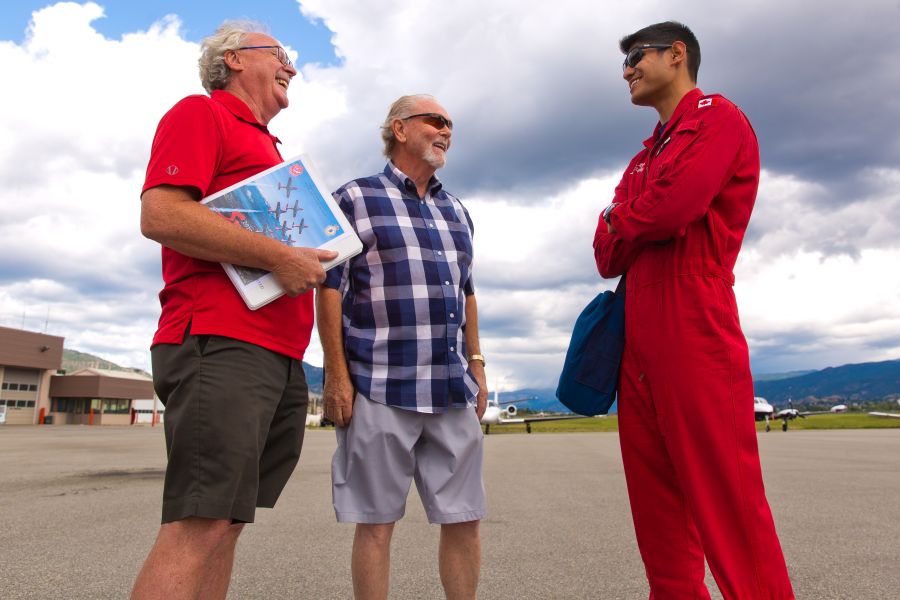 And he makes no bones about it. Flying a jet, he says, is "awesome."

"That straight vector thrust - it flies pretty nice. But also, flying in formation I think is the most enjoyable flying you can do. It's very satisfying and at the same time very challenging." This was Mahajan's very first time in Penticton. "I've been in Kelowna several times, and I absolutely loved it. And I'm getting that same feeling here."

But as an "advance team" pilot, he won't be flying in the show. Not this year, anyway. "There's a lot of training that goes into the (Snowbird) 1 through 9 positions. Those pilots are not replaceable in any way. If one of them is sick, they'd go with eight."

But he may soon get his time. "My tryout process will take place next February. And yes, I really want to be a Snowbird show pilot."