It was full-on party mode last night at Boston Pizza. There were raffles and prize giveaways and a silent auction. There were boisterous sing-alongs. There was a magician performing slick table tricks. There were group dances to festive faves such as the Macarena and YMCA. And of course there were food and beverages galore.

But beneath the celebratory facade was the bond that most of the evening's participants shared. And it was a bit easier to see in some.

Like Penticton's Maureen Chatham. Maureen's daughter Melissa was beaten to death in 2008 by an ex-boyfriend. And the pattern of abuse - and physical assaults - started long before that.

"We tried to support her," said Chatham last night. "We tried to get her to leave the relationship, but she kept going back. And each time she went back, the violence got a little worse, until he finally killed her."

A decade has passed since that fateful day, but Chatham continues to relive the tragedy in her nightmares. "I begged her to come back home. I begged her to block his number. She was killed just five minutes from the Surrey Hospital." 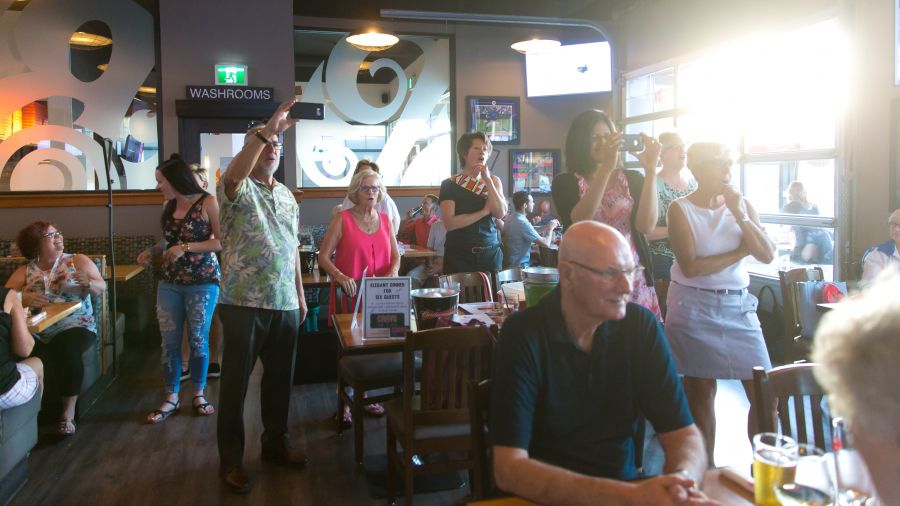 Moreover, she says, Melissa's murderer is now out of jail.

She often wonders if there's something she could have done differently to rescue her daughter. But deep down she knows there isn't.

"I'll never blame the victim. If you're in a domestic abuse situation, the victim loses any strength they ever had, and they blame themselves."

But Chatham, heroically, learned to channeled her grief. She became a regular speaker on the high school circuit, telling Melissa's story to anyone who'd listen. "What happened to my daughter I don't want to happen to anyone. If I can help one person..." 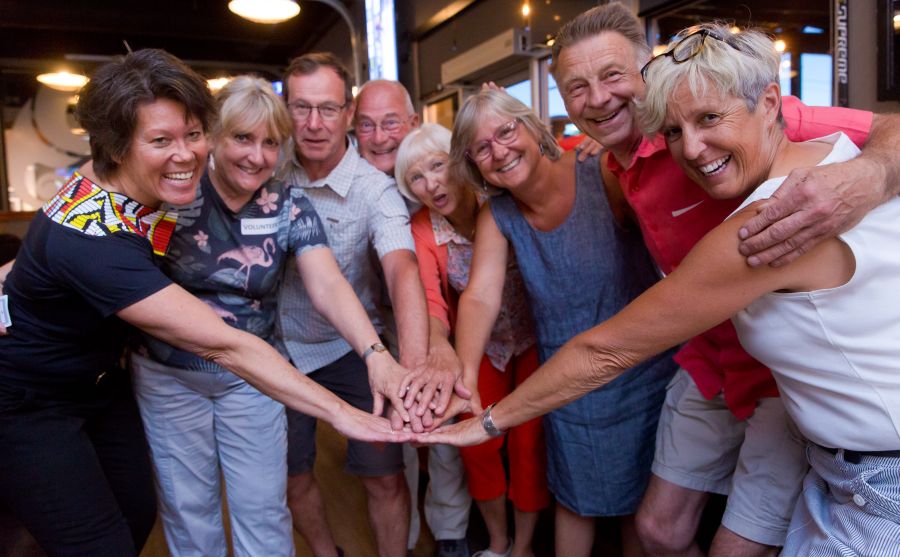 More than that though, she also created a scholarship in 2009 and awarded it to a deserving student at her daughter's alma mater, Surrey's Tamanawis Secondary. And now that Chatham has moved back from the lower mainland to her original hometown of Penticton, she'll award that scholarship to a student of Princess Margaret Secondary.

And something else. Chatham has also become part of the South Okanagan Women In Need Society (SOWINS). Indeed, that's the reason she spent a little time at Boston Pizza last night.

You see, it wasn't just any old night at the pizza joint on Main Street. It was a launch party for SOWINS' 2019 Walk to End Abuse, scheduled for 10 a.m. June 2 at Rotary Park. And the place was loaded with folks with similar stories to Chatham's. 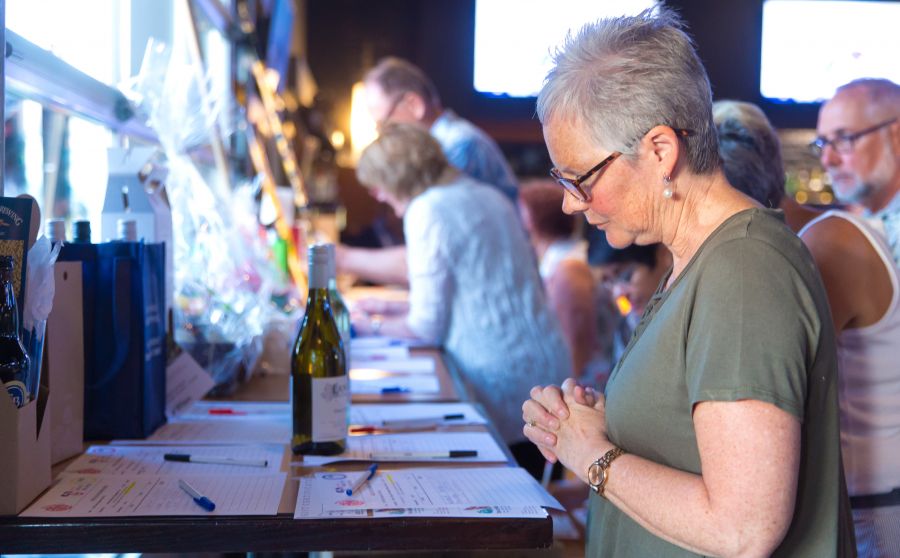 And, she says, what happened to Melissa Chatham is far from an isolated incident. "If you're told over and over again that nobody would want you, to go ahead and walk out the door but there's no way you're taking the kids, it can feel like an impossible situation. I've worked with women who've been shot, stabbed, and chosen suicide over living." 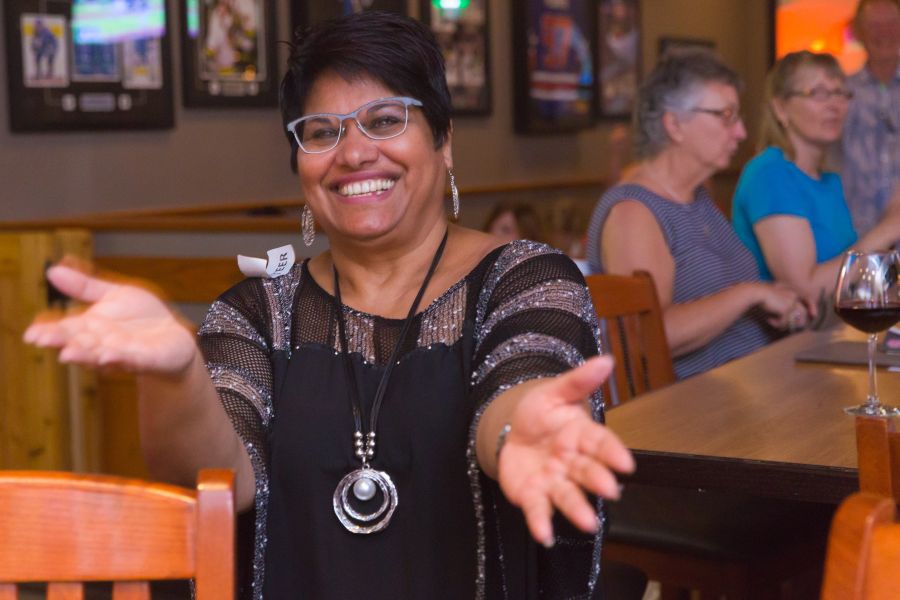 But the Friday night gathering was all about the upcoming walk. "Last year we had more than a hundred people," said Scarborough. "Some of the people who show up will just be checking it out. Like, is there support if I come forward? If I find someone to share my story with, will I be supported? Because I don't feel worthy."

Despite the backstories, the mood last night was upbeat. And for that, Scraborough credited Boston Pizza owner Derek George. 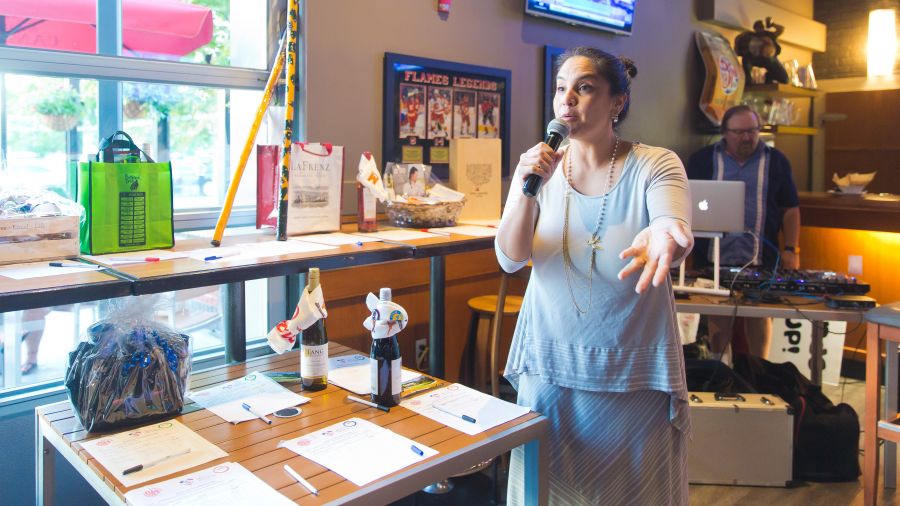 "He's a big supporter. He does so much for our community. He supplies employment and practicums for women. He even encourages women and children who are staying in our transitionals to come here for a meal, pro bono, and he'll just stand guard and make sure they're not harassed."

For his part, George spent a lot of time bussing tables last night and making sure the evening flowed right along. 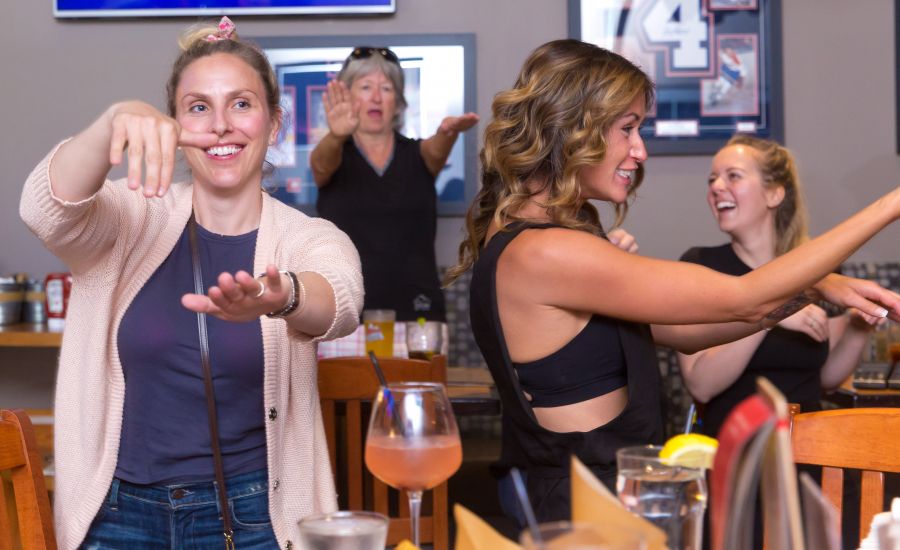 "We've been touched by domestic violence in our family on both sides, my wife's and mine, and SOWINS is something we want to support locally. It's near and dear to our hearts, having experienced it firsthand, and being able to support this event is good for us."

George said it's the first time his eatery has hosted the walk launch party, and he hopes it won't be the last.

"It's really good tonight. I want to thank the local wineries and the Penticton Vees for their silent auction contributions. Everything tonight goes straight to SOWINS." 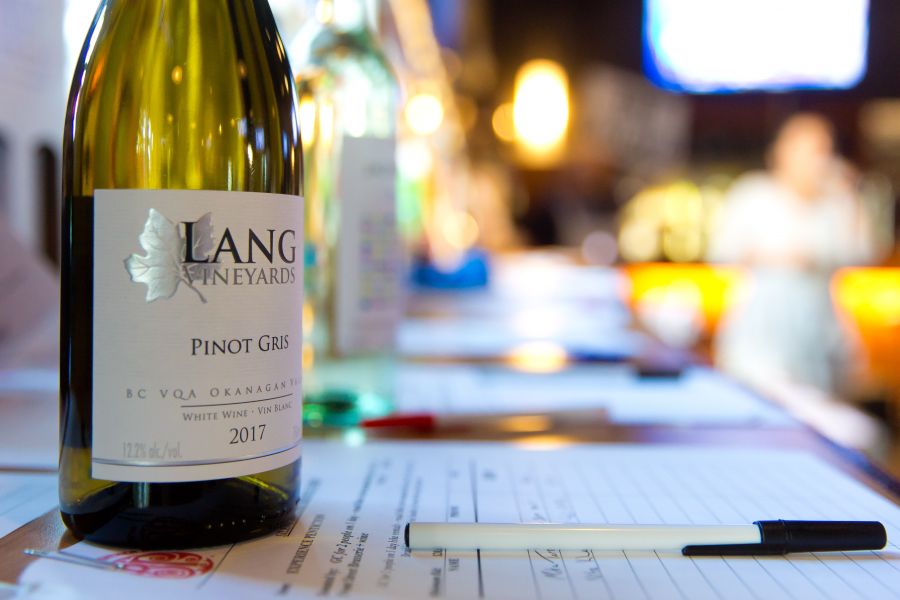 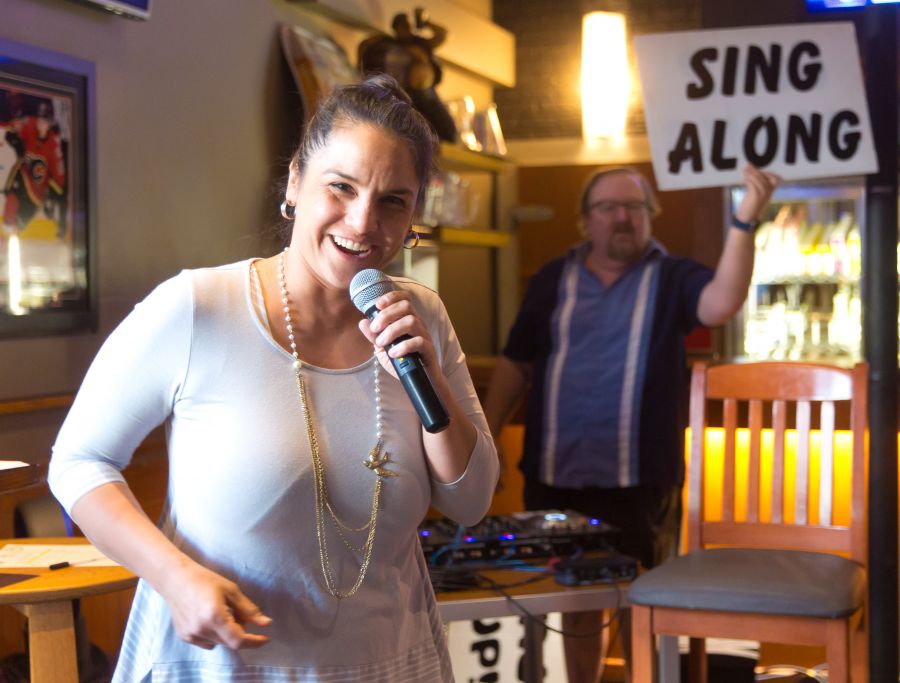 Midway through the event, local "song catcher" Yanti got the whole group involved in her sing-a-long. The positive vibes were downright contagious.

"It's specially designed for people who have childhood trauma of being told to be quiet or not to sing. It's a great trauma to be told to not sing. Everyone has a voice. We just have to figure out what our voice sounds like. If you don't like the sound of your voice, you can develop that."

Throughout the night, award-winning magician and mentalist Ryan Michael of Kelowna elicited oohs and ahhs as he demonstrated his close-up sleight of hand routines. And DJ Russ Triet kept the aisles filled with dancers - not an easy feat in a restaurant setting. 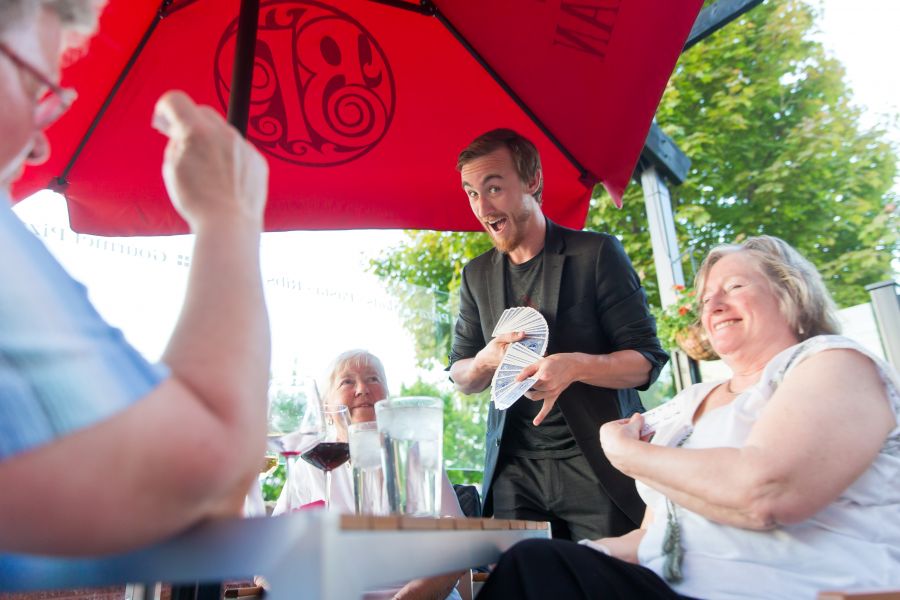 And the evening was made all the better when an anonymous donor stepped up to say they'd match 100 percent of the proceeds. Still, SOWINS can always use more donations. If you're interested in contributing, head to the SOWINS website.

Though, said Scarborough, "Donations are always accepted, but the best thing people can do is to not commit an act of abuse. If everyone did that, I'd be out of a job. And I could retire." 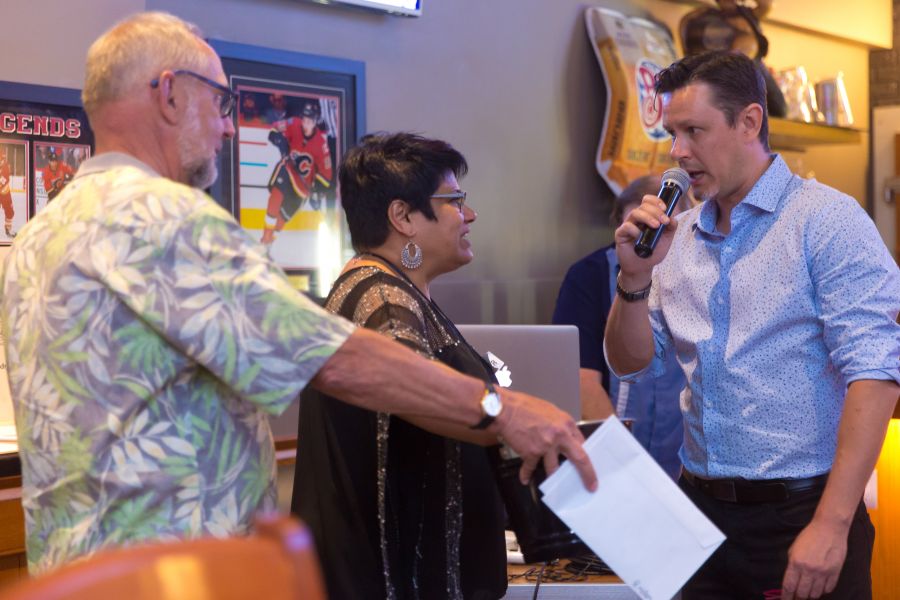 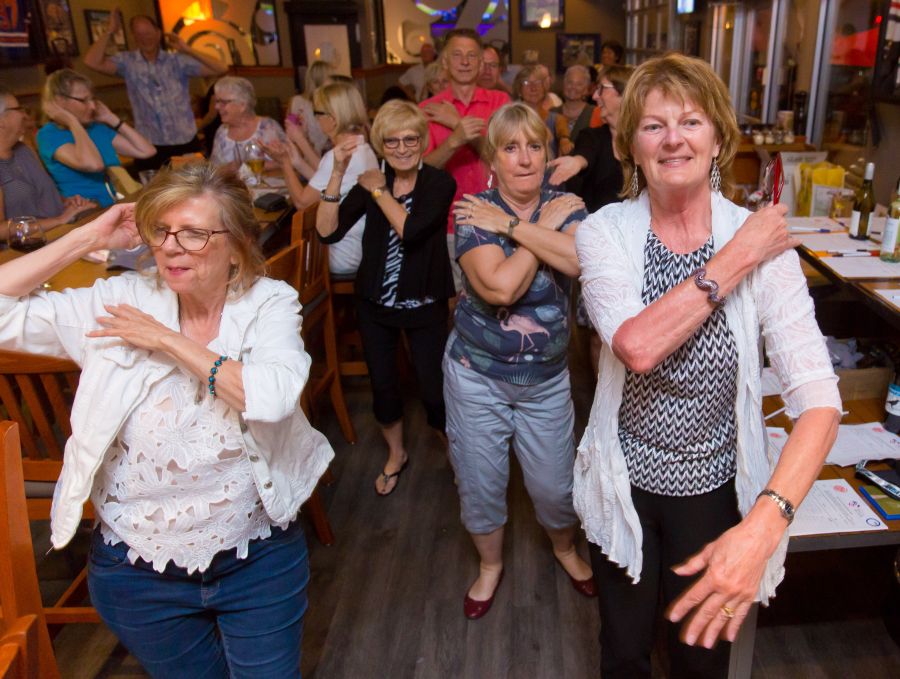