Penticton, your Pride is showing!

Amongst the overwhelming number of Elvises and hot rods flitting about town this weekend, not to mention the fans and followers of each that essentially brought Penticton's northern waterfront to a crawl, it might have seemed like there was no room for anything else. 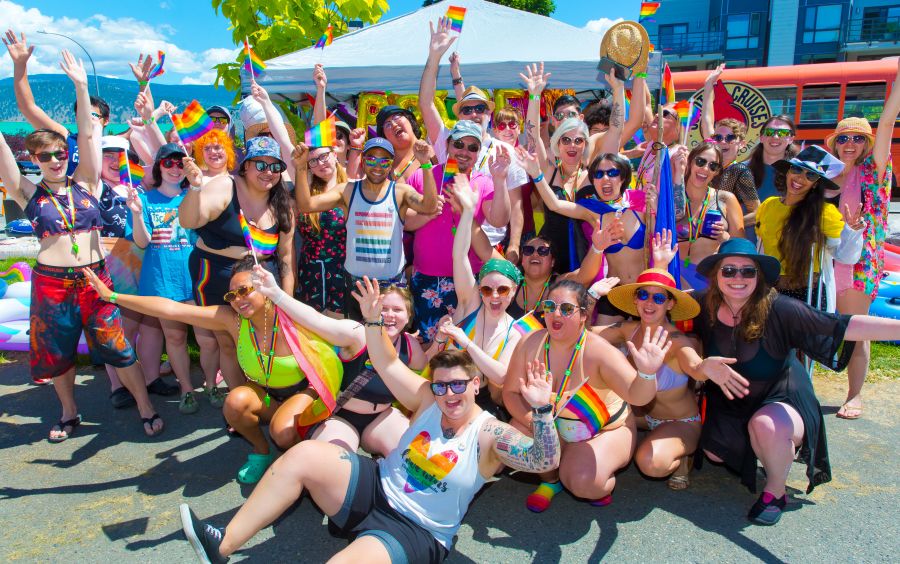 But there was. Two other events in fact -- both of which combined to create what may have been the most powerful -- not to mention outright fun -- weekend in Penticton Pride Month history. The first unfolded Saturday afternoon at the Penticton Channel -- launching from Coyote Cruises -- when the first "Fruit Float" since pre-pandemic 2019 took to the river. And this year there were more "fruits" than ever, which is precisely what organizing body South Okanagan Similkameen Pride Society (SOS Pride) hoped to see. 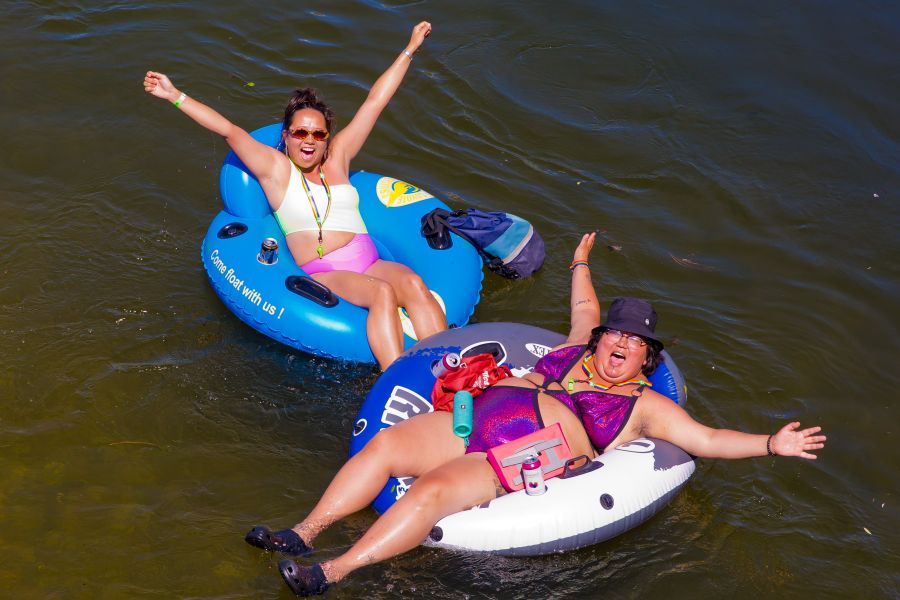 SOS board member Melisa Edgerly, who worked the event as greeter, co-organizer and swag giver-awayer, called it a "tremendous success."

"This is way bigger than our first year in 2019," they said. "I think there may be a hundred people here today." 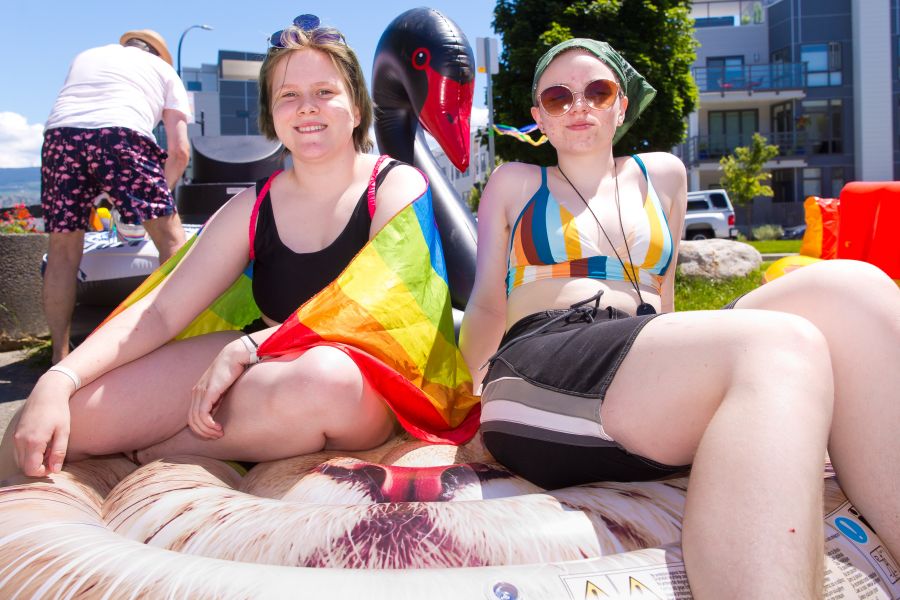 Of that number, the vast majority appeared to be 25 and under. They also appeared to be having a great time -- laughing, chatting, even dancing -- and certainly being themselves.

We figured that's a step up on prior Pride months and asked Edgerly, who works with the Penticton Youth Centre in their day job, if they feels it's been difficult for Penticton youth to "come out" in the past and if a continuing succession of Pride Months have helped ease the burden. "I think it takes some courage," they said, "I think we have some people who are very courageous in our community, to be out and proud. And I think this (Pride Month) is really great for people who aren’t necessarily out but get to see there's a community who supports them and that we will welcome them with open arms when they do decide to come out."

Amongst the hubbub we chatted with 18-year-old Lynn, who said they "love" Pride Month for the very reasons outlined above. 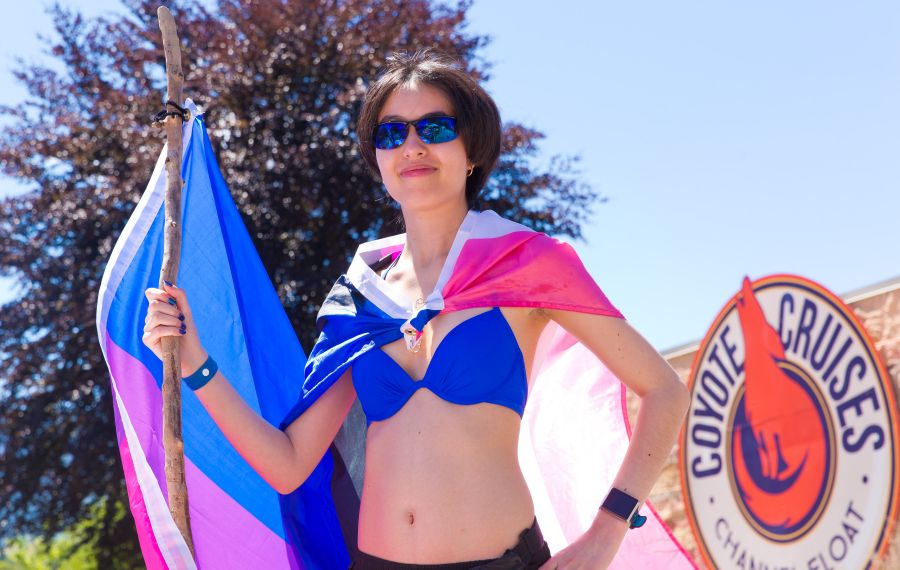 Lynn's dated boys and dated girls and has found the whole thing understandably confusing. Nor did they feel comfortable being called a "girl."

"For me, growing up was and is really confusing," they said. "Because you don't really talk about it at school and you never think the (sexual identity/preference) question, at least I never thought the question, until I turned 18. "But I had a lot of lovely friends who helped me through it. Mostly you rely on the community. Like having Radar (a program primarily for 2SLGBTQIA+ kids) and the Pride community has been the way I've figured things out."

Soon, the crowd had tentatively stepped into the still-chilly water and was on its way. The river's moving quickly these days, and most had hit the halfway mark within 20 minutes. 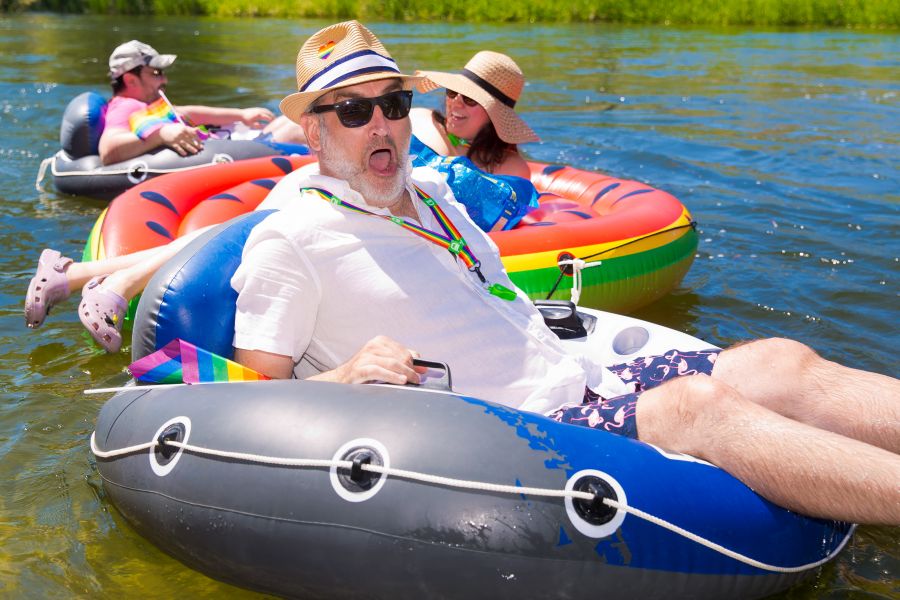 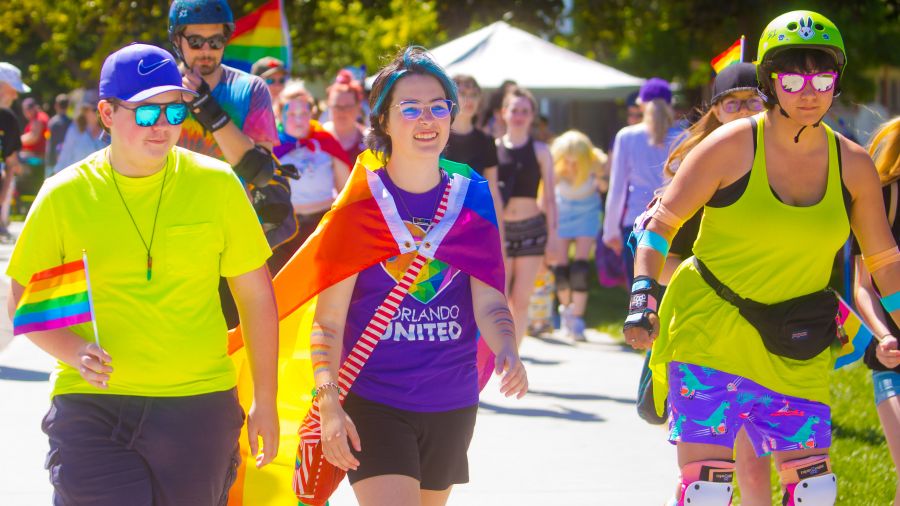 And once again the turnout was bigger than the organizing group -- a team-up between local educator Rachel Beeson and Penticton Roller Skate -- had envisioned. 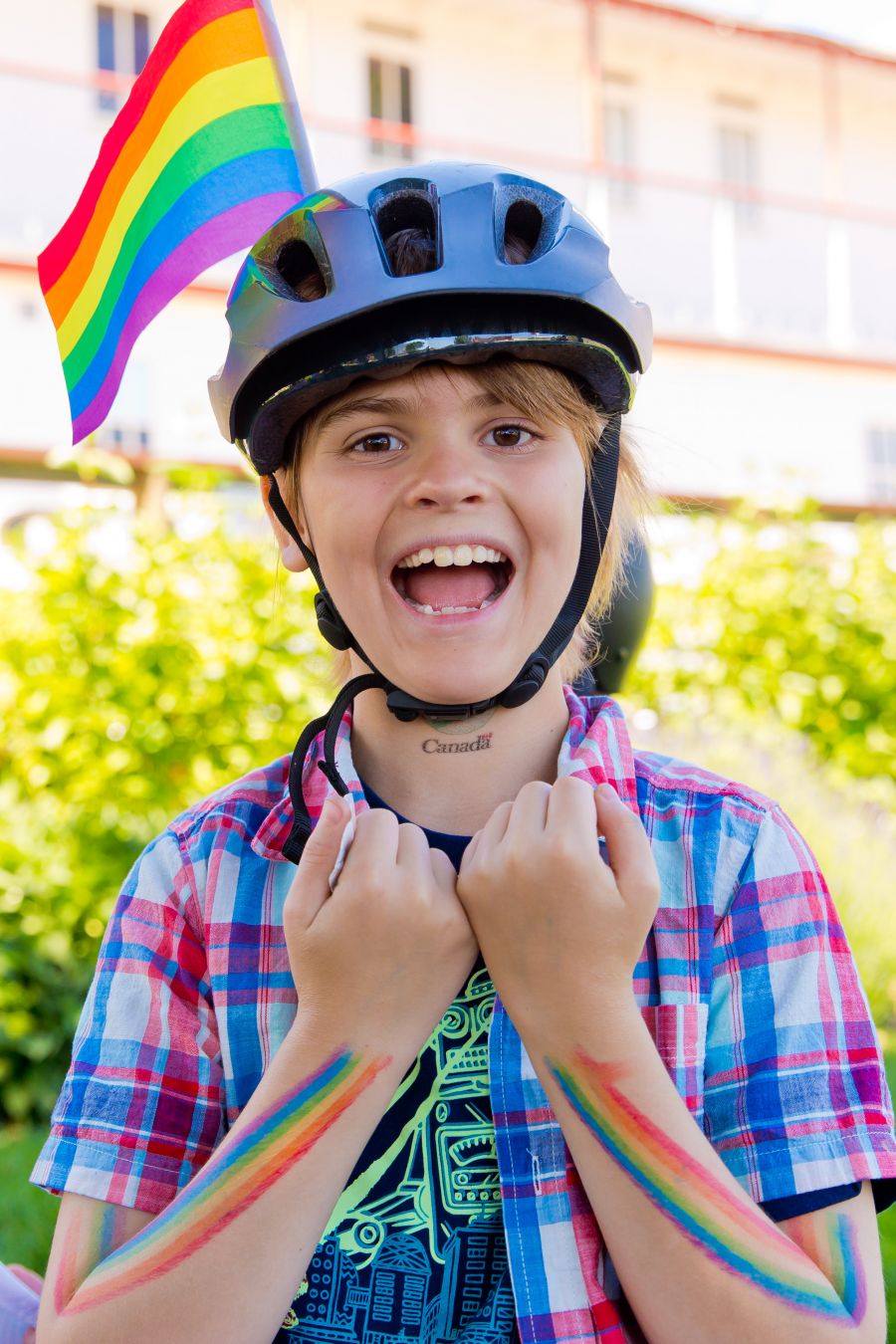 "I'm so happy and proud of all the people who've come out to support this event and be part of this community," said a busy Beeson during one of very few breaks. 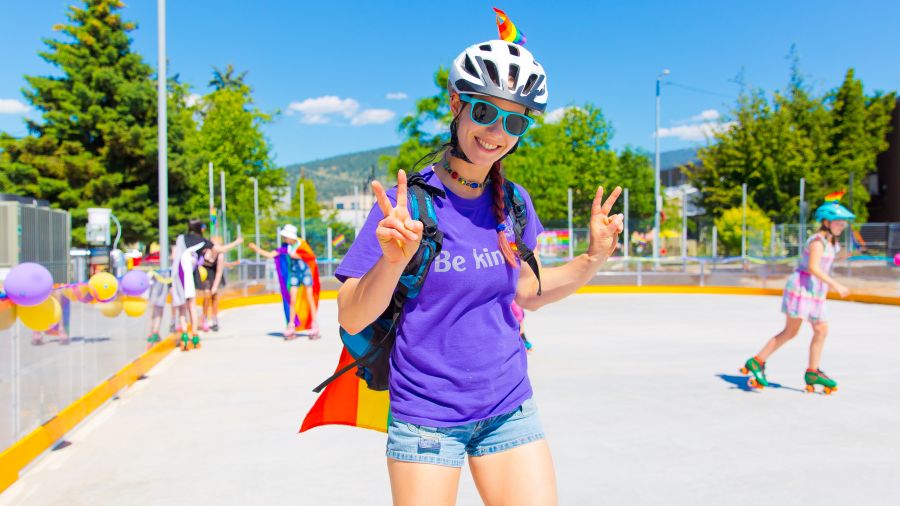 "I didn't expect this sort of turnout. I believe it's community support and getting the message out. The PentictonNow article was fundamental in changing the momentum of this. People were invited from schools and from the Penticton Indian Band, and SOS Pride has brought so much into this as well." 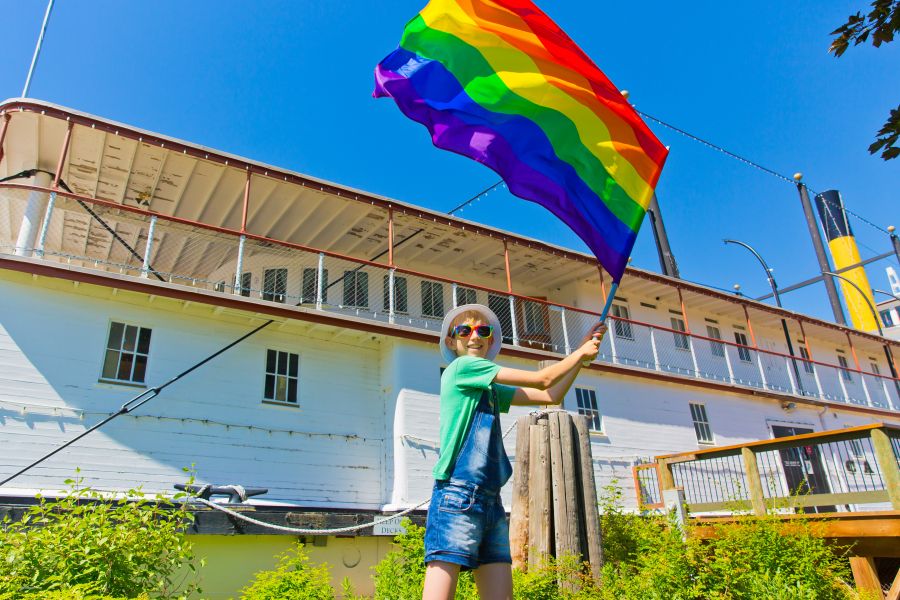 "I’m from Vancouver myself and you don’t get it (discrimination) there as much as you do in a small town," said Crystal, walking in the parade with wife Jackie and family. "So it needs to be known that we're here in small towns too. And hopefully every little march you do, every little concert that's held, will help." 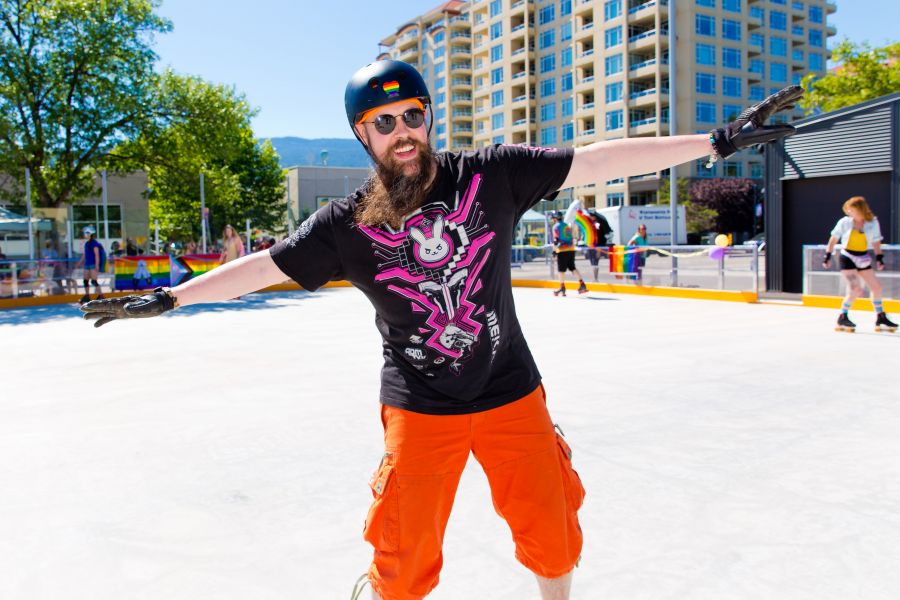 Meanwhile over at the rink, where the music was thumping and the chatter was non-stop, those who knew how to skate did, those who didn't tried, and virtually everyone wore or flew rainbows. A late arrival was Penticton resident Styles Kruger, who attracted some attention when he showed up in a frilly pink and white frock that was immediately praised by everyone within earshot as "so cute" and "really pretty." 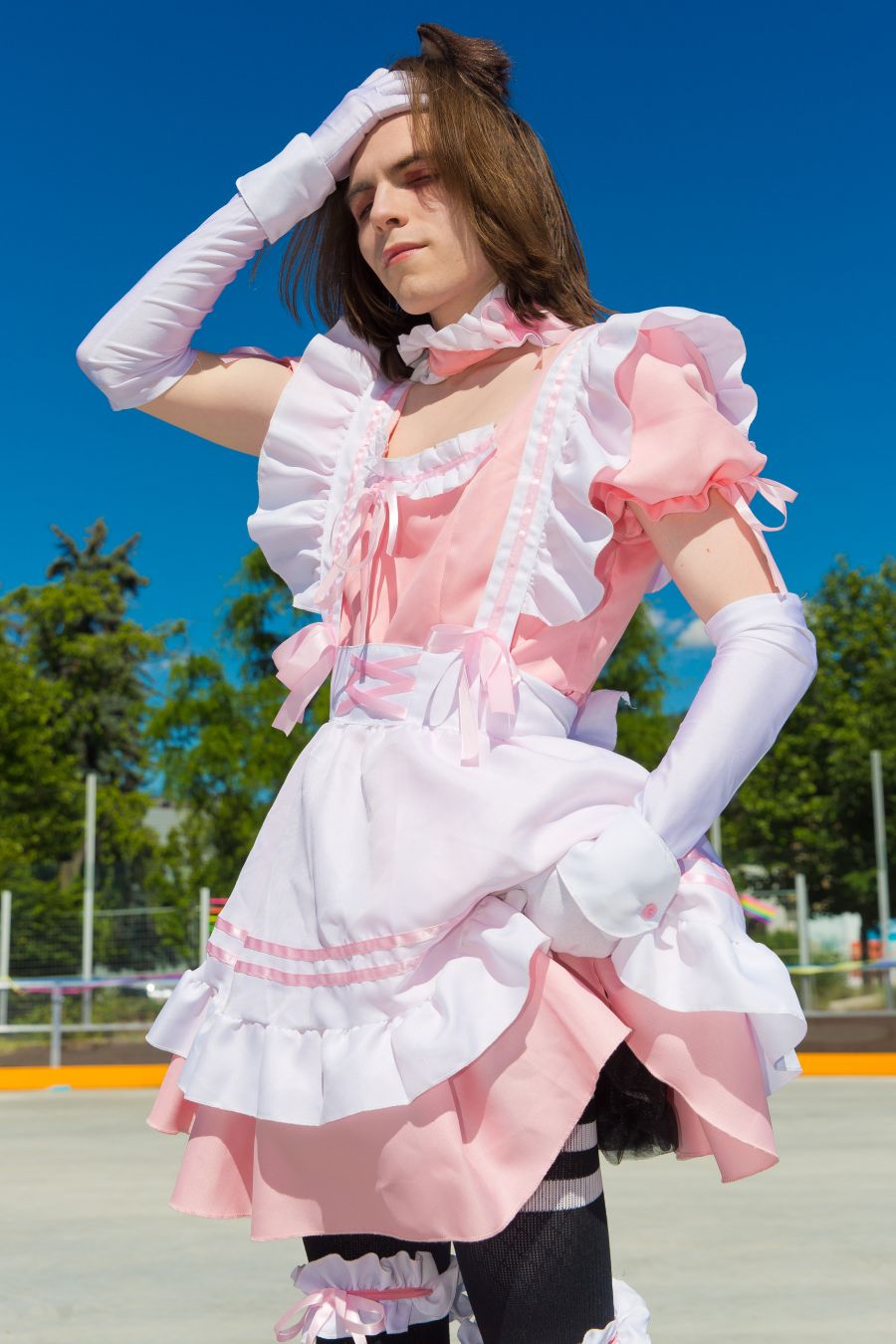 Turned out it was Kruger's second outfit of the past half hour. The first -- essentially a Playboy bunny costume -- was replaced in a nearby washroom when he feared the crowd was too young for the reference. 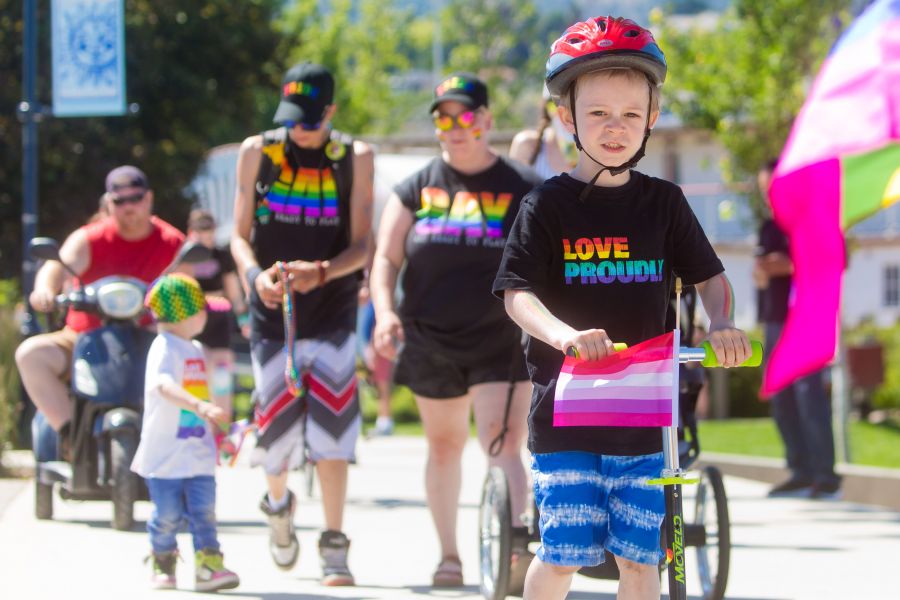 "I'm here to celebrate pride and express myself. But I'm really here so I have an excuse to wear something like this," he laughed. 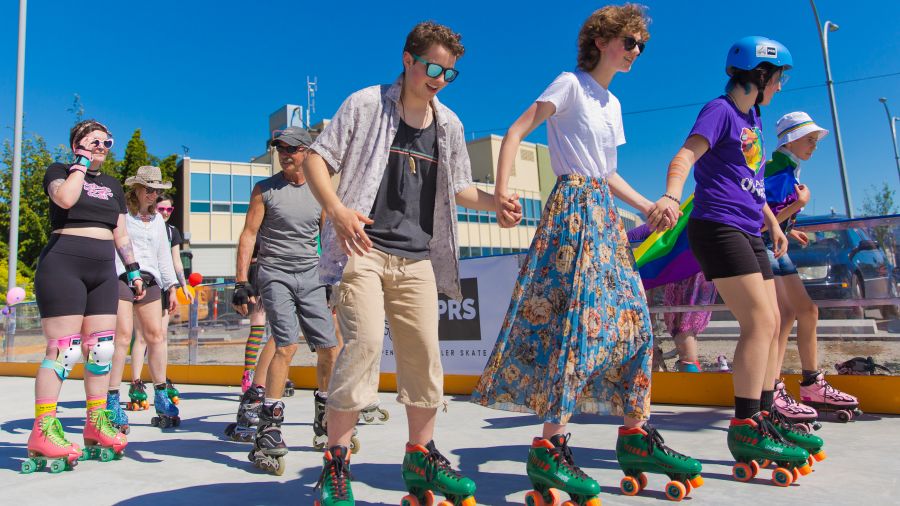 "It's an excuse to go out in public, hang out with like minded people, and just see the progress that's being made in the community. Because a few years ago I could see nothing like this happening." We asked Kruger if it takes guts to wear such an outfit in public, and the answer was an unqualified "yes." "Oh yeah," he said. "I was shaking, I had the jitters, I had a whole lot of thoughts of what would happen here today. "But it's way better than I thought it would be. It's just people hanging out, having a good time, enjoying the sun, just getting out and expressing themselves. "And that's what you have to do. Express yourself. I think people are more open-minded these days. And it's people expressing themselves and showing their strength that helps people change their minds." 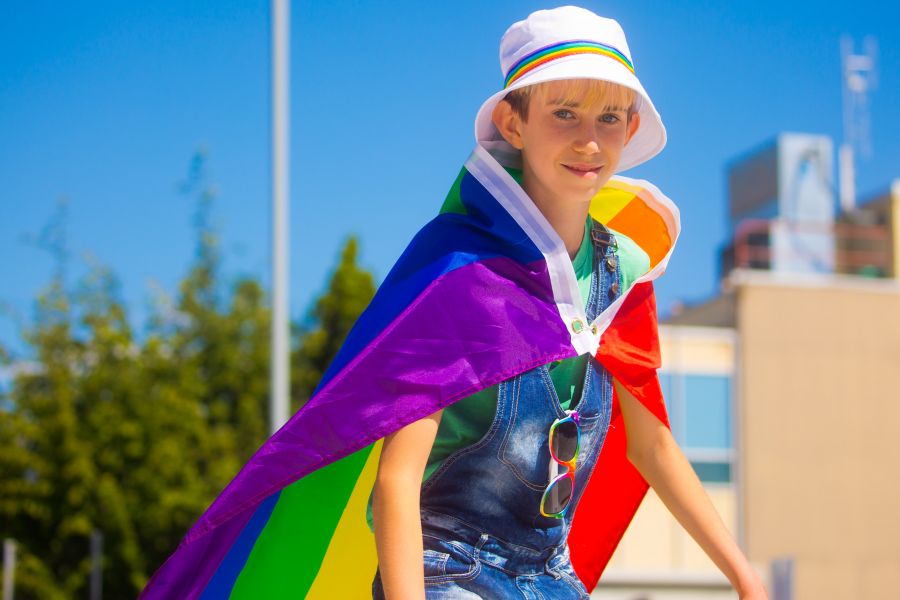