Penticton to begin clean up of heritage house destroyed by fire

More than three months after a fire destroyed one of Penticton’s oldest heritage homes, city staff are now looking for direction to begin the removal of the fire-damaged structure.

During the regular council meeting on Tuesday, June 7, city staff will be asking council to declare the property at 434 Lakeshore Drive as an unsafe nuisance that requires demolition, removal of all debris and levelling of the site.

On Mar. 7, 2022, more than 30 members of the Penticton Fire Department responded to the fire that destroyed everything except a 1.5 metre chunk of wall and the concrete foundation.

It was later determined that a gas explosion caused the fire, destroying the home which was originally built in 1912 for JJ Warren, president of the Kettle Valley Railway at the time.

In early May, a letter was sent to the owners encouraging them to contact the city to discuss the requirements for obtaining a building permit for repairs or alterations to the house.

On May 16, the city’s bylaw services received a complaint that the property was unsightly. The complainant also expressed concern that “exposed materials may be hazardous to the health of the neighbouring residents.” 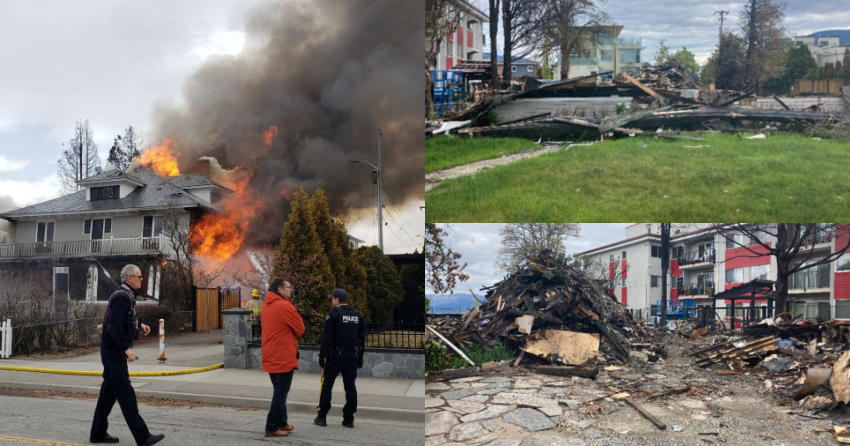 “Staff were informed that the owners had been awaiting approval of an insurance claim for eight weeks and were unwilling to spend additional funds on the property until that process has concluded,” reads staff’s report.

“The owners advised that there were currently no re-development plans for the property at this time.”

City staff are recommending that council pass the resolution deeming the property a hazardous nuisance and that it be cleaned up by July 11, 2022.

Staff’s report explains that if the owners do not complete the demolition and other actions by that time, the city will take over the work. However, the owners would be in debt with the city which would be collected in the same way as property taxes.

Finally, staff’s report explains that the land is valued at more than $1.1 million. If it is necessary for the city to take over the remedial actions, “sufficient equity in the property exists for the recovery of the city’s incurred expenses.”