Saturday was a day of transition at the Penticton Art Gallery. While the departing exhibit was being celebrated for its two-month summer stay, the central artist of the next was in the house and ready to chat. 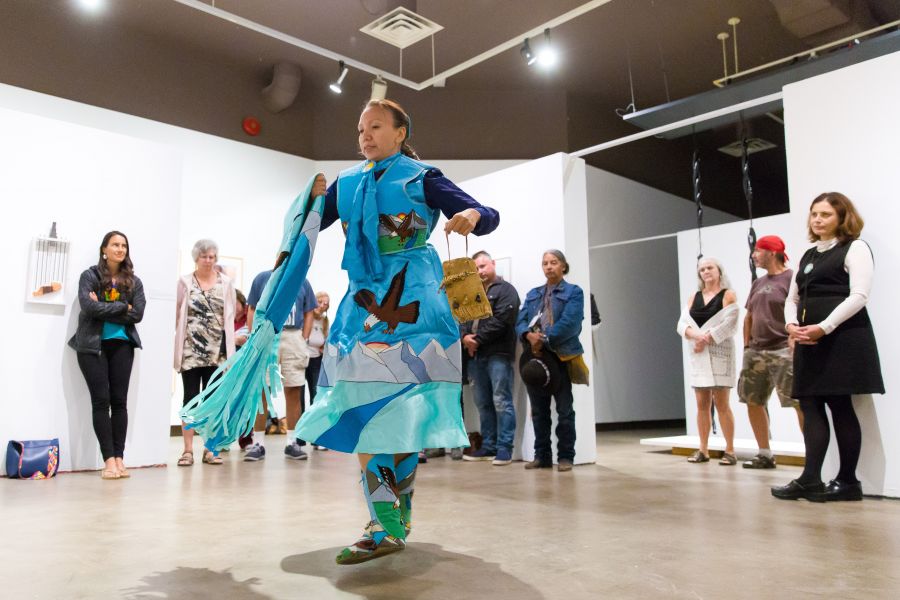 The idea for an "Exhibition Closing Ceremony" was the brainchild of curator Paul Crawford.

"I started doing these closing celebrations last year. Getting people out for our mid-year exhibition openings in the middle of the summer is difficult, so I thought of doing a closing in September."

"And there's a multicultural grant that I've got that helps out with that. It allows us to do a meal and celebrate. There's nothing better than breaking bread with people when you're done." 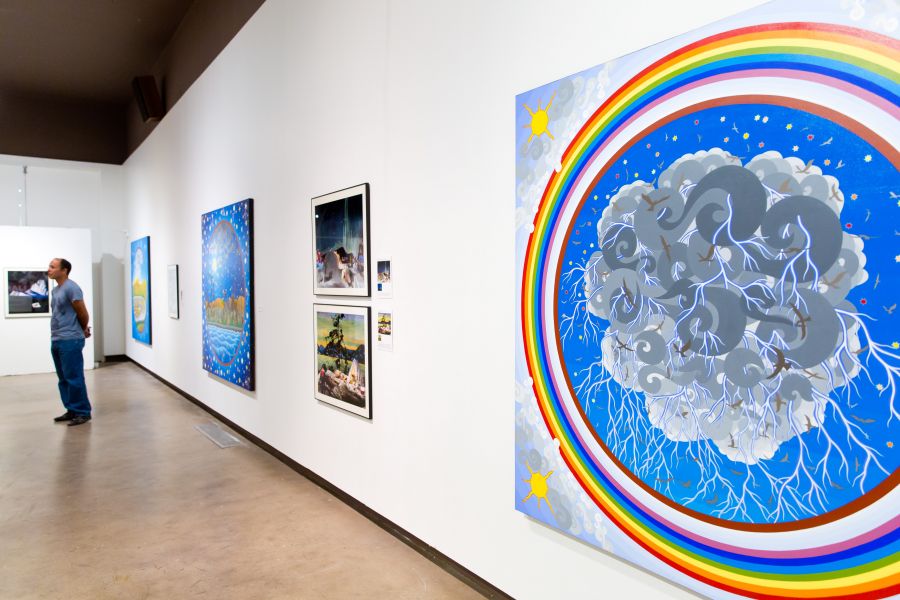 On their way out were "enTitle: Our home and Native land/Our home on Native land" and "Jasna Guy + Lincoln Best | Pretty: Useful."

The first, said Crawford, was all about "land and title issues across Canada, both from an indigenous and non-native perspective."

The second, he said, featured artists who "tried to bring that idea closer to home, examining native plant species and native bee species, and our role in the environment." 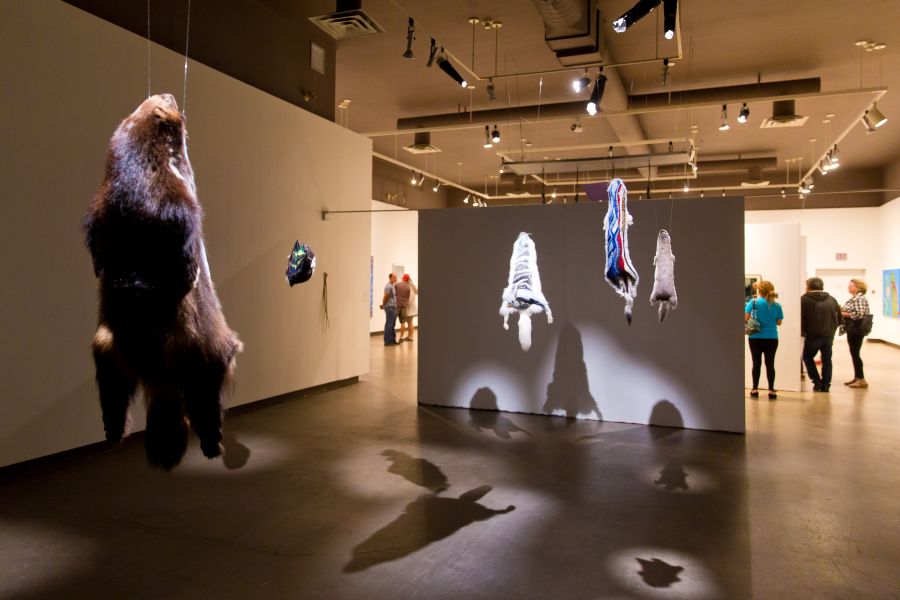 Indeed, it didn't take long for the entire crowd to join right in on her "fancy dance." 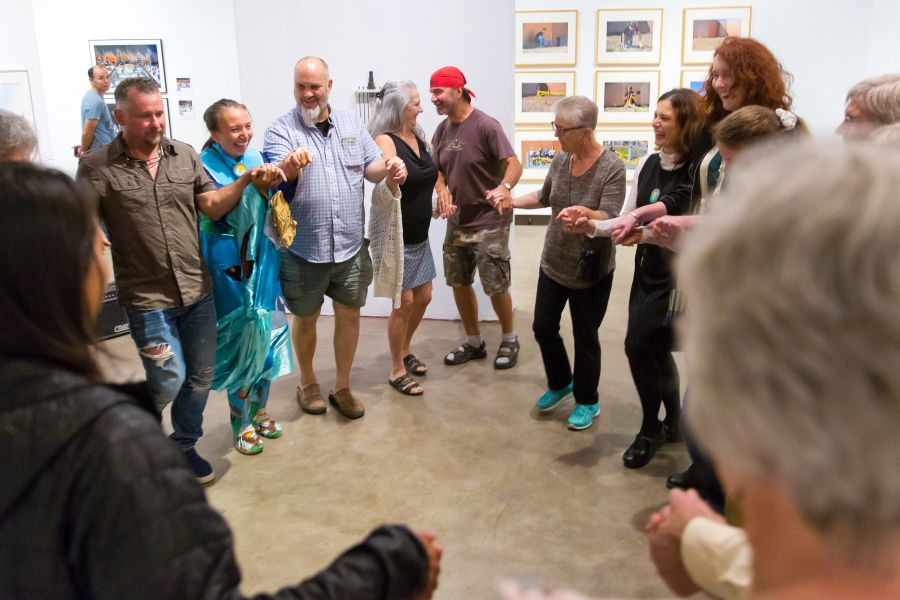 "Last year I was part of the racism exhibit," said Large, "and this year Paul asked me to come back and do a performance because it was well received last year."

Large said she'll likely be exhibiting again in Penticton in the future, after she finishes her next work, a series of "soul work dance paintings" where she dances on large canvases, eyes closed, unaware of the paint colour she's currently distributing. 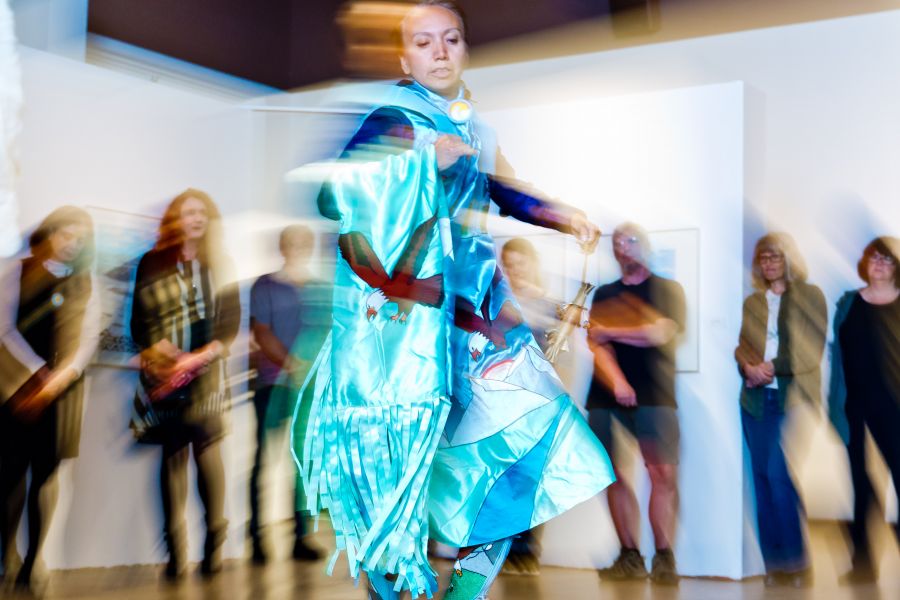 Just prior to the dancing, patrons got a taste of the gallery's next exhibit, opening this Friday, when Dr. Suzanne Steele addressed the crowd. Steele, a war poet who spent time both in Afghanistan and on the battlefields of World War I, will be the focus of the exhibit's two primary installations running through to Remembrance Day, November 11th.

"I'm a Canadian war artist," she told PentictonNow. "I was the first poet ever sent to the theatre of war by the Canadian government. Up to me, they mostly sent painters. But now they send choreographers, filmmakers, sculptors, all kinds of artists." 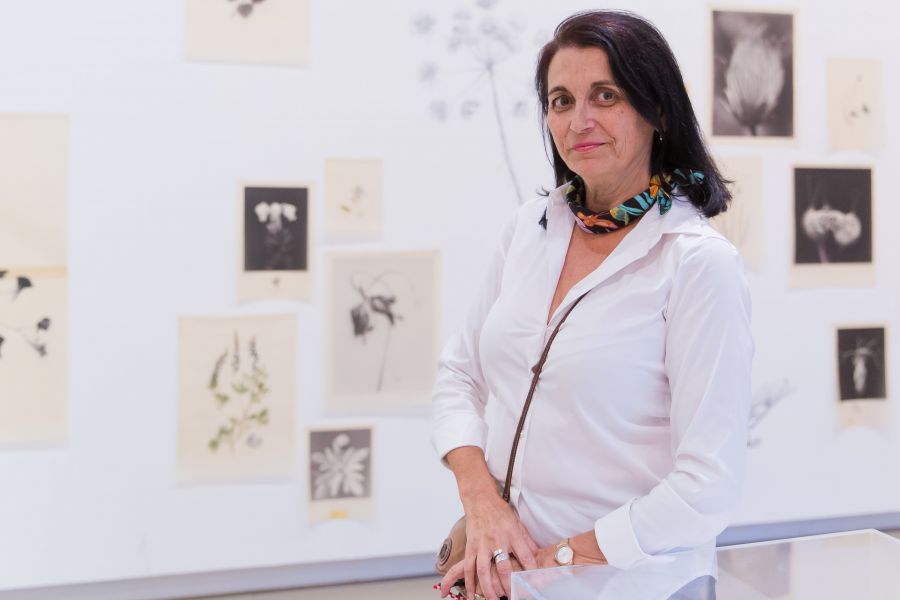 From 2008 to 2010, Steele spent 18 months embedded with the 1st Battalion of Princess Patricia's Canadian Light Infantry. "I went on exercises with them while they prepared, and then I flew out to Afghanistan and then to the front lines to see them, and then I watched them come back."

"So I actually watched the road to war rather than just going to see combat. I only ever experienced one rocket attack, but what I did see were these young Canadian men and women preparing for war, going to war, and then coming home." 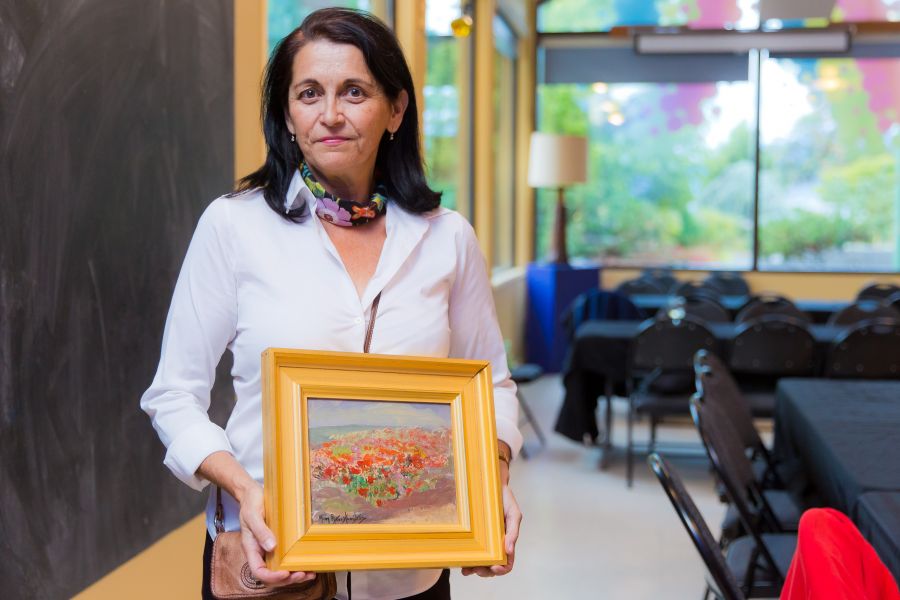 Steele says she also knew 12 more who never did make it home.

The first of Steele's two installations is a triptych of video footage she filmed during her time with the troops. "Some is from Afghanistan. You're going to hear ambient sounds and some of my poetry recited by professional actors So you're going to have immersion. Apparently, Paul's building a bunker to put it in." 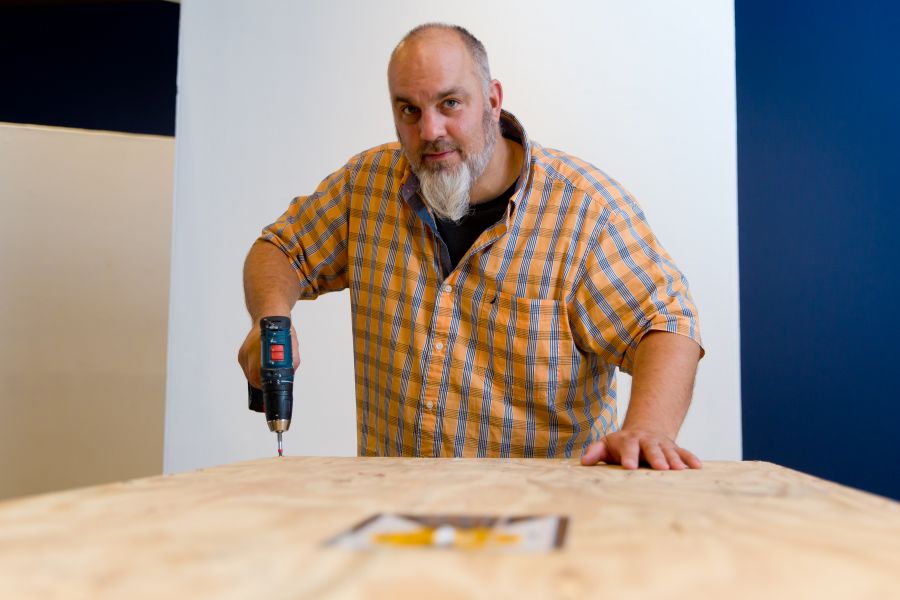 The second installation focuses on WWI battlefields. "I shot footage from the ground up, lying down on the ground, in the trenches, in the forest, so you'll get a chance to see what the soldier of that time did. It was a war fought hiding beneath the surface of the earth."

"People won't see stuff like this in many other places. I want to provoke thought." 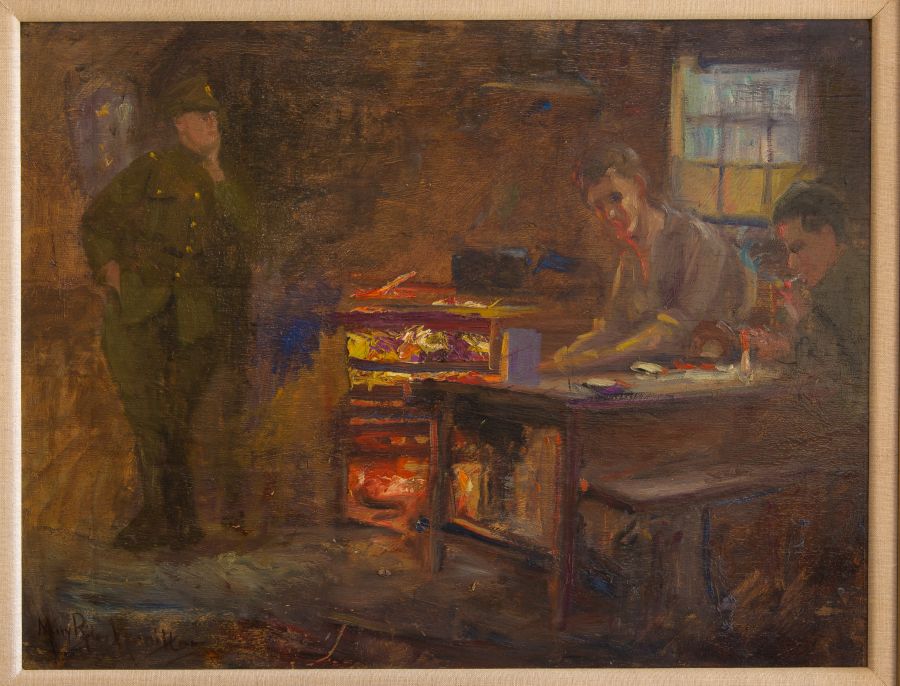 Crawford says Steele's show "will dovetail into our other show on Mary Riter Hamilton, who in 1919 went over to paint the battlefields on behalf of the War Amps of Canada. She died in 1953, penniless. But she made this incredible body of work that she donated entirely to the National Archives of Canada as a testament to the soldiers and the lives lost in World War I."

The opening reception for this fall's exhibitions runs this Friday, September 20, from 7 p.m. to 9 p.m. There's no admission charge, though donations are always welcome. Beer, wine and light snacks will be served. 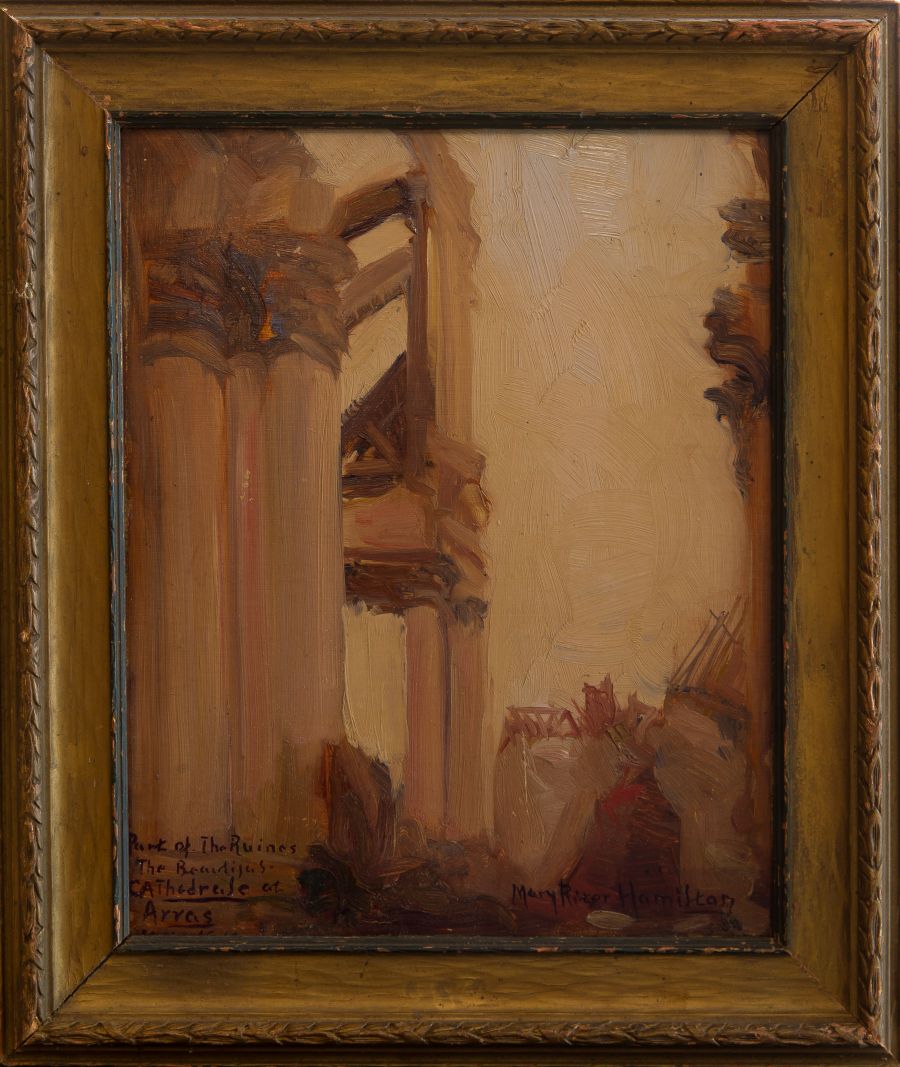 Dr. Steele will be on hand for the event, and will return the next day at 1 pm. for the gallery's artist's talk, curator's talk, and tour.