Today started real early for Revelstoke artist Kyle Thornley. Driving to Penticton a day earlier, Thornley arrived at the busy Front Street roundabout just before 7 am, bringing his truck and trailer rig with him. 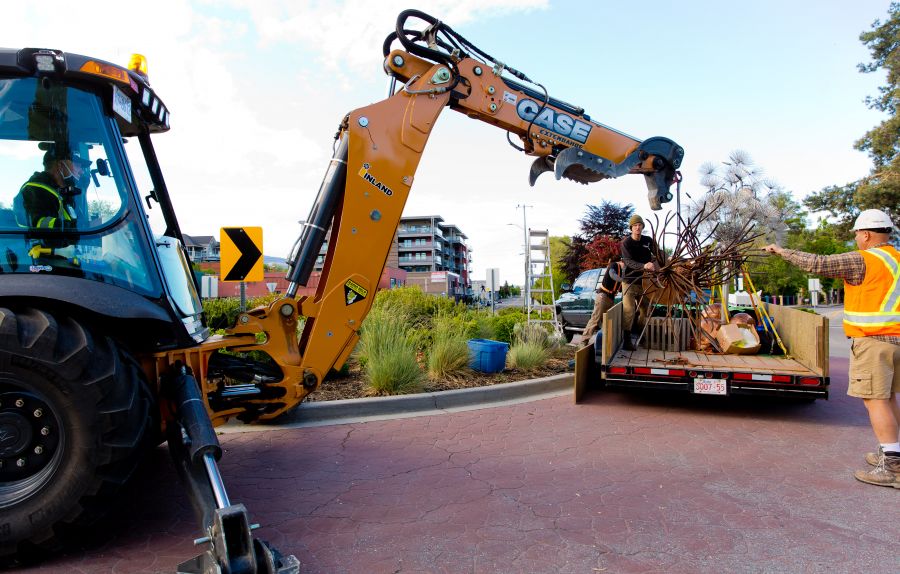 Such is the price to pay for capturing the premier position in the annual Penticton Public Sculpture Exhibit. Inside Thornley's trailer was his 2021 winning entry, a 13-foot-tall ode to nature known as "Ancient Wisdoms," and now he was busying himself loosening tie-downs and prepping for moving the thing into position. 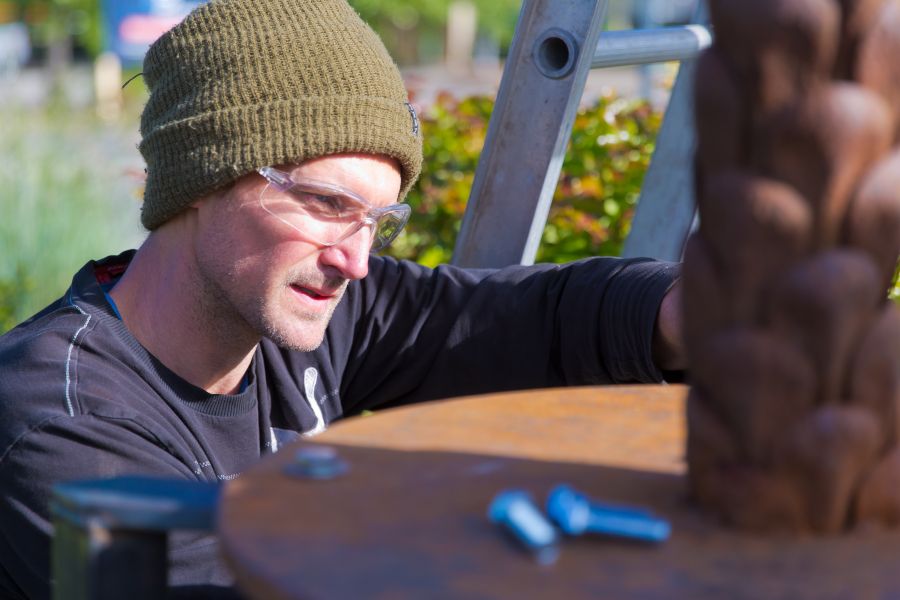 Within minutes, Exhibit program coordinator Kaare Yeske showed up in his even larger truck and trailer rig, hauling even more cargo. Then Yeske's son Shale, then City of Penticton public works dude Mike Stadnyk with his backhoe.

Soon, all four were grappling with the task of lifting the various chunks of Ancient Wisdoms from Thornley's trailer, piecing them together, then daintily placing the 900-pound finished product on a large cement pad in the centre of the roundabout. 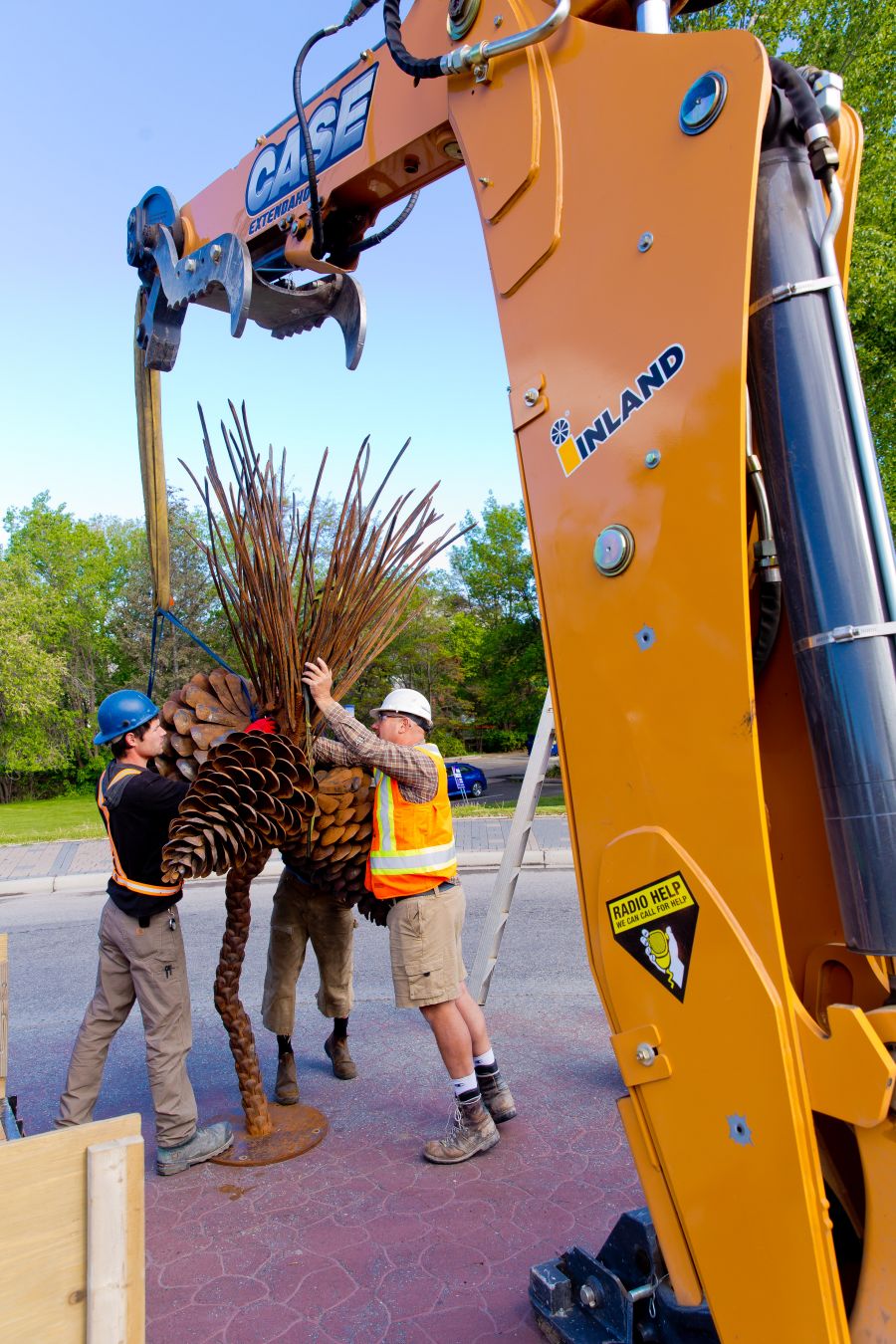 It was an impressive team effort. In just over 90 minutes the deed was done and Thornley was headed for Castlegar. And the Yeskes and super-skilled backhoe operator Stadnyk had shifted to the waterfront where they'd ultimately install a half dozen more winning entries. 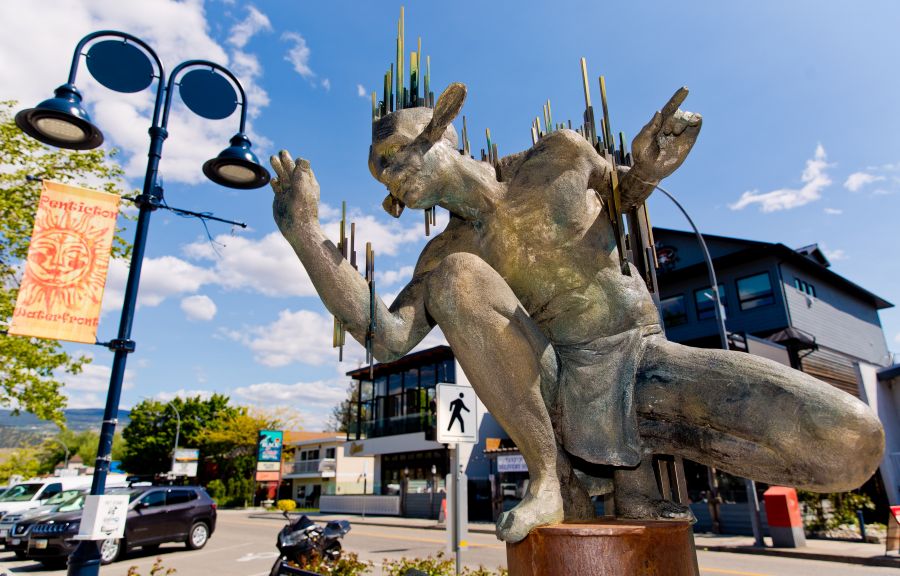 A day like today happens only once a year. And by the end of it, the northern shore of Penticton has a whole new set of top-level, regionally-created sculptures for residents and visitors alike to ogle, photograph, and sometimes just ponder. 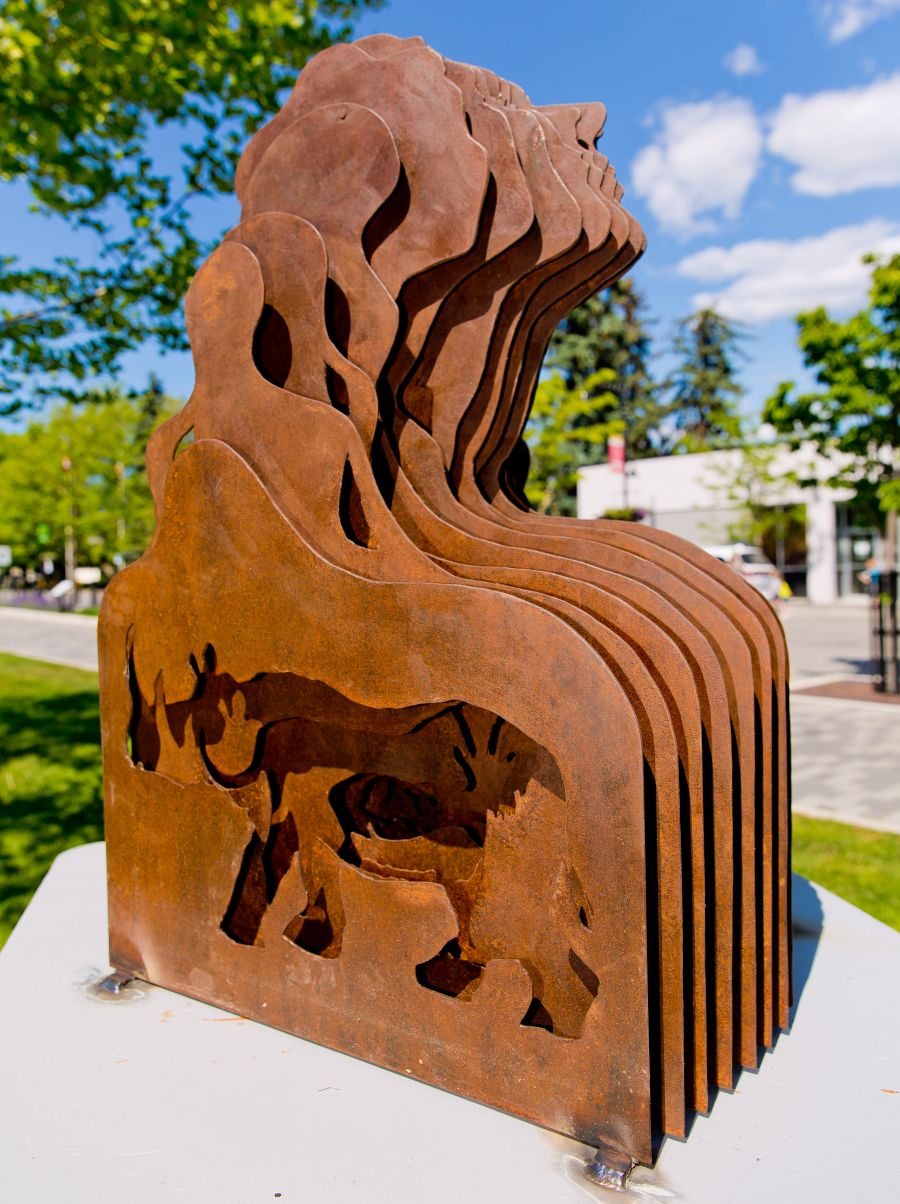 In Ancient Wisdoms, Thornley, an accomplished blacksmith who said he's only recently stepped into the realm of public art after selling privately for several years, adopted a familiar philosophy -- that of "taking nature and blowing it up to a big scale."

"It's a pine cone sculpture," he said, "touching on coniferous trees and their ancient history. How they protect, how they know when to release their seed, how they endure hardship. It's just an interesting take on natural elements." 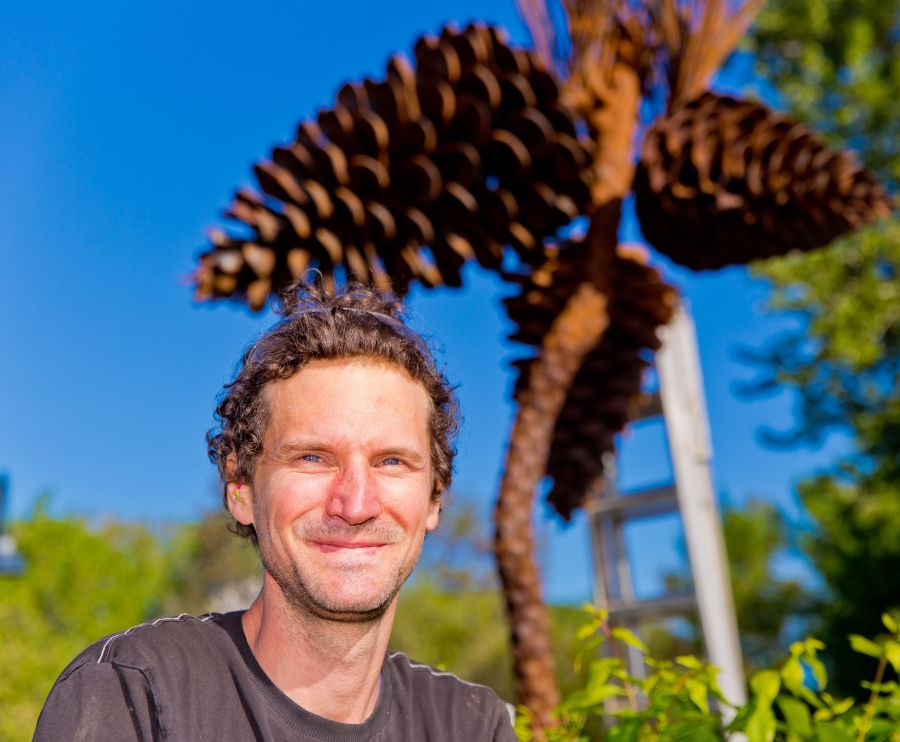 Each of the three massive pine cones -- the largest of which weighs 250 pounds -- are made of steel and built to rust. The more rust, the more they take on the look of real pine cones.

"But when they get to the appropriate level of rust," added Thornley, "I'll wax and clear coat them to lock it in." 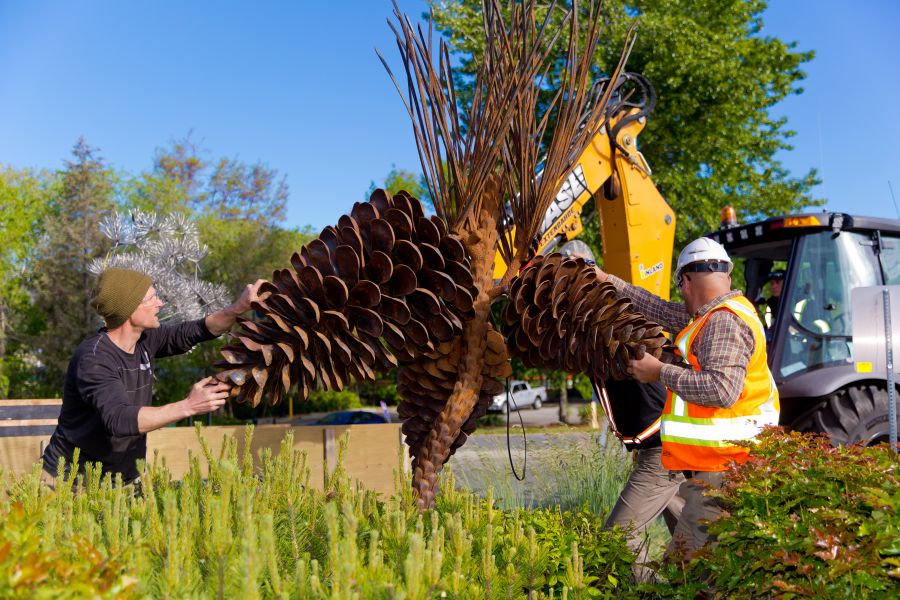 According to the artist, it took 220 hours of "actual work time" to create the piece.

"It's all hot work, hot forming," he said. "It's traditional blacksmithing techniques, then I have some power hammer machinery to give extra muscle for moving the material around."

And he's psyched to have it in Penticton. 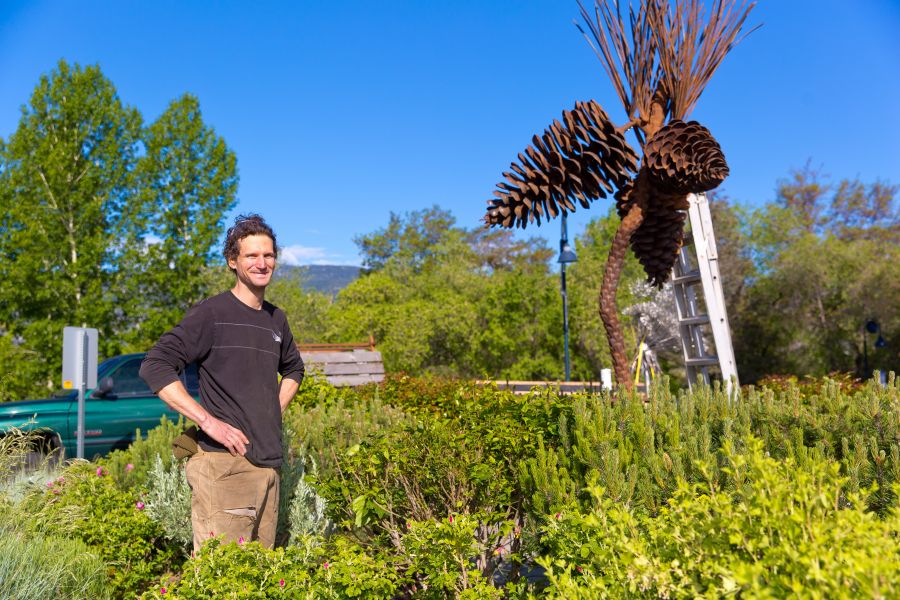 "I'm feeling confident with my work. I just got a Saskatoon sculpture. Last year I got one in Texas, and I just got another in Kitchener. It's definitely a pat on the back and I hope the city enjoys it."

Also on hand was Robin Robertson, the Exhibit's visionary and now its advisor. Robertson was thrilled with the new roundabout installation, saying, "It's a natural. It just feels like it should be here." 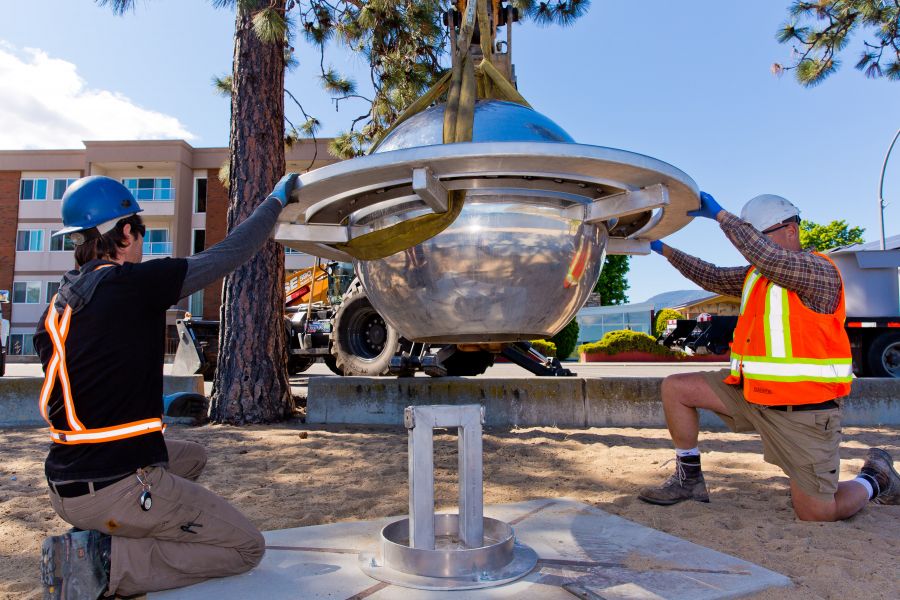 "And we're growing the program this year," she added. "We have one more sculpture and an amazing app that the City put together.

"There'll be QR codes on all the signage so people can take a picture with their phone and it'll immediately take them to the website and tell them all about the piece they're standing in front of." 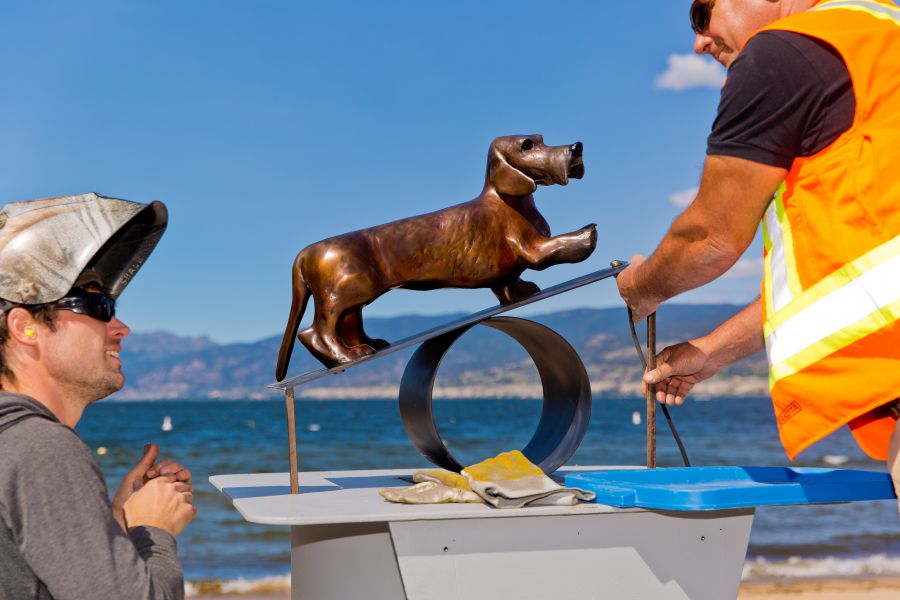 "I think it might put me out of work as a sculpture guide," she laughed.

We soon reconnected with the crew on the waterfront, where their first order of business was installing an all-marble polar bear created by returning artist Denis Kleine. It's called "Northern Hunter," and it's gorgeous. 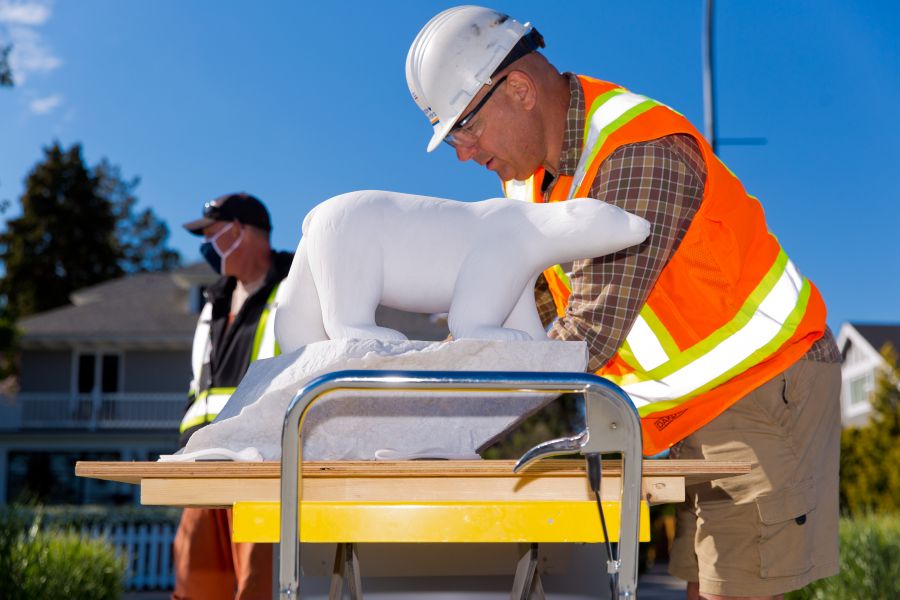 Gorgeous enough that it immediately attracted the attention of numerous passers-by, who all expressed their love for the revolving annual sculpture concept.

One such passer-by was local resident Rob Smith, who couldn’t resist chatting with us. 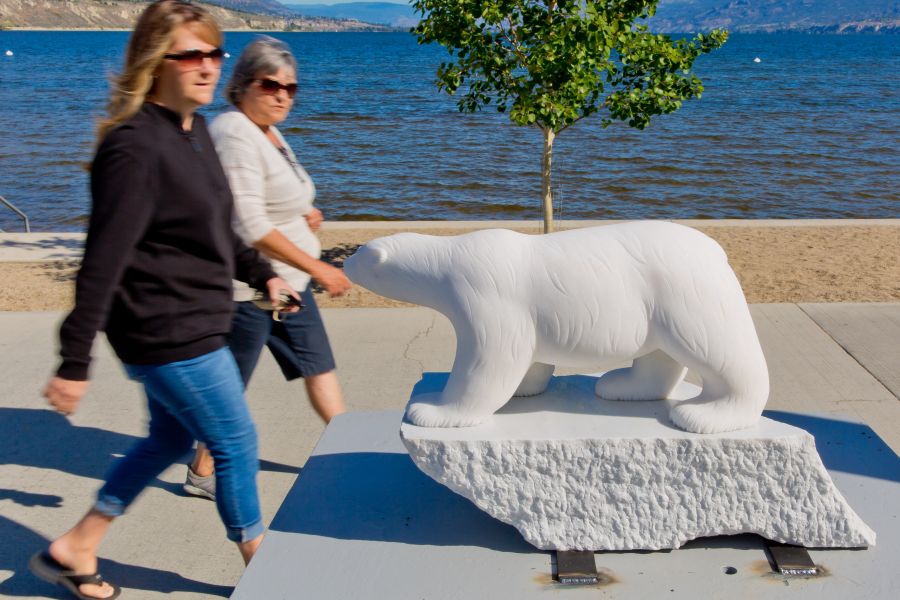 "I just love when you walk along the water area and you have artists from all over the province showcasing their talents," he said.

"It's part of who we are in BC, and it gives the waterfront a little panache. It shows we care. Culturally, I feel it's important that we maintain that." 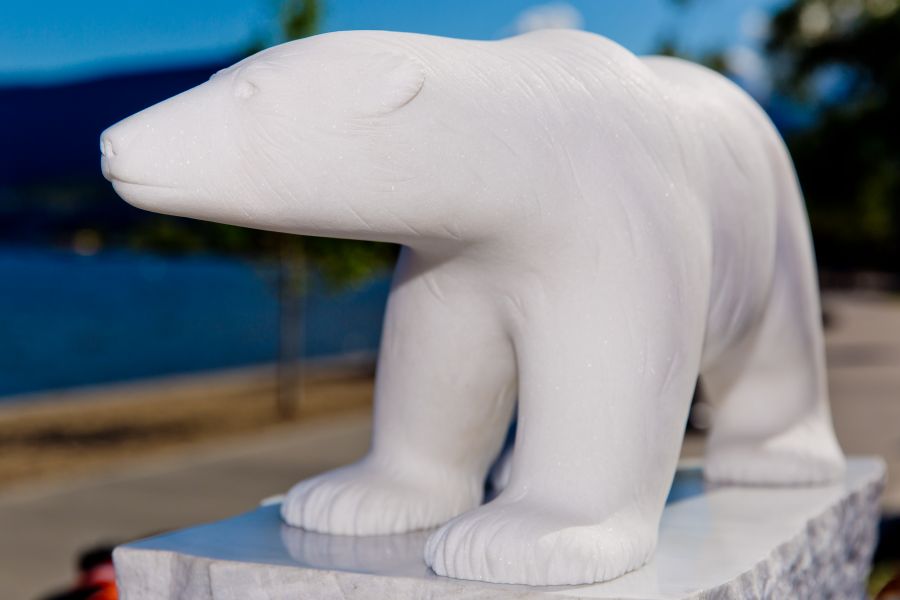 Next up was a fully interactive work called "Saturn Bench." Fashioned by Lethbridge-based sculptor Andy Davies, the piece is a large and literally reflective look at the planet Saturn, complete with rings. 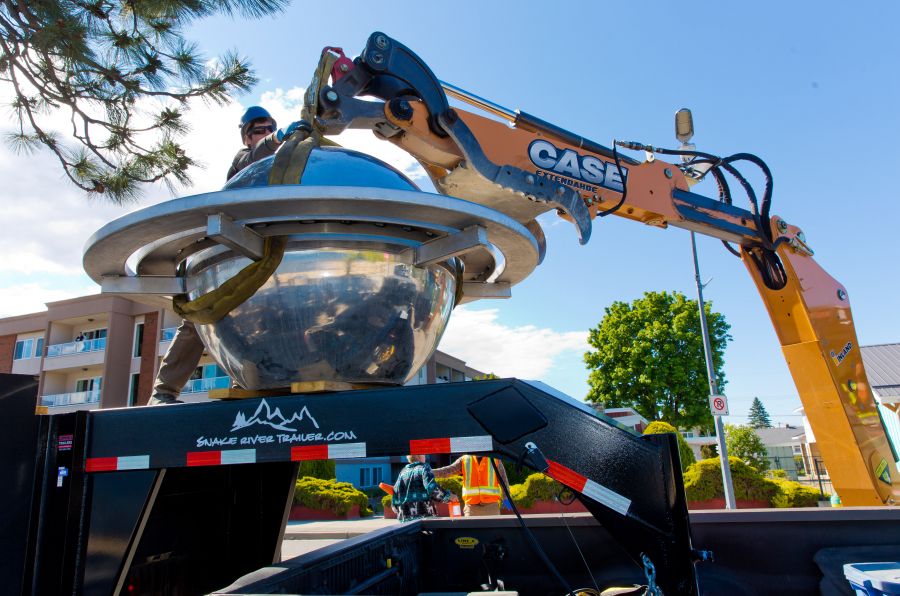 But here's the cool part. The rings serve as a perfectly functional public bench.

Yep, you get to sit on the rings of Saturn. 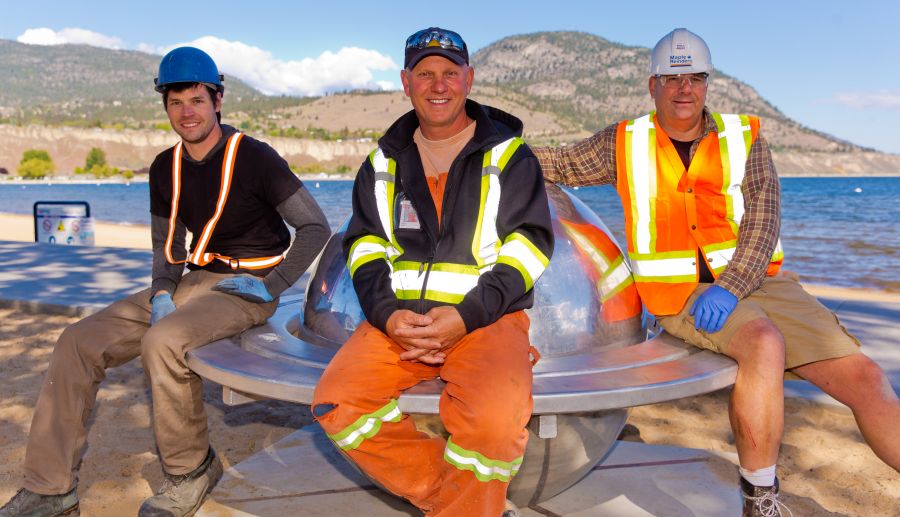 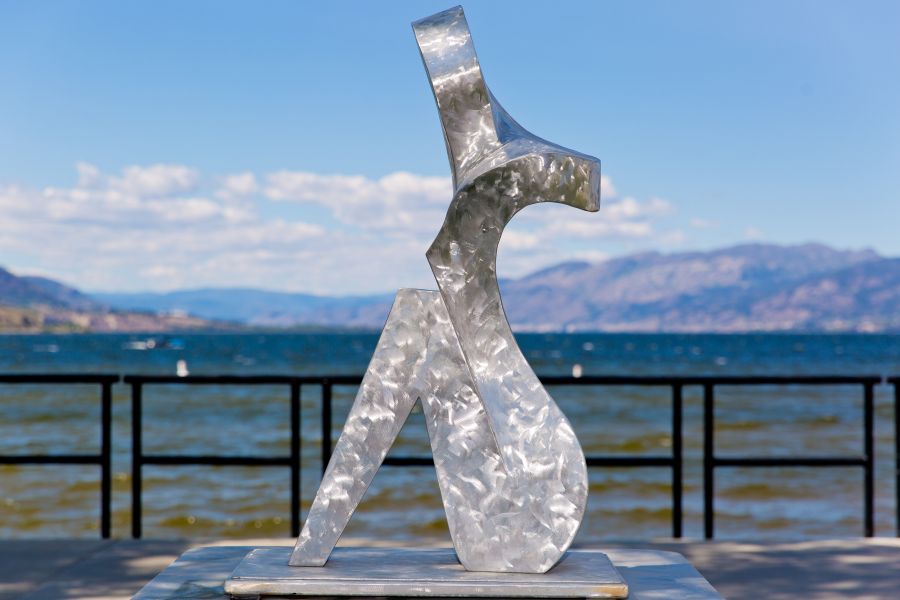 In the end, there were the expected hassles to Sculpture Install Day. Some didn't mount as easily as others. Some demanded more grinding and welding and power tool usage than was planned. But they're all up now, and they'll remain that way 'til spring of 2022. 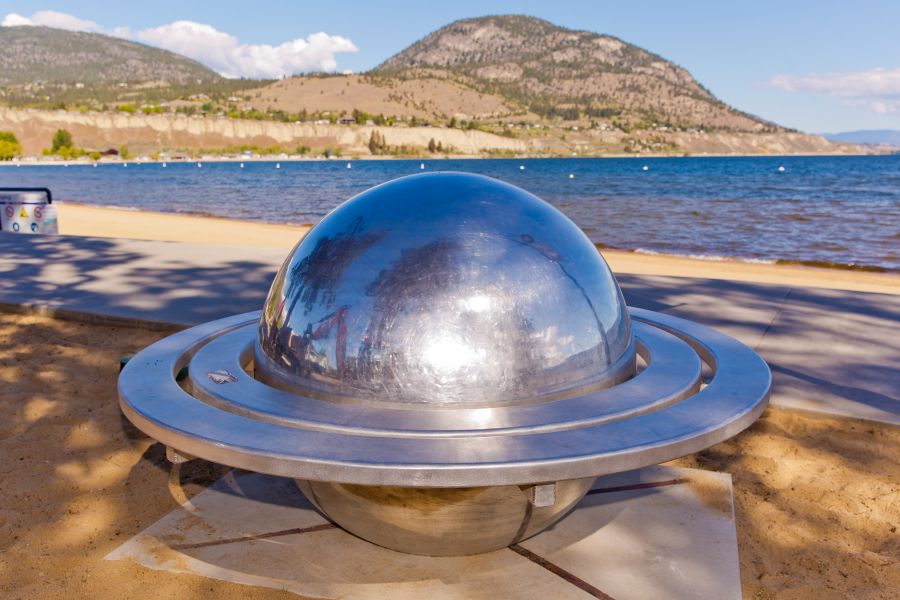 And Penticton's a better place for it. 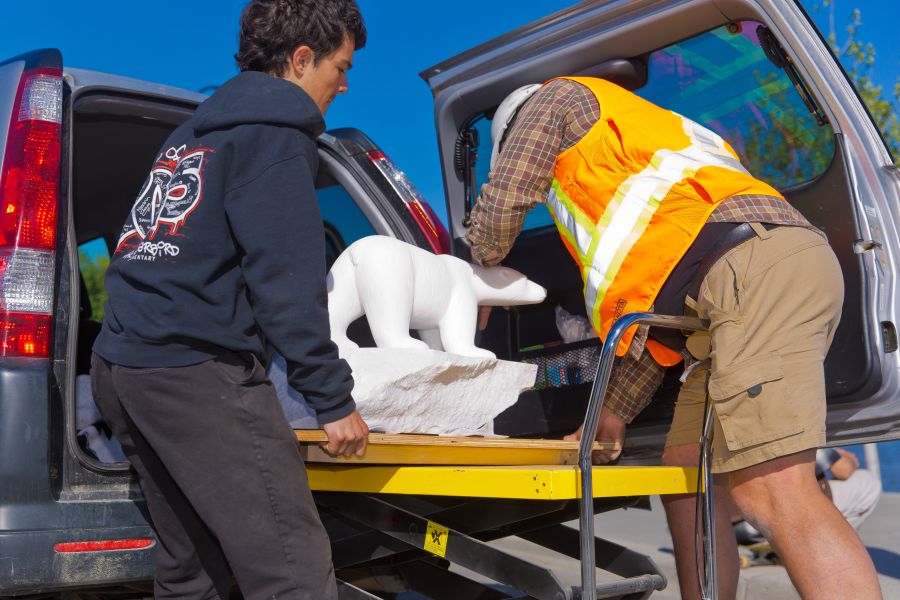 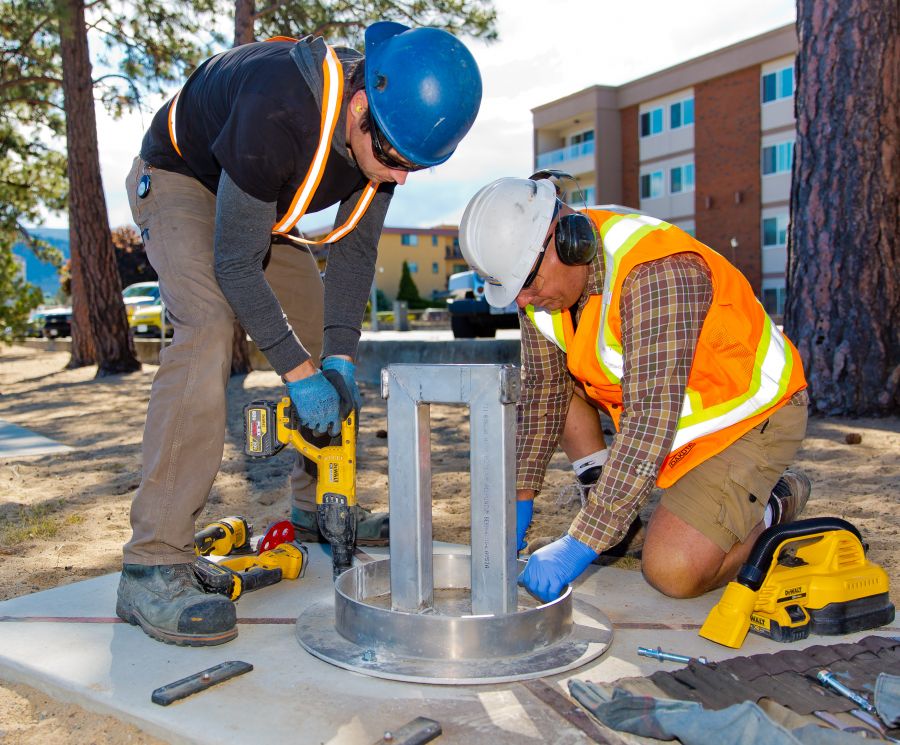