There were dozens of giant candy canes, a half-dozen or so activity tents, three food trucks, an outdoor skating rink that wasn't yet set up but was used anyway, an eight-foot tall fully-illuminated cannabis shop humanoid mascot, a pair of Clauses, one extremely popular fire pit, and, after 6:30, a Christmas tree. 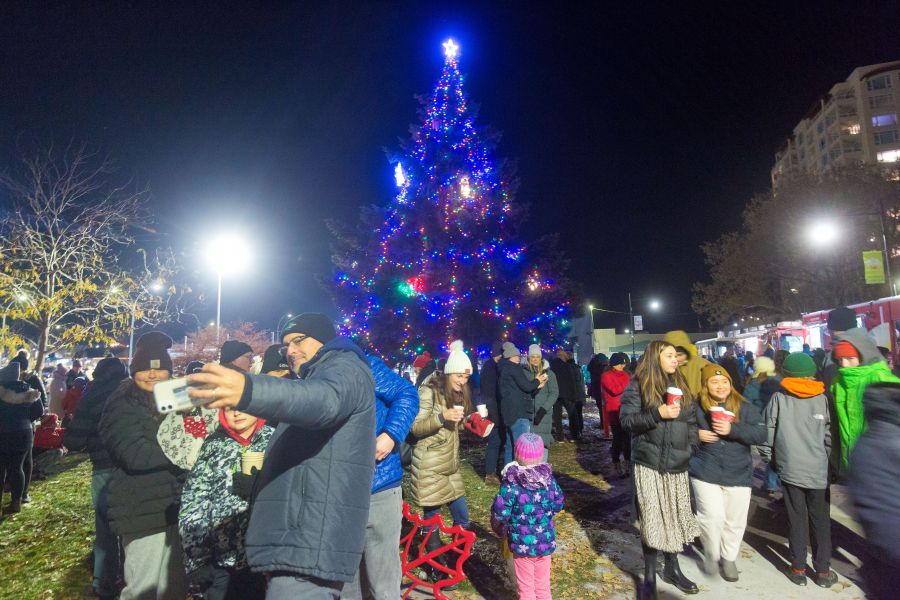 It was the 2022 Downtown Light Up Festival, unfolding Saturday night in its brand new location, tucked between City Hall and Gyro Park, adjacent to Penticton's (still unnamed) outdoor skating rink. 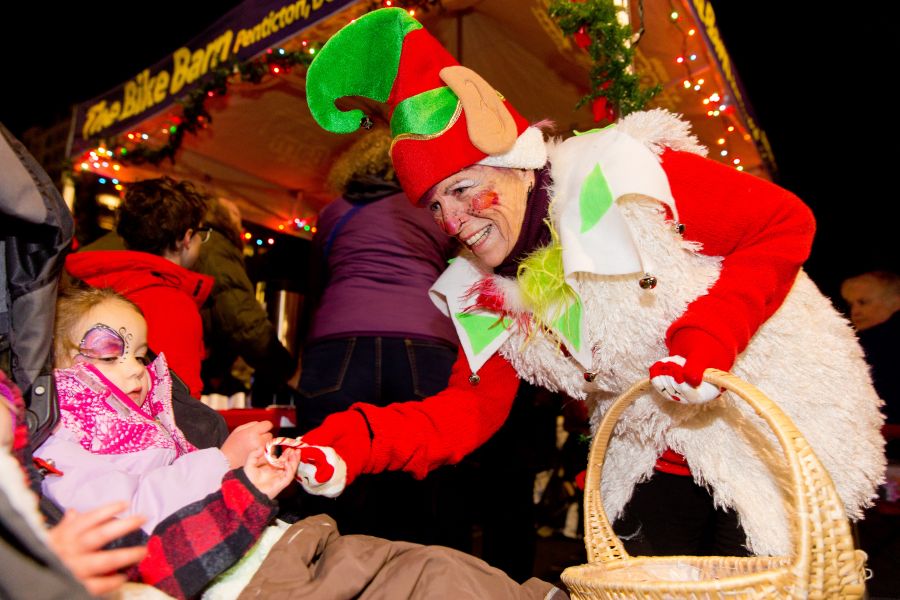 Given its new location, the super-cold temps of Saturday evening, and a COVID-inspired absence of nearly three years, the event had every reason to be messy. 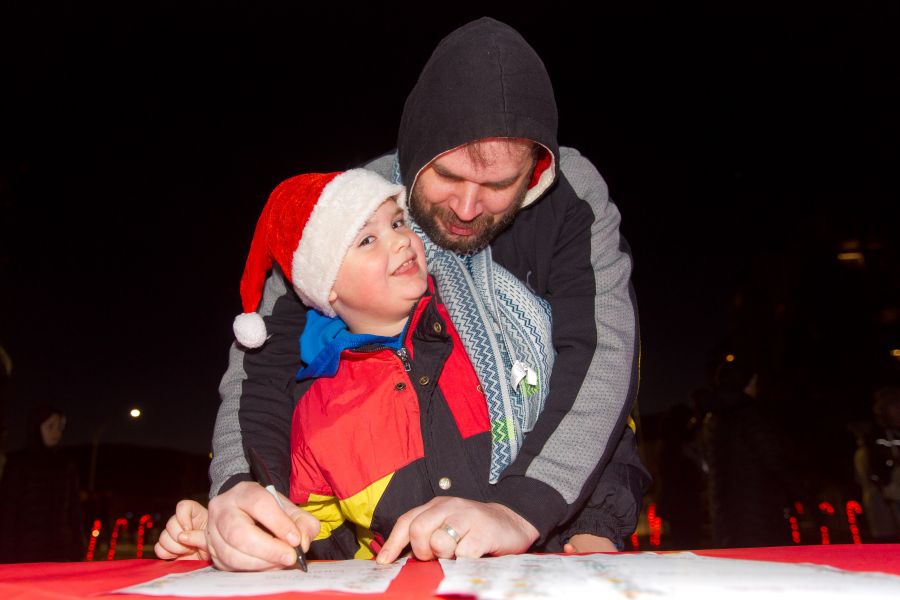 But it wasn't. The live music was a bit loud and unseasonal, the next-door rink wasn't set up like organizers initially thought it might be, and the actual tree light-up was shifted from 7 pm to 6:30 to accommodate those who felt the temperatures were a bit tough to take. 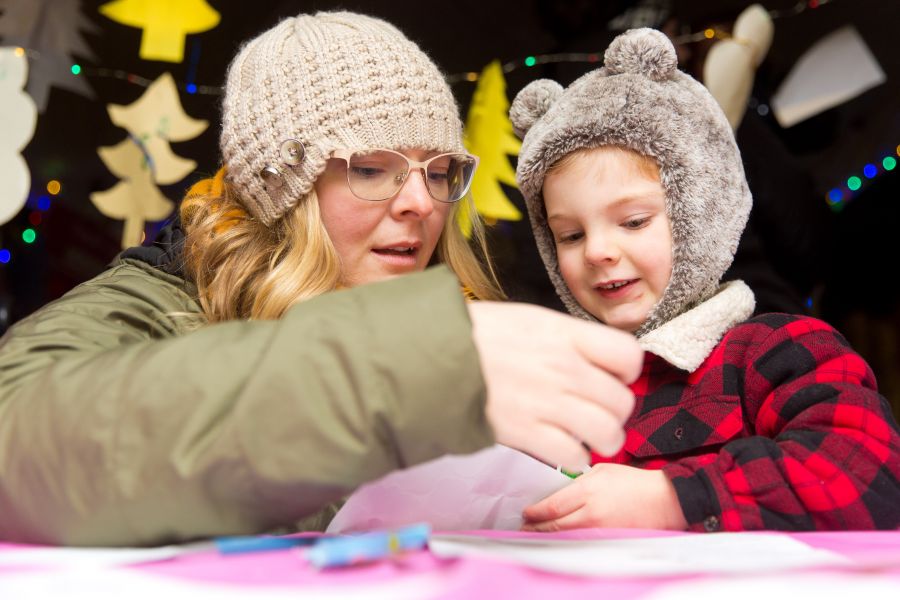 Otherwise, there was a lot to like, including the crowd size. Granted, this was no Summerland Light-Up (which takes place next weekend, FYI, and attracts upwards of 8,000 people), but hundreds of folks did show up, effectively jamming the smallish event space. 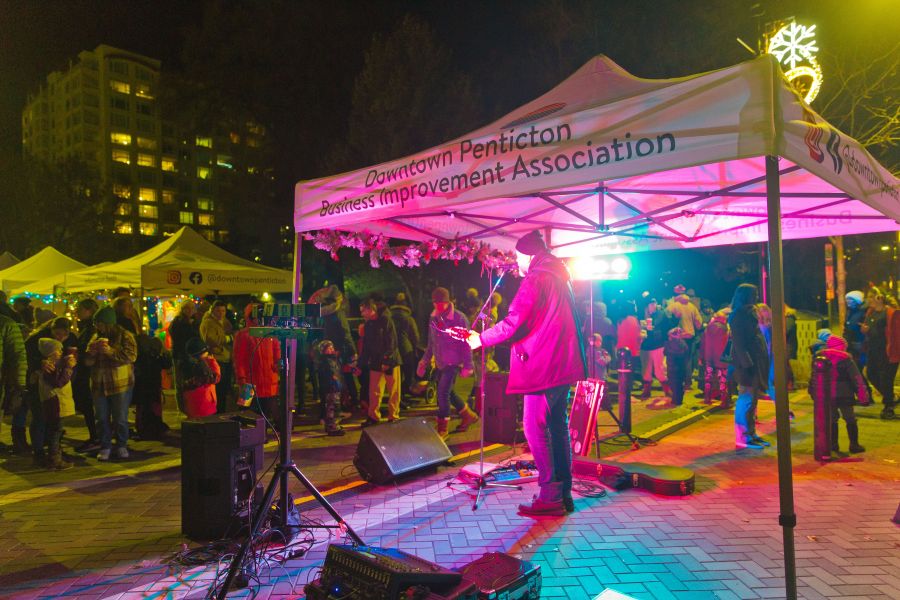 Undoubtedly the most popular attractions of the evening were Mr. and Ms. Claus, who handled the pressure patiently and attentively as seemingly every person in town lined up for photos. 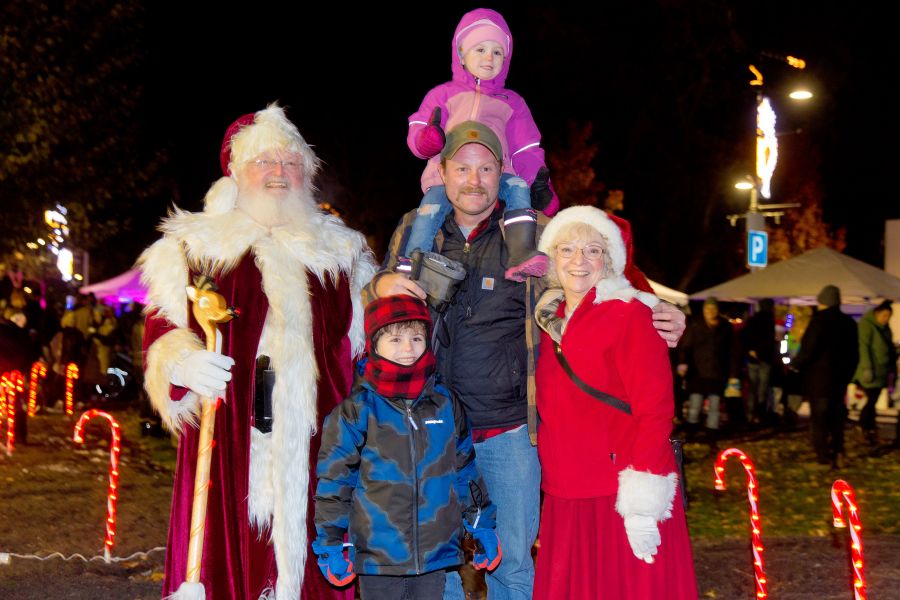 The Canada Post tent was almost as trendy, with a steady stream of parents and kids wading in to write and mail letters to the North Pole. 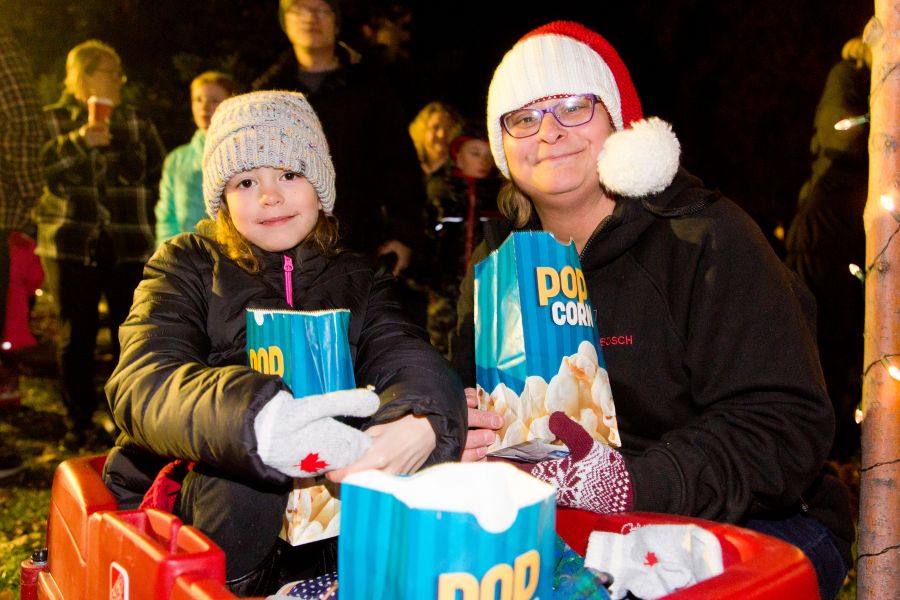 Business at the food trucks seemed solid all night, but we liked the Seniors Drop-In tent, mainly for the freebie hot chocolate and pleasant servers. 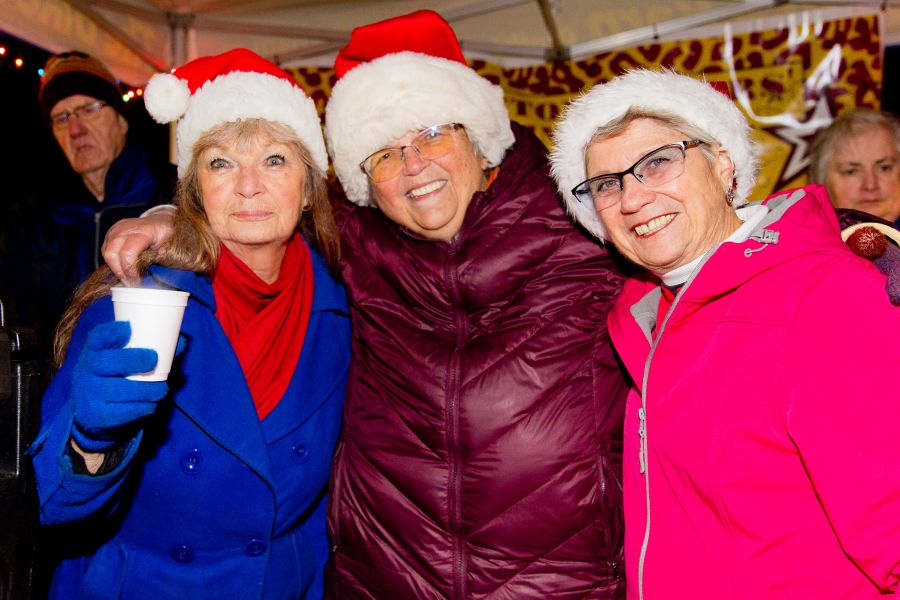 And the rink, despite being without artificial ice but coated in a natural snow/ice mish-mash, was active throughout with snowman-makers and the like. 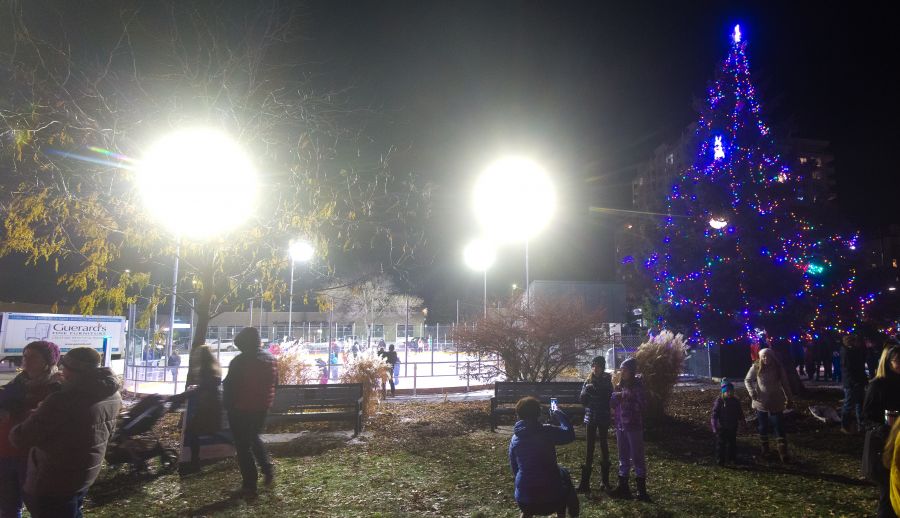 Halfway through the evening, the word was given. Due to the temperature, the official "light up" of the cedar tree next to the rink would be moved to 6:30 from 7. Not long after that, the eight-foot-tall Unity Cannabis "mascot" showed up, attracting lots of attention as he/it strolled about.

And then, just after 6:30, the tree was lit. It wasn't exactly loaded with bulbs, but everyone cheered anyway and broke out their camera phones for selfies.

Amber Belcout, communications and promotions manager with organizing body Downtown Penticton BIA, said she was "thrilled" with the turnout. 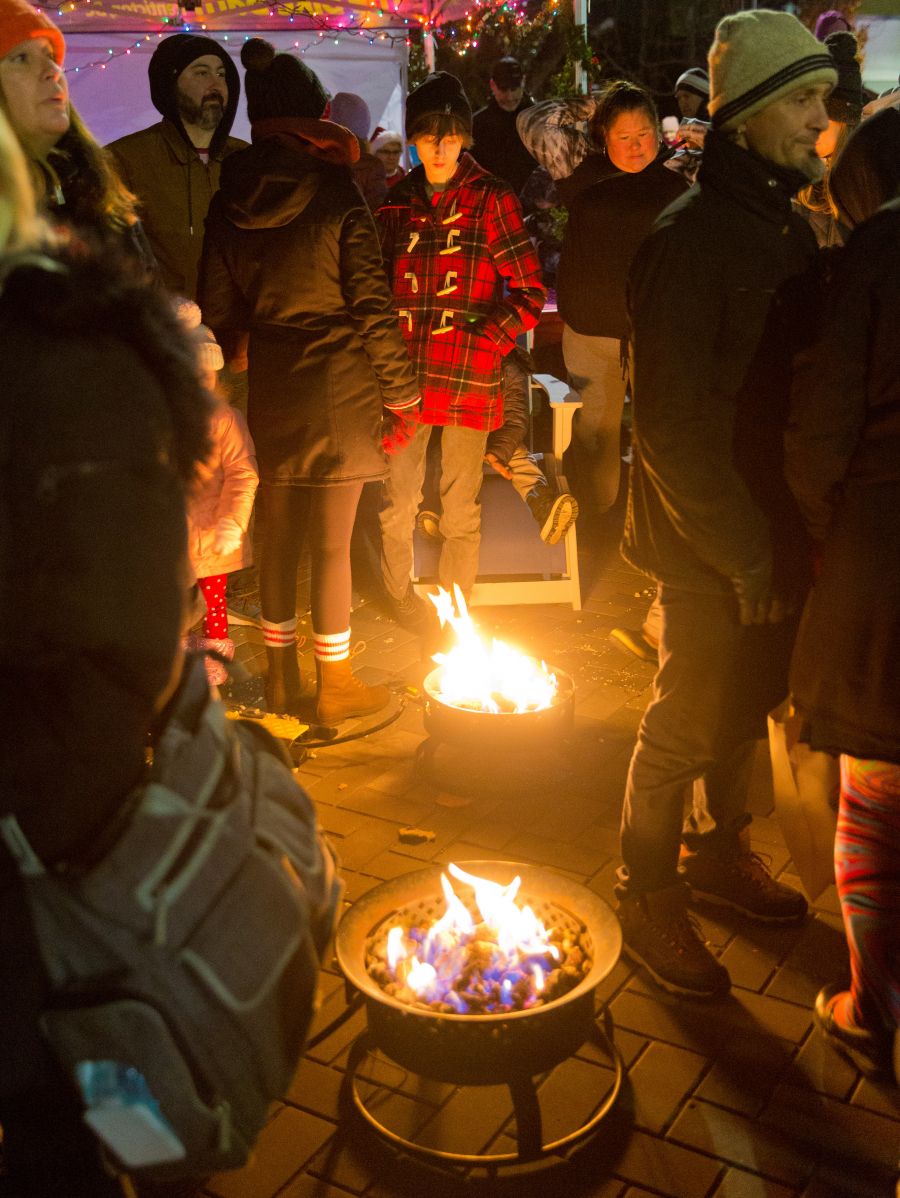 "There were hundreds of people here," she said afterward. "It was good to see all the children running around with smiles on their faces, being able to enjoy the festivities."

"We chose this new location to try a new space and to incorporate City Hall, which was also lit up at the same time. We're also adjacent to the new rink, and it was easy to bring in food trucks." 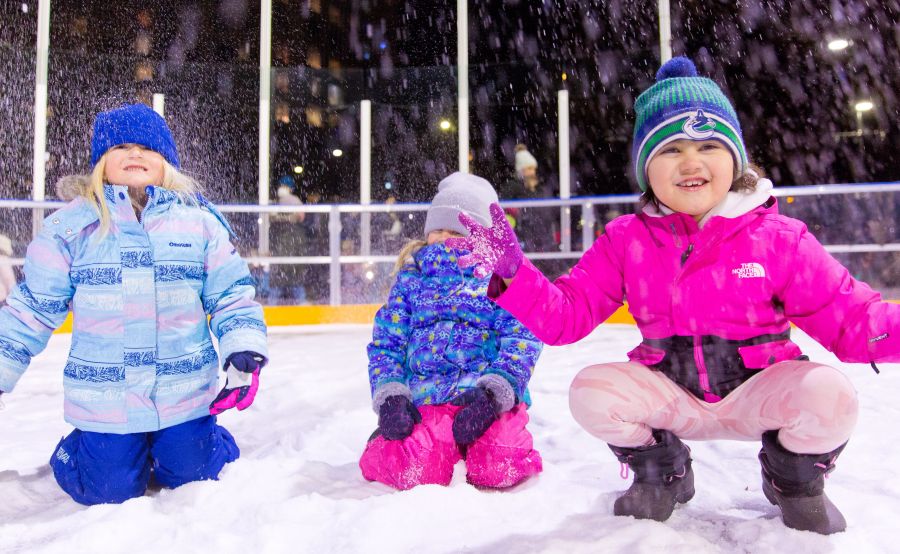 According to Belcourt, there's a "great possibility" that next year's event will be situated in the same spot, only this time with "enhanced" activities and "even more lights" on the tree. Indeed, she hopes the Light Up will eventually grow enough that it might be shifted a few meters north into Gyro Park. 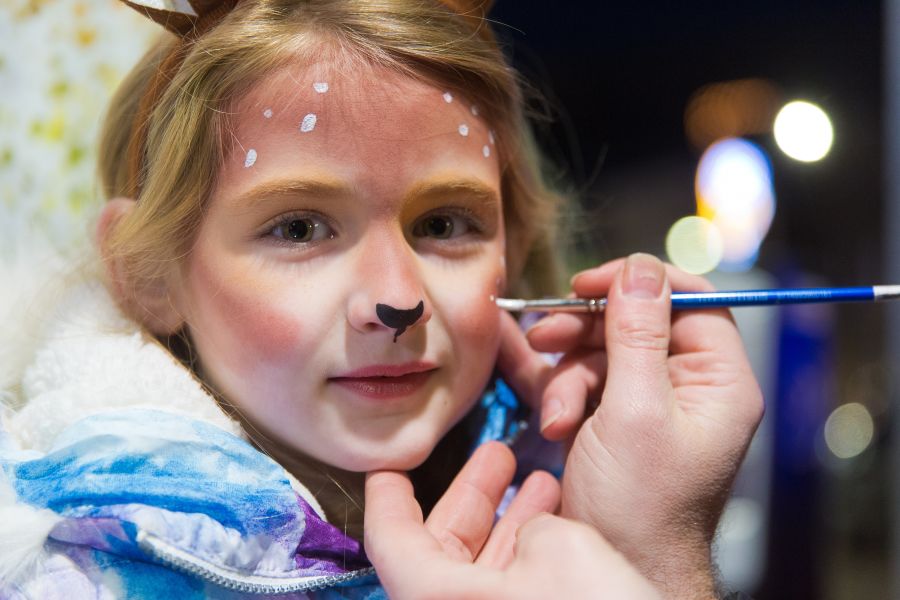 By 7 pm the crowd had dissipated. But the illuminated tree was still there, as it is now and will continue to be to the end of the year.