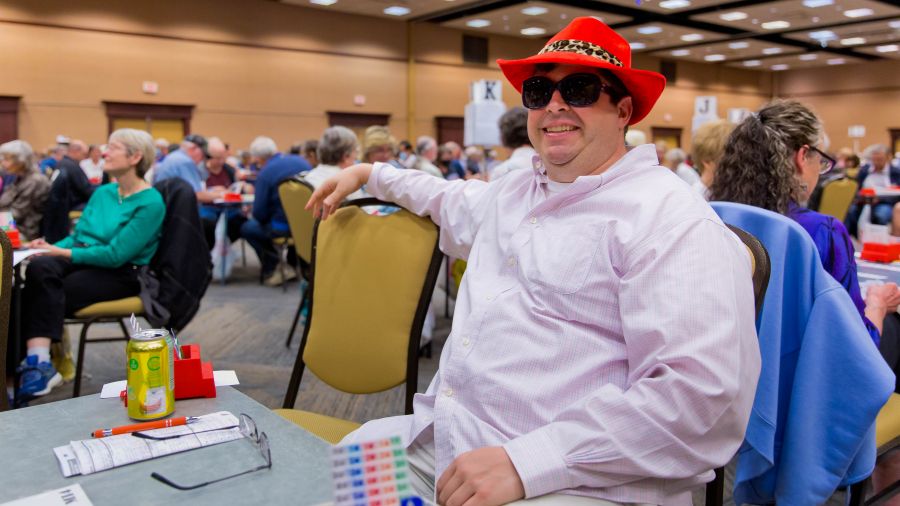 Instead, he makes his living by being a hired gun -- taking payment from generally well-heeled individuals who want him on their team to help them learn and help them win amateur events. 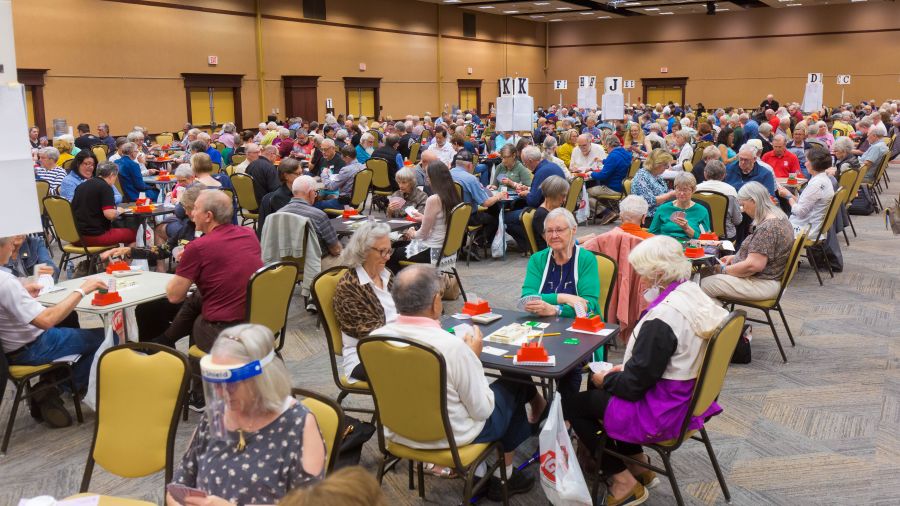 Last week, Morgan, with girlfriend Marie-France Benoit of Ottawa, came to Penticton and dropped fairly big bucks on lodging, food and drink while here. All to see the area for the very first time and play in the annual Peach City Bridge Tournament.

Morgan and Benoit are not alone. Hundreds of bridge players from across the province, the country and the continent are drawn to Penticton every year by the tournament, a seven-day affair held at the Trade and Convention Centre. 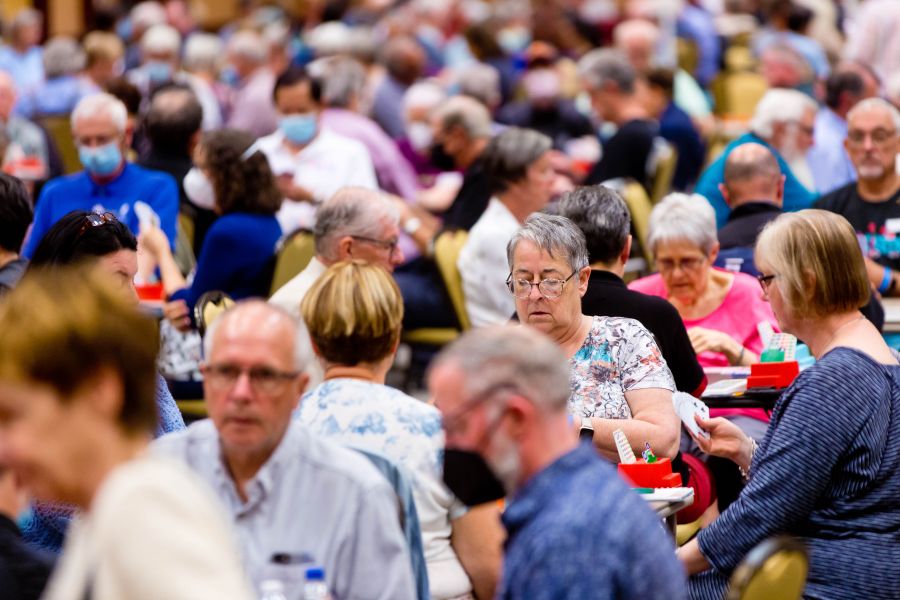 In the pre-COVID days of 2019, says 17-year tournament organizer Marv Norden, 1500 players attended the event, the vast majority -- at least 90% according to Norden -- from out of town.

Amazingly, that made the Penticton stop the third largest bridge tourney in North America in 2019, behind only Gatlinburg, Tennessee (the long acknowledged bridge capitol of the USA) and Palm Springs. It was second largest the year before that. 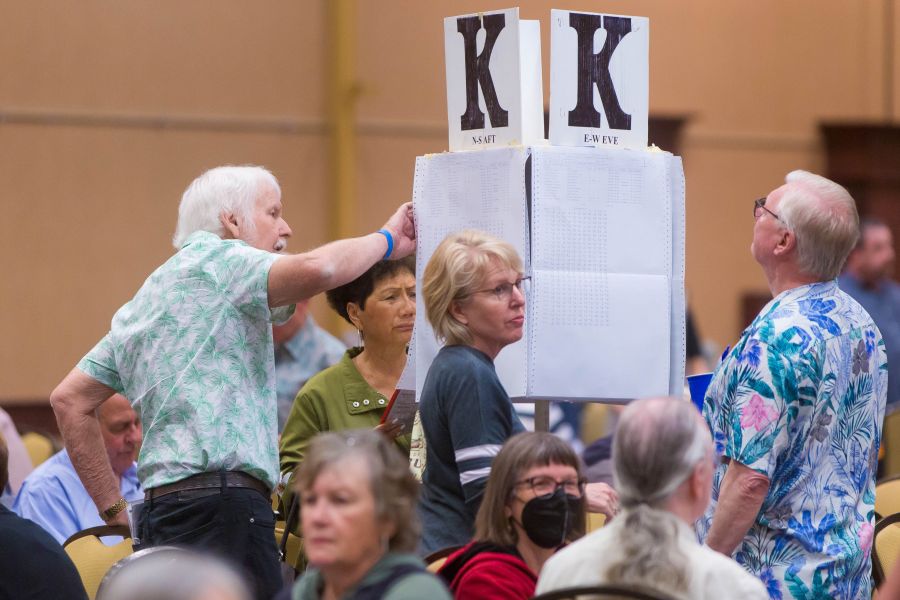 Granted, total attendees dropped to approximately 800 this year as the world recovers from COVID, but pandemic potholes are not uncommon. So our prime question remained. What makes a bridge tourney in smallish Penticton such a big attraction when there are similar events, many in larger population centres, all over North America?

Turns out it's a lot of things. 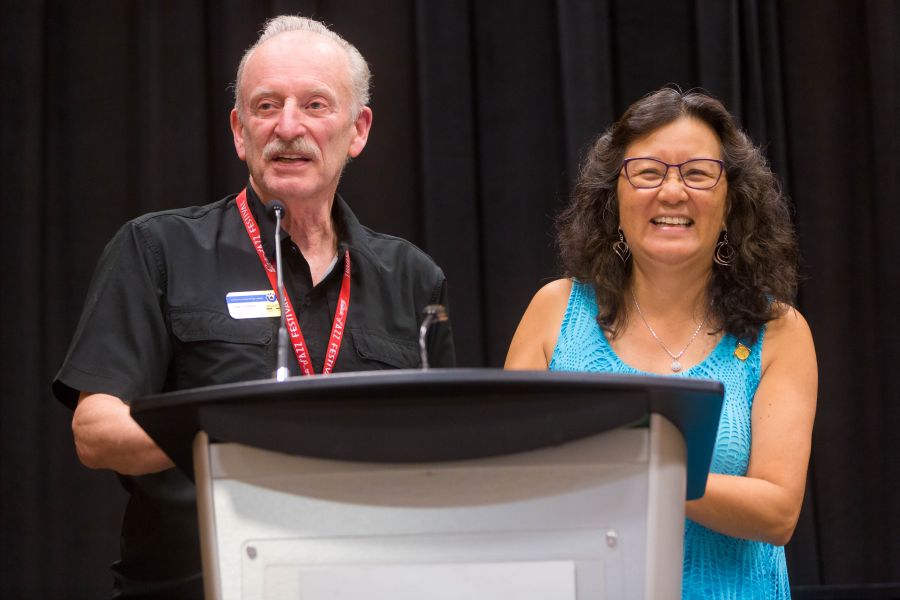 "It's a fantastic geographical area," said Norden. "It's wine country, it's a small town and there are no parking problems. And we have about ten million people within an easy day's drive.

"Really, it's a destination tournament. Rather than just going to play bridge, we have people coming with their spouses who don't play bridge, so they go golfing or wine touring or whatever."

We asked pro player Morgan and partner Benoit, who'd heard for years about Penticton and the tourney, the same question. 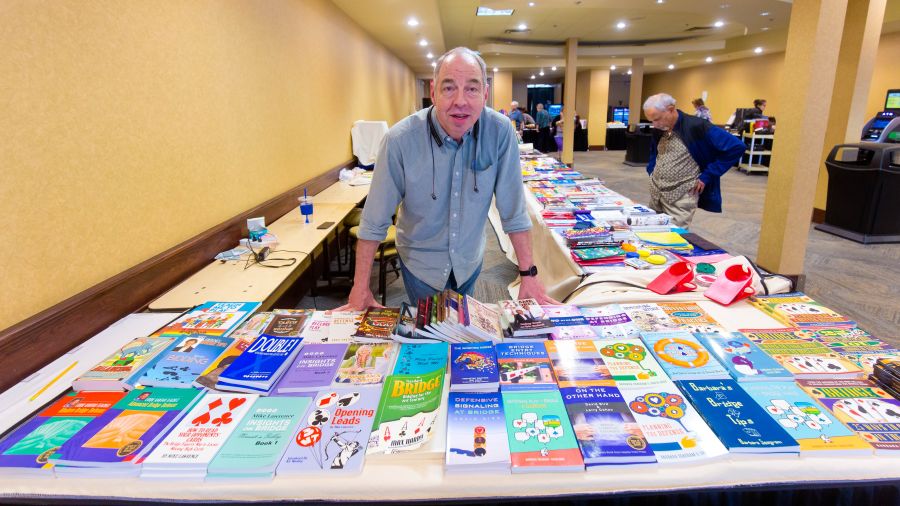 "Everyone says this is Canada's Gatlinburg," said Benoit. "But this is much better. Better food, better area, better wine. That why it's a big draw. The food, the wine, the hospitality."

"It's been great here," added Morgan. "The combination of mountains and the lake (we told him there are two, one on either side of the city) and the scenery is just exceptional.

"And the tourney is doing great. It might be down from its peak, but it's very encouraging to see the number of people who've come out." 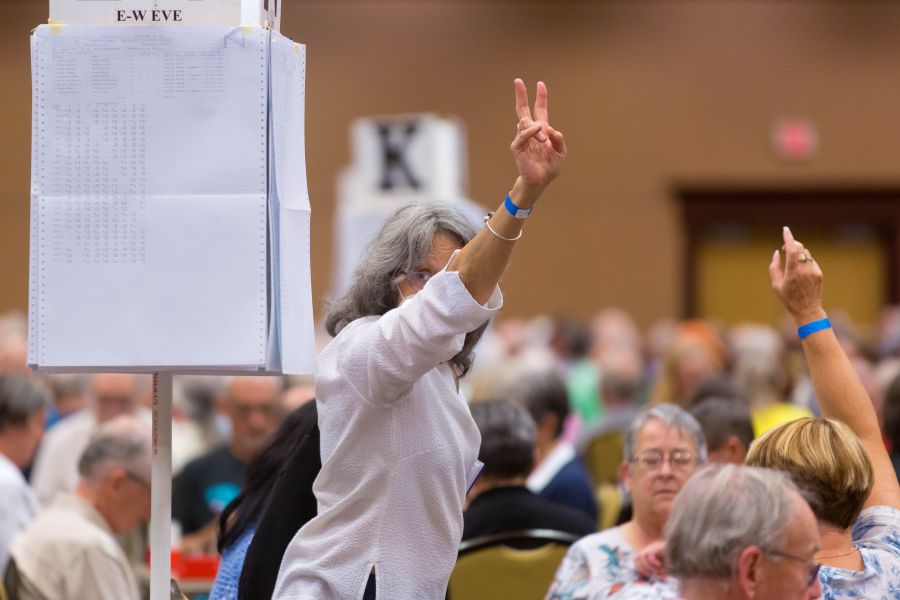 Ian Gibson of Naramata, a fervent player of the game and member of the Penticton Bridge Club, sees the Peach City Tournament popularity as a product of nurturing.

"It's built up over the years," he said. "It's now Canada's largest tournament of its type. People seem to like the good restaurants, the cheap motels along the water. People in BC and Alberta and Washington mostly drive here. Even from California. 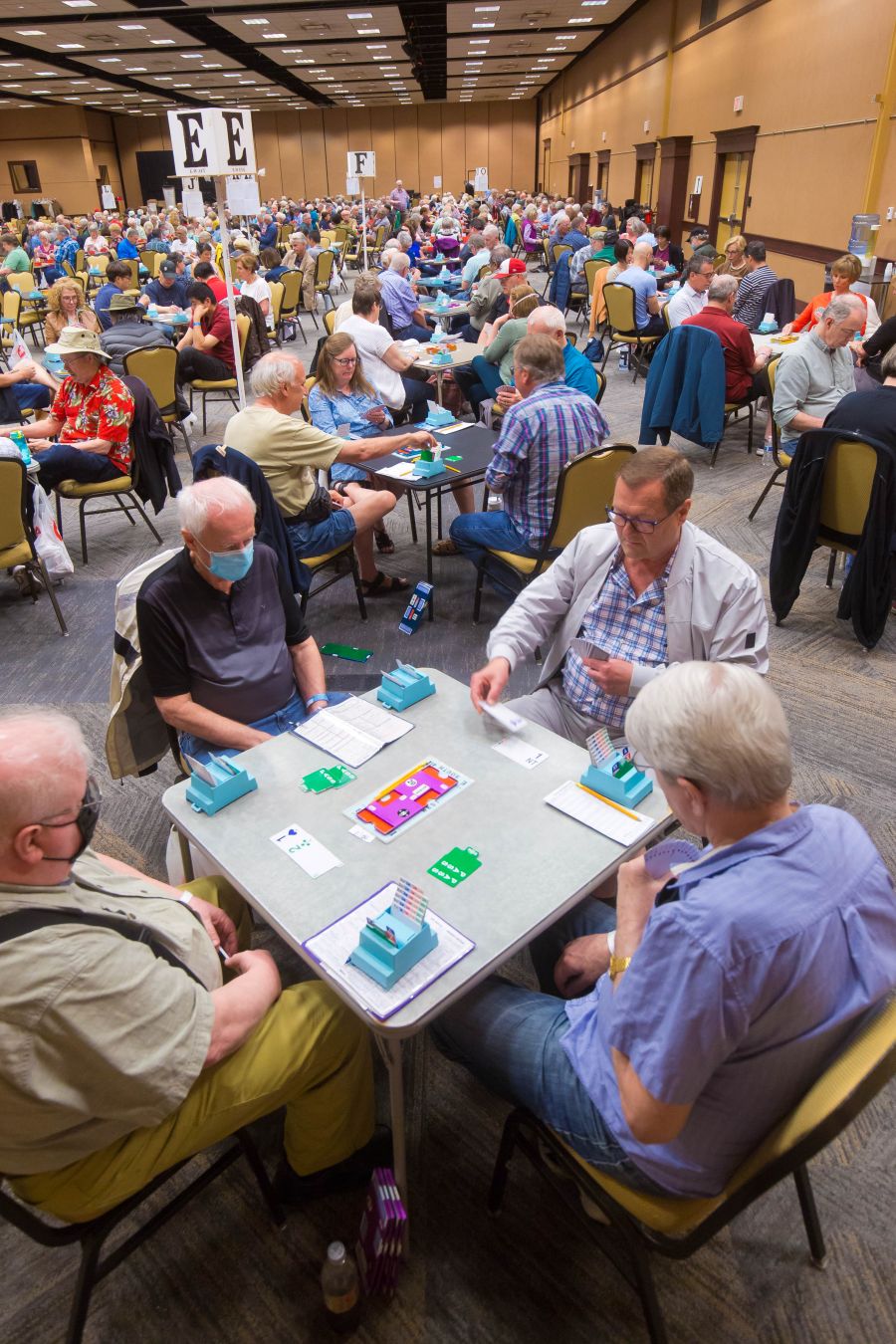 Later, we chatted with a group of three BC-based players (two from Prince George, one from Penticton) who tried their level best to give this reporter a crash course on a game that many believe ranks right up there with chess in terms of complexity/difficulty.

Perhaps our blank stare was a clue, but the lesson soon ended amicably and we bid adieu to our well-intentioned trio -- including a mathematics teacher and a lawyer.

By 3 pm, the Convention Centre ballroom had packed up for the afternoon session. It wouldn’t fill this time because we'd arrived on a Saturday after many competitors had already departed. Still, even 500 bridge players look rather impressive when seated all comfy cozy. 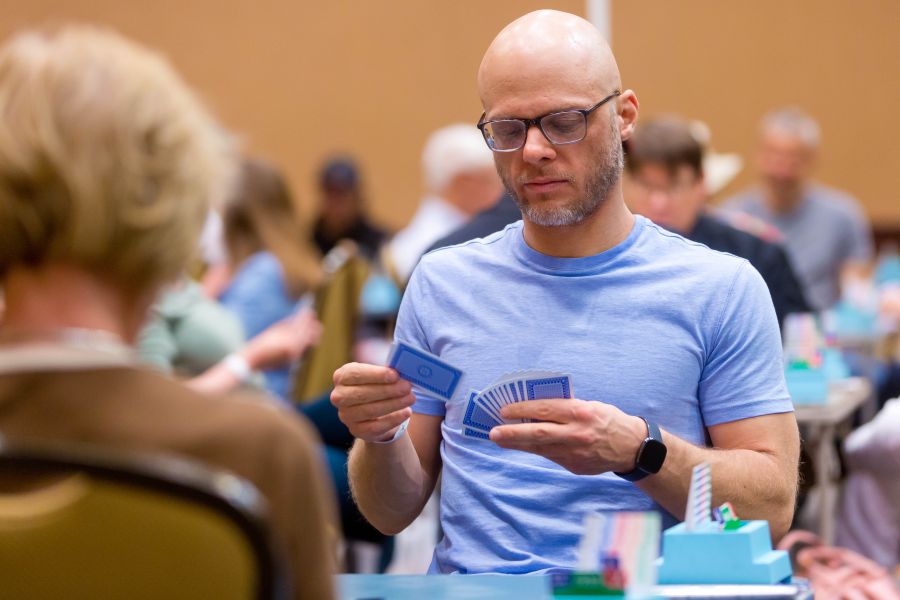 Going forward, coordinator Norden wants to grow the thing. In fact, he believes the City should realize what they have in the Peach City event and act accordingly.

"According to the ACBL (the American Contract Bridge League), bridge members book more hotel rooms than any other organization in North America," he said. "Bar none.

"So we have an impact here in Penticton, and we want the City to be more aware of what we do. Ironman gets $100,000 from the City, and they pump about four million in. We pump two million into the city, so how much should we get? 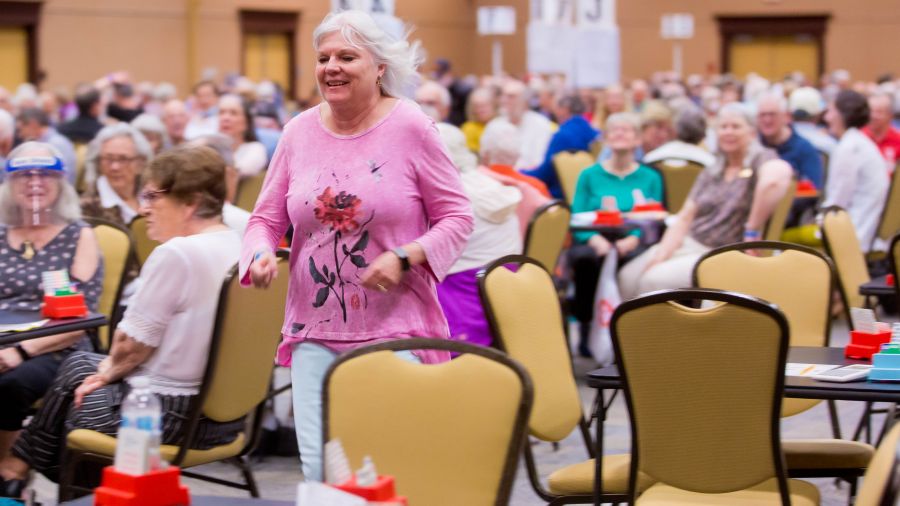 "Up to this year, we got nothing. And we got $5,000 this year. So it's time to make a presentation to the City and make them aware of how important we are."

For more information on the tournament, email Marv Norden at [email protected]