Snowbirds return to Kelowna this weekend after 8 years

What better way to spend the Kelowna Internationals Airport's (YLW) 75th anniversary than watching the Canadian Forces Snowbirds fly over the city.

Head on down to the lake this weekend, as the CF Snowbirds will be putting on a spectacular performance over Okanagan Lake on July 9 and 10 at 1 pm.

The military aerobatics flight team last performed in the Central Okanagan back in July of 2014, so after eight years this performance isn’t one to miss.

“We have not seen Canada’s elite Canadian Forces pilots here for years, but they will be here to help us mark Kelowna International Airport’s 75th Anniversary,” says Kelowna Mayor Colin Basran.

“This commitment to our city reflects YLW’s status as one of the top airports in Canada and our city’s history as an aviation pioneer and aerospace leader.” 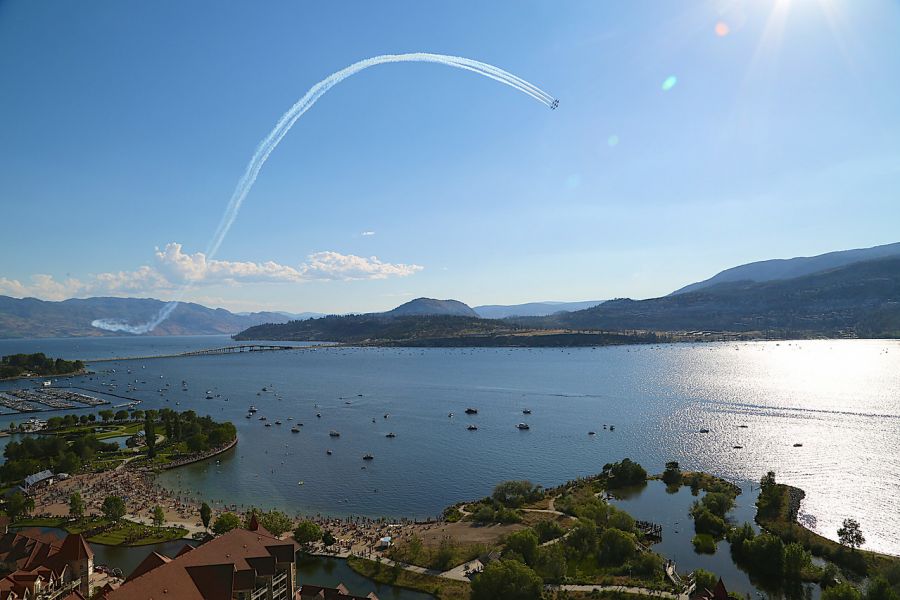 While the demonstration squad has around 80 members, 24 of which travel during the airshow season and fly at speeds ranging from 100 knots to 320 knots during an average performance.

Members will fly over the lake north of the William R. Bennett Bridge pulling breathtaking stunts while demonstrating a high level of skill, professionalism, teamwork, discipline and dedication.

The City of Kelowna noted that the best place to watch the performance will be along the waterfront from City Park to Waterfront Park.

There won't be any road closures related to this event, however, to reduce traffic and parking congestion, attendees are encouraged to choose various modes of transportation, such as biking, walking, transit and carpooling.

As part of the show, you’ll see a trail of smoke coming from the planes, which is no cause for concern.

The pilot can squeeze a trigger to release diesel fuel into the exhaust, once this happens, the diesel fuel vaporizes instantly and creates that iconic trail of white smoke.

We had a great show in Borden this weekend, it was amazing to be back in front of a crowd 😁.#Northbay, I hope you're ready for us! We're arriving tomorrow afternoon! 🙌
📷 Ron McCallum pic.twitter.com/3tbE0uXfzy

Following Saturday's CF demonstration there will be a Wings n' Wheels event, where attendees will have the opportunity to meet the CF Snowbirds and see the CT-114 Canadian Tutor up close at the new KF Centre for Excellence, located at YLW along Airport Way, 5800 Lapointe Drive, from 4 – 6 pm.

The Wings n’ Wheels event will also have food trucks, face painting, music and a car show presented by August Motors and the Vintage Car Club of Canada – Okanagan Chapter.

If you're not around this weekend to check out the crazy display, you'll have another opportunity to watch it in Penticton on Aug. 3 for the annual Peachfest celebration.