OK Tire Penticton is building on a rock-solid foundation.

The tire, wheel alignment and automotive service specialist has an 18-year history in Penticton. However, it also has an exciting, new beginning with Justin Kinvig, who purchased OK Tire Penticton last year. 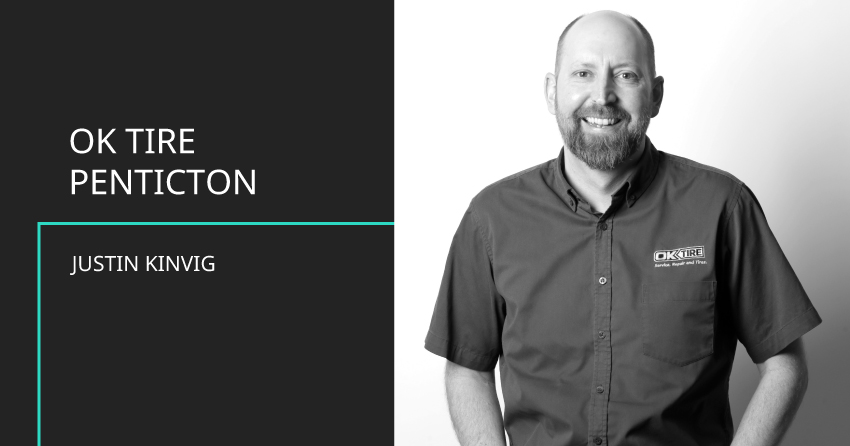 “We’ve grown the staff from three auto and tire technicians to seven and we’re opening an additional service bay to bring the count up to five.

Justin knows any business is only as strong as its team.

“We’re so fortunate to have an incredible crew,” says Justin.

“It’s the hardest I’ve worked, but also the most fun I’ve had working. We get to work on cars for a living, something we also like to do in our spare time. So, how lucky are we?”

“Cory has been racing at the Penticton Speedway for years and Max and I recently got a ‘hornet’ car to race and the other techs are getting into it, too,” says Justin.

“My first job out of high school in Penticton was changing tires and doing oil changes at Walmart,” he says.

“I also worked at the International truck dealership and Peerless trailers in parts before working in corporate human resources for the National Health Service in the UK from 2000-10 and in Vancouver with HSBC from 2010-21.”

A desire to move back to the Okanagan with his family led Justin to OK Tire Penticton.

“I love that OK Tire is honesty driven,” he says.

“I also love people and cars, so being able to give good advice and honest service to customers is the ultimate.”

Justin and his wife, Karen, and their two boys – Edward, 5, and Thomas, 2 – love spending time together and with extended family and are starting to cycle now that the boys have learned to pedal.

“I’m grateful to live, work and be able to raise a family in such an amazing community,” says Justin.