A new environmental scorecard says Canada's biggest cities have lower scores than most small and medium-sized municipalities, but a closer look at the data reveals some surprises.

The study, published Tuesday in the journal Environment International, rates 30 of the country's largest cities and towns on nine indicators related to health, including air quality, heat and cold waves, ultraviolet radiation, and access to green spaces. The results are compiled in the new Canadian Environmental Quality Index, produced by Dalhousie University in Halifax.

Daniel Rainham, the study's senior author and a professor in Dalhousie's faculty of health, says Canada's largest cities — Toronto, Montreal, Vancouver, Calgary and Edmonton — posted relatively low scores, but he says some of their neighbourhoods scored on the high end, especially in Toronto.

"It's not an easy story to tell," Rainham said in an interview. "Even though the average values may tell you one thing, there's a lot of variability within those cities."

As an example, he noted that Toronto has some of the unhealthiest neighbourhoods in Canada, though he said the city ranked highest among the biggest cities as a whole. That variability is worthy of more study, Rainham said. 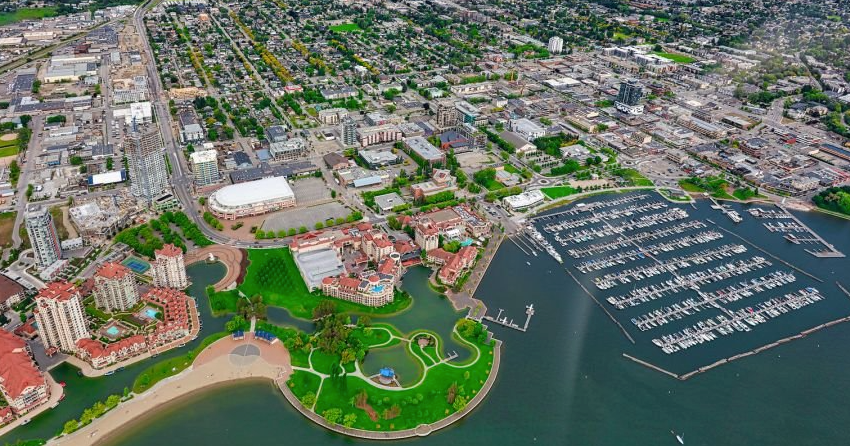 Medium-sized cities scored the highest, including Victoria, Sherbrooke, Que., and the Ontario cities of London, Guelph, Barrie, Kitchener and Kingston. As well, Halifax, Regina and Moncton, N.B., made the top 10.

Again, all of these smaller cities' results come with a caveat: "Even though they may be high on the list, they may have neighbourhoods that are not doing as well," Rainham said. "At a city level, all have some extremes."

At the other end of the scale, one small city — Kelowna, B.C. — received a lower score than all of the big cities, except Edmonton and Calgary. But some of Kelowna's neighbourhoods rated at the very top of the scale.

"You wouldn't really think that Kelowna, being nested in the beautiful fruit-and-berry valleys and wineries, would have a low score, but we're really talking about urban Kelowna," Rainham said. "But it also has one of the highest neighbourhood values as well."

The study focused on towns and cities with populations near or over 100,000.

In the middle of the pack in descending order are Winnipeg, St. John's, Hamilton, Ottawa and the Ontario cities of Windsor, St. Catharines and Oshawa.

Aside from Canada's five largest cities, the bottom of the list in descending order includes the Quebec communities of Gatineau, Quebec City, Trois-Rivières and Chicoutimi, as well as Milton, Ont., Abbotsford, B.C., Saskatoon and Kelowna in 28th place. Calgary and Edmonton are in the basement.

The study also took into account the amount of green vegetation in each neighbourhood. That's important because studies show a link between good health and being close to nature. The same correlation is true for those who live close to the water, another factor measured in the study.

Researchers also measured the proximity of residents to fuel-fired power plants, and the length of roads in each neighbourhood. But there is nothing about noise or water quality because Canada does a poor job of collecting such data.

Rainham said the long-term goal is to make all of the data available to the public by allowing residents to look at an electronic map and zoom in to their neighbourhoods.

The study was paid for by the Public Health Agency of Canada. It was co-written by Zoe Davis, at the University of Melbourne's School of Ecosystem and Forest Sciences, in southern Australia, and Margaret de Groh, who works with Canada's public health agency.

A new environmental scorecard rates 30 Canadian cities and towns on indicators related to health, including air quality, heat and cold waves, ultraviolet radiation and access to green spaces. All cities have a population close to or above 100,000, and scores are out of 100.